"The House At Riverton," by Kate Morton 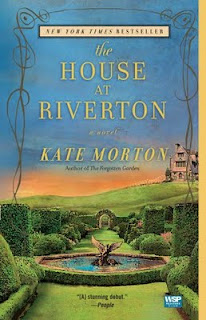 The Protagonist: Grace Bradley, a 98-year-old retiree who is asked by a filmmaker to provide historical details and advice for a movie to take place at Riverton, the house where Grace served as a maid as a young woman.
The Rub: The film is specifically about the tragic suicide of a famous war poet, but Grace, as the last surviving person who knows what really happened, is at last inspired to reveal the truth.

Hannah Hartford: Elder granddaughter of Lord Ashbury. Suffers from "progressive ideas." Wants to explore and make a difference in England's political scene, but her gender and class bar her from that dream.

Emmeline Hartford: Hannah's younger sister. Bit of a wild child, grows up to be a film actress.

Robbie Hunter: A friend and war buddy of Hannah and Emmeline's brother David. Becomes a soulful war poet. His violent death sets the stage for the novel's central mystery.

Alfred: A footman on (more than?) friendly terms with Grace who returns from the First World War greatly changed.

Marcus: Grace's grandson, a mystery writer who dropped off the grid to grieve over his wife's death. Grace starts recording her memories to give to him, in the event that he returns.

Frederick Hartford: Hannah and Emmeline's father. The second son of a lord whose business prospects invariably fail, he also shares a secret connection to Grace's mother.
The Word: In a way, the pacing of this story reminded me of a mixture of Downton Abbey and Titanic.

Downton Abbey, naturally, because like the BBC miniseries, we have an aristocratic family in the early twentieth century whose ancestral estate has an uncertain heir situation, and their lives are also witnessed and examined by their watchful servants.

And like the film Titanic, the story is narrated by the lone remaining, incredibly elderly survivor of the novel's central events, who, also like the Titanic's Rose, (here be spoilers)


went on the live a surprisingly unconventional and fulfilling life afterward, only to finally pass away right after the story is finished.
:


In The House at Riverton, 98-year-old Grace Bradley is approached by an American film director who wants to make a movie about the events in 1924 at an English manor called Riverton House, where an up-and-coming war poet named R. S. Hunter committed suicide.

Back in those days, Grace worked as a maid at Riverton House, which was owned by Lord and Lady Ashbury. Specifically, she helped wait on Lord Ashbury's granddaughters, Hannah and Emmeline - two sisters who, along with Grace, were the only witnesses to Robbie Hunter's death. While Grace starts out as an invisible observer of the lives of Hannah, Emmeline, and their brother David, she is eventually drawn into their lives by chance, becoming Hannah's particular confidante. Through her eyes, we learn the backstory of the siblings, their family situation, the upstairs-downstairs politics that Grace defies in order to befriend Hannah, and the actual real-world politics that the headstrong Hannah longs to involve herself in.

Grace is an observant, thoughtful and very human narrator, going back and forth between the events of the past, and the trials of the present. For instance, after getting a glimpse of what the upcoming Riverton film is going to look like, Grace hopes to make a recording of what really happened to pass on to her beloved grandson, Marcus, before her health ultimately fails.

There's no real mind-altering, ground-breaking story to be told here (for instance, the truth of Grace's parentage can be easily guessed within the first few chapters), but it's a solidly-developed, detailed, and well-told story about secrets and class differences and the progress of history. It's a colourful and textured snapshot of rural English aristocracy from 1915 to 1924, that is itself contrasted against the (more) modern backdrop of 1999, where the "present" part of the story takes place. There's tragedy and renewal, death and betrayal and unexpected love.

I know that it sounds like I'm damning it with faint praise, but I still thoroughly enjoyed the novel. It's a nice, meaty historical with interesting characters, excellent historical detail and context, upstairs-downstairs drama, and a tragic romance. For a novel to curl up with in a soft armchair by a fire, this is an excellent choice.B+
Posted by AnimeJune at Thursday, December 15, 2011