Re-Read Review: "Five Quarters of the Orange," by Joanne Harris 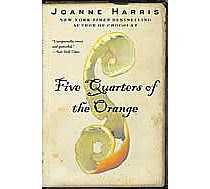 The Protagonist: Framboise Simon, nee Dartigen. For six years she's been living under her married name in the same small village she was forced to leave as a child under tragic circumstances.
The Rub: When greedy relatives threaten to expose her true identity to the villagers, she's forced to revisit the events that led to her exile, with the help of a cryptic diary/recipe book written by her harsh, neglectful, but ultimately inscrutable mother.

The Secondary Cast:
Mirabelle Dartigen: A war widow left to raise three wild children. Uncommunicative, stern, harsh, and yet not unloving, she suffers from terrible migraines and blackouts.

Cassis: Framboise's older brother. He introduces her to the German soldiers exchanging information for black market merchandise, and it's his son and daughter-in-law who harangue the older Framboise to hand over the album.

Reine-Claude: Framboise's beautiful older sister. She has a serious crush on Tomas Liebnitz, but being a pretty, docile girl in a German-occupied town comes with its own hazards.

Paul Hourias: Framboise's shy, constant, stuttering friend - both when she's young, and when she's old. As older people, he becomes her ally against a slick huckster trying to scare away her business.

Yannick: Cassis' son, and Framboise's nephew. Owns a restaurant with Laure that isn't doing well - he hopes that his grandmother's album of recipes and secrets will improve their fortunes.

Laure: Yannick's awful wife - desperate to revive her career, she'll go to any lengths to take the album for herself, and she's not afraid to play dirty.

Tomas Liebnitz: A charming, amoral German soldier who operates a blackmail scheme in Les Laveuses in order to secure better conditions for himself and his friends.

The Word: It's been some years since I last read this book. It was a Christmas gift from my Nana, back when I was immature enough to resent being gifted with literary fiction because I saw it as an attempt to "improve me" and get me read "grown-up books" that weren't fantasy, science fiction, or romance. I always read them but they usually came off like University-assigned reading - frequently pleasant but rarely strong enough to penetrate through to my true interest. However, I remember enjoying it enough to keep it on my shelf.

When I was older, however, I discovered and read Gentlemen and Players by the same author, and was absolutely blown away. Truly, its cover is pinned to the small corner of my mind where "The Classics" are, reserved for the books that weren't just good, but transcended good. The Holy Grails for which every reader keeps reading. So I impulsively decided to re-read Five Quarters of the Orange to see if it measured up.

Five Quarters operates within two stories and time periods - one takes place in the present day, where the elderly, widowed Framboise operates a small, but successful gourmet restaurant in her small childhood village of Les Laveuses. She works under her married name, hoping no one will recognize her as the daughter of the infamous Mirabelle Dartigen, a woman held responsible for a horrific tragedy that occurred there 55 years ago. The only clues to what really happened lie in Framboise's own memory and an album of recipes and secrets her mother bequeathed to her upon her death. However, Framboise's nephew and his appalling wife want to use the album to further their own careers, and Framboise must re-examine the events of the past and her mother's closely-held secrets.

The second story takes place the summer before the tragedy, with a nine-year-old Framboise and her siblings Cassis and Reine-Claude learning to adapt to their mother's migraines and erratic behaviour now that their father is dead. It's World War II, and Les Laveuses is under German occupation. Desperate to tag along and be included in her older siblings' adventures, Framboise finds herself involved in a seemingly harmless arrangement with a charming and rebellious German soldier.

Honestly, the setting drew me in more than the characters. Joanne Harris is very like Alice Hoffman in this way - the setting of Les Laveuses is as much a character as anyone else in the story. Due to their mother's illness and general bad temper, Framboise and her siblings spend most of their time as far away from the house as possible, running in the woods, fishing in the river, picking berries and mushrooms and sharing secrets up in the tree house. When they are in the house, we get mouthwatering depictions of their mother's cooking, which is the one true legacy she managed to pass on to Framboise.

In the modern story, the picturesque village setting is tainted by the forced addition of modernity, as a boisterous and hostile fast-food chain sets up across from Framboise's quiet eatery and starts (intentionally?) scaring away business.

Character-wise, the older Framboise, steeped in memory and regret and hindsight, was more understandable to me than the younger Framboise. The nine-year-old character is very believable, to be sure, but a lot of her story emerges due to her childish cruelty. Realizing her mother smells oranges before the pending arrival of a migraine, Framboise starts smuggling the fruit into the house (even going so far as to sneak pieces of orange peel into her mother's pillow) so that she can spend more time outside without supervision while her mother is bedridden. This increased freedom sets up the story and creates a devastating and fascinating ripple effect that the older Framboise discovers while going through her mother's album, but if you know anyone who is prone to migraines or chronic pain you will not like the younger Framboise one bit.

Again, though, much like Alice Hoffman, Joanne Harris knows how to balance tragedy with joy, with her beautiful writing. Even though the events during the German Occupation irrevocably changed and damaged Framboise's life, there is room and more for some happiness and meaning to seep back in. Life goes on, and while her mother's album helps Framboise understand the hard, enigmatic woman who was her mother, it also helps her better understand her own life and priorities.
While it didn't have the same life-destroying awesomeness of Gentlemen and Players, Five Quarters of the Orange is still an excellent book, full of secrets, gorgeous description, delicious recipes (I want to try the one for raspberry liquor!) and a great story.
A
Posted by AnimeJune at Sunday, March 18, 2012