"Crazy For Love," by Victoria Dahl 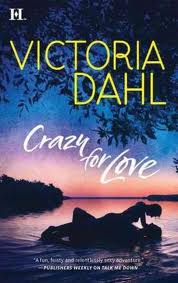 The Chick: Chloe Turner. An ordinary accountant who just wants to relax at a secluded resort after her fiance took "getting cold feet" to a desperate extreme and turned her into a media laughingstock.
The Rub: There she meets the delicious Max Sullivan, but what will he think when he realizes she's America's Most Infamous Bridezilla?
Dream Casting: Natalie Portman.


The Dude: Max Sullivan. A famous treasure hunter who's more than ready for a little R and R - provided there are no women involved.
The Rub: He runs into Chloe and instantly likes her - but what will happen when his anxiety disorder becomes too much for him?
Dream Casting: Josh Holloway.


Chloe: Time for a vacation! Without paparazzi!

Max: Time for a vacation! Without ladies! Crap! That totally sexy, desirable woman is lighting an unsafe fire! I MUST RESCUE HER!

Max: WE SHOULD BONE! I mean we should date FOR YOUR OWN SAFETY because you're adorable!

Max: CURSES! MY MASTERFUL DISGUISE HAS BEEN FOILED!

Paparazzi: Hey look! Chloe! Chloe! What's it like having photographers show up to reveal you're the Bridezilla and provide some much needed romantic conflict?

Chloe: ARE YOU EFFIN' KIDDING ME?!

Jenn, the Pathetic Best Friend Who Cries During: BEE TEE DUBS I KNEW YOUR FIANCE CHEATED AND DIDN'T TELL YOU BECAUSE OF MY PATHETIC MAN ISSUES!

Chloe: Stop the crazy train! I want to get off!

Chloe: Let's make a deal - you stick around for longer than five seconds and I'll give you an HEA.

Romance Convention Checklist:
The Word: Chloe Turner should have been on her honeymoon. However, instead of helping her with their wedding plans, her spineless old-money fiance tried to fake his own death to get out of marrying her, and when he was caught, he vilified Chloe in front of the press to take the blame off himself.

Now Chloe's possessions are crammed into a tiny apartment, she's followed by paparazzi wherever she goes, and her face is plastered across every tabloid and internet gossip site under the caption "psychotic bridezilla." Her best friend Jenn hopes that taking Chloe to a remote island resort off the coast of Virgina will give her enough privacy to relax in the weeks leading up to her fiance's trial for fraud.

While there, she meets Max Sullivan, a marine treasure hunter (for reals) who's on holiday with his recently-divorced brother Elliott. Max has a reputation for wild ways and wild women, and he takes an immediate interest in Chloe as she and Jenn start a bonfire on the beach.

Unbeknownst to Chloe, his brother, or anyone in his life, Max suffers from an undiagnosed and untreated anxiety disorder similar to OCD that compels him to take responsibility for everyone around him. Everyone. Literally everyone - with friends, family, complete strangers, he becomes hyper-aware of every possible thing that could go wrong and is compelled to go in and control the situation to his satisfaction. And because people (for some strange reason) don't like being ordered around by a Stranger Creeper Whom They've Never Met, Max has carefully cultivated a charming personality that allows him to manipulate people into safer situations with no one the wiser.

This also influences his relationships - leading to an unerring tendency to date needy, dramatic girls out of a desire to "fix" them. How lovely.

Anyway, Max is tired. Exhausted. The stress of physically worrying about everyone he comes into contact with is killing him - albeit not enough to seek therapy or medication (more on that later). His solution is simple: isolation and celibacy. That is, until he sees two hot ladies trying to build a fire. A fire that is dangerously close to dry, combustible seagrass. He starts flirting with Chloe in order to maintain fire safety, and is compelled to invite himself on their diving trip when he learns Chloe hired a diving instructor from a grocery store. In the process, he finds he really likes Chloe, but he mentally cannot handle another relationship so he's stuck fighting his attraction and his desire to shield Chloe from drowning and sunburn and shark attacks and the bends.

Chloe, at first, just thinks Max is super-interested, but she figures out his problem quickly enough once he tries to seduce her out of skinny-dipping at night, and she calls him on it. Max is shocked - no one's been able to see through his charming disguise to the controlling nervous wreck he really is - but he's also relieved to find someone he doesn't have to hide from. What will happen, though, once Max finds out that Chloe is America's Most Infamous Bridezilla?

My biggest problem with Crazy For Love was the fact that, for a novel that has the word "Crazy" in its title and a hero who suffers from a severe anxiety disorder, the story never deals with the mental health implications or possible treatments for Max's problem. The author goes to extreme lengths to demonstrate how stressful Max's condition is - he's mentally incapable of relaxing around other people, regardless of the situation. He's continually worrying about fire alarms and how close someone's standing to a railing and the diseases you can get from bugs. The reader gets to see first hand how desperately unhappy he is.

And yet the idea of going to therapy or getting treatment for this problem never comes up. Max never even thinks about it. No one suggests it. Chloe, in fact, treats it like a cute foible, just another wacky part of his personality. This bothered me for three reasons:
The third reason really got to me, especially considering Chloe's personality and past. Thanks to her cowardly fiance, she had to spend an entire month cut off from her regular life and the people she cares about because of the scalding media attention. She describes in detail how trapped and alone she feels - so why would she agree to a restrictive, lonely existence in order to sooth Max's issues rather than actually dealing with them?

As well, I found the romantic conflict really confusing, especially once Max finds out about Chloe's Bridezilla reputation and Chloe realizes how Max gravitates towards needy women because he feels responsible for them. Max loves her, but he doesn't want her to need him, because then he'll only love her because he needs her to need him? Chloe needs Max, but she doesn't want him to stay because she needs him, she wants him to stay because he needs her? What?

There's also a rather drippy secondary romance between Chloe's Secretly Guilty best friend Jenn and Max's brother Elliott, some sex scenes that really didn't contribute enough to the story this time around (something that Victoria Dahl's usually really awesome at), and I thought the ending was a little too pat for me (especially considering the paparazzi).

Despite solid writing and some hilarious dialogue ("Holy ass cheeks, Batman!"), I wasn't crazy for Crazy for Love.
C

You can purchase Crazy for Love here.