"The Land of Stories: The Wishing Spell," by Chris Colfer 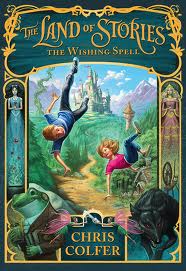 Our Protagonists: Connor and Alex Bailey. After their loving, storytelling father dies in a car accident, they have a hard time seeing the magic in everyday life - until their grandmother's mysterious book of stories sucks them into a world where fairy tales are real.
The Rub: The trouble is, now they can't go back - unless they go to each of the kingdoms and find the ingredients to create the Wishing Spell, the only magic powerful enough to send them home.

Froggy: A frog (surprise surprise!) who's under a curse because of his vanity. Fond of lily pad tea.

Goldilocks: An infamous outlaw who's had to live her life on the run ever since she was unjustly accused of burglary.

Red Riding Hood: Queen of the Red Riding Hood Kingdom (who'd have guessed?) - a queen who'd prefer to wear pretty dresses and pose for portraits than run her kingdom (her granny does most of the work).

The Huntress: The mute daughter of the Evil Queen's Huntsman who's racing to get the pieces of the Wishing Spell before the Bailey twins do.

The Word: I had to admit I was a little nervous when Chris Colfer (the actor who plays "Kurt" on Glee) announced he was working on a novel - but then he gave the speech at BEA's Children's Book and Author Breakfast (where I coincidentally received an ARC of this book). He made his novel sound like a real labour of love for him, and I love fairy tales, so I was eager to give this novel a shot.

Unfortunately, The Land of Stories did not measure up - mainly because it didn't seem ready. It read like the first draft of a very young, promising, but untutored writer: the book's not missing for creativity or wit, but the writing style is amateurish, the narrative is disorganized and contrived, the tone is patronizing, and the ham-handed messages the story tries to force down the readers' throats are either vague, unhelpful, cliched, or wrongheaded.

Alex and Connor Bailey are twin siblings who are struggling to move on after the death of their father. Their mom has to work double shifts to make ends meet and they're not doing much better at school - Alex is an overachieving know-it-all who is ostracized by her classmates, and Connor is forever failing tests and falling asleep in class.

Things are so stressful they almost forget the arrival of their twelfth birthday, which their mother has to work through, but thankfully their beloved grandmother arrives in the nick of time with her bright blue car and her book full of stories. They have a lovely birthday, and while their grandmother has to leave the next day, she leaves them her copy of The Land of Stories.

As expected in a fantasy middle grade novel, the book starts glowing and humming and a few pages later the twins end up falling into the book and landing in The Land of Stories, where all the famous fairy tale characters are real. However, it's a world of dangers as well as of wonders, and they  discover the only way they can get home is to summon the Wishing Spell - a powerful magic that will require an object from every major fairy tale. Unfortunately, the notorious Evil Queen (Snow White's stepmother) has escaped from prison and is also looking for the Wishing Spell, and she'll stop at nothing to get it.

Now, this is a decent enough set-up, but The Land of Stories is hobbled right out of the gate thanks to an incredibly distracting reliance on passive language. What is passive language, you ask? Passive language is a writing style that over-relies on the verbs "to be" and "to have." Example: "Connor's eyes were bulging out of his head." The primary verb in that sentence is were, a passive verb, when it could have so easily been bulge, an active verb (as in, "Connor's eyes bulged out of his head").

Long story short, passive language is horrible and annoying because it is literally "telling instead of showing." It keeps the reader at a distance instead of placing her in the middle of the action. The whole book is written like this - the reader is simply told "this magical thing was gorgeous" or "the castle was enormous" or "this character looked sad" instead of being shown these things with description.

This, of course, leads me to my second problem with the novel: its tone. I don't know if the author has read very much Middle Grade, but there is a definite sense in this novel of "talking down" to readers. Thanks to oversimplified, passive language as well as the "moral lessons" (more on that in a bit), the novel often comes across as patronizing. I don't know about you, but kids don't like being told what to do, what to think, or what to notice - they like to discover.

Unfortunately, there's not a lot to discover here. The world building for The Land of Stories is colourful, but disappointingly undefined and convenient. The minute the twins mope that they'll never find that one thing they're looking for - that one thing or the one person who could produce that one thing miraculously turns up and hands it to them.

My last problem was with the book's "moral lessons." Now, normally I'd let such things lie, because everything about literature is pretty much open to interpretation, but The Land of Stories proves the exception because the use of fairy tales to teach social lessons is a major theme of the novel. And some of those "lessons" that are unsubtly hammered home are so uninformed and naive as to be ridiculous, but because I want this blog post to end at some point, I will focus on one.

Snow White's Evil Stepmother is the central antagonist of the book, but in the prologue, where she's sitting in prison being interrogated by Snow White herself, she quips, "What the world fails to realize is that a villain is simply a victim whose story hasn't been told." Wait, what? For most of the book, as the story keeps dropping hints about the Evil Queen's mysterious past, I hoped that this sentence would simply prove to be a woefully poor choice of words. Unfortunately, the rest of this review require spoilers, so you have been warned.

By the end of the book, we learn that the Evil Queen was once an innocent woman in love who was kidnapped by an Enchantress, who then cursed her true love into a magic mirror. The Evil Queen's subsequent actions were all fueled by her desperate search to get her lover out of the mirror before he lost his identity. Now, that's an interesting story and provides a deeper motivation for the Queen's actions than simple vanity - however...

HOWEVER - the novel treats her tragic quest for love as justification for the terrible things she did. As in, the fact that she did it for love (cue singing birds) makes it okay. Her loyal Huntsman calls her a saint. All the other princesses cry when they hear the Queen's story and gush about how it was all for love (cue dancing mice) and how cruel the world was for senselessly hating her, and how nobody would give her compassion and understanding.

Yeah, how dare the world hate her - for neglecting, imprisoning, and MURDERING her subjects (including Snow White's parents!). Couldn't they offer her a little compassion and understanding when she was busy poisoning apples and ordering the Huntsman to cut out a teenage girl's heart, because it was all for LOVE (cue showers of rose petals)? Even Snow Freakin' White says the Evil Queen's "broken heart" was punishment enough for her actions - um, you mean, like HER PREMEDITATED MURDER OF YOUR PARENTS?

And of course, this all culminates in the twins realizing that most villains are "villainized by circumstance."

How about NO. NO NO NO a million times NO. There is a difference between humanizing a character and justifying their actions. The Evil Queen's backstory does an excellent job of revealing her human motivations and frailty - does it make her a deeper, more interesting character? Sure! Does that make her a morally good character? NO. She was not villainized by circumstance, she became a villain by choice. No one forced her at dagger point to poison Snow White's parents. No one forced her to try to feed a bunch of people to wolves. She made a conscious choice to do those things and I cannot BELIEVE that such a naive, irresponsible message of the ends justifying the means would be one of the MAJOR MORALS OF THE NOVEL.

Especially since, as I recall, quite a few fairy tale heroines were dealt crappy hands by fate but nevertheless managed to avoid MURDERING PEOPLE WITH COMBS. Here endeth the rant!

As it is, despite a few poignant scenes and, admittedly, quite a few hilarious lines of dialogue from Connor, The Land of Stories is a profound disappointment. Its worldbuilding is inconsistent and trite, its pacing is all over the map, its writing is clumsy and immature, and it doesn't reveal as many original things about fairy tale characters as the back cover blurb would have you believe. I wish Chris Colfer all kinds of success in his acting and screenwriting career, but I won't be visiting The Land of Stories again.
D+

The Land of Stories: The Wishing Spell is available for purchase July 17th. You can pre-order it here.