"Every Day," by David Levithan 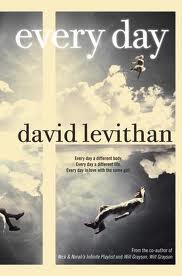 Our Protagonist: "A." A genderless entity who wakes up every day in the body of a different person, living their lives and accessing their memories to get by.
His/Her Angst: A's stringless, rootless existence acquires a hitch when A falls in love with a girl named Rhiannon. When he's a boy one day, and a girl the next, how can A have a life with Rhiannon?


Rhiannon: The girl A meets and falls in love with. Rhiannon is a kind, intelligent girl but one who desires certainty -  can she learn to love A back, regardless of the body A's wearing that day?

Justin: Rhiannon's jackass boyfriend, with whom Rhiannon stays because she wants to believe it can work.

Nathan: A boy A possessed for a day who finds out about A's identity. Fears A might be a demon, and is willing to turn to anyone willing to give him answers.

Reverend Poole: A shifty figure who "counsels" Nathan and takes Nathan's story public, calling for experiences from anyone else who's come under A's influence.

Angst Checklist
The Word: Every Day is a truly remarkable, original book. I was fascinated not only by the utter uniqueness of the concept, but the also how brilliantly that idea was executed.

Every day, A wakes up in a new body. Boy, girl, it doesn't matter - the only constant is that the bodies are all the same age as A (16), and they're all people who live within the same general vicinity (Maryland). A spends the days accessing the hosts' memories and borrowing their lives without making too many waves. A is very strict with what can be done with the bodies - after all, A will wake up the next day as someone else but yesterday's body will have to deal with the consequences.

Everything changes when A wakes up in the body of Justin and falls for Rhiannon, Justin's downtrodden girlfriend. They have a wonderful, life-changing day together, but suddenly A is no longer satisfied with taking life one day at a time. No matter how many days pass and how many different people A wakes up as, A's love for Rhiannon remains. Determined to find a way back to Rhiannon, A starts breaking the rules - and comes to learn more about the importance of existence, appearance, and memory.

A is a fascinating character. A's love for Rhiannon is so new because A has spent his/her entire life without any consistency or constancy whatsoever. A has a very fluid identity that is defined by a strong moral responsibility. A doesn't want to make trouble for the bodies s/he's in after s/he leaves, so s/he's tried to live by their desires and interests - striving for their goals, loving their significant others. However, once s/he meets Rhiannon, A develops his/her own desires and interests and suddenly has to weigh those priorities against maintaining the status quo for the person whose life s/he's borrowing.

While the central story revolves around A and Rhiannon and whether they can or even should strive for permanency together, David Levithan deftly uses A's body-hopping to explore the different paths teenage life can go down, little flashes and glimpses of the highs and lows of life. A wakes up in so many different people - an illegal immigrant maid, a drug addict, a track runner, a musician. Some of these lives A borrows are truly terrible, and this leads to some interesting moral debates: is A obligated to leave their lives exactly as s/he found them, or should s/he try to improve them? Is A only a guest of happenstance, or does A wind up in certain people's lives for a reason?

If I could compare Every Day to any other piece of literature, I might be tempted to go with The Time Traveler's Wife. A's abilities and their mysterious origins give A a unique perspective on the world, but the love of A's life, Rhiannon, is just as important of a character even though the story is told entirely from A's POV. A has trouble comprehending why physical differences like biology, body size, gender, and sexual preference matter - s/he's been all of them while remaining A on the inside.

Everyone wants to believe that what's on the outside doesn't matter. Rhiannon, however, demonstrates just how naive and unrealistic that belief is as she interacts with A over several days and different bodies. For instance, Rhiannon is straight - even though she knows it's A in the body of a girl, that body does affect how they interact. The novel explores this concept with depth and dignity, never taking the easy way out or dismissing Rhiannon's concerns as shallow or superficial. Some things don't matter, regardless of outward appearances - but certain things always will.

Every Day is a heartbreaking, challenging, romantic, thought-provoking, endlessly-debatable and incredibly entertaining novel about the nature of love. I continue to think about it - I will probably always think about it, and I want to be thinking about it years from now. While I do think the ending is a little unclear in regards to A's future motivations, it's not really the ending that matters so much as the exploration of such a powerful idea. A future classic.

Please forgive me - I started reading this ARC after misreading the pub date as August 8th. Instead, Every Day is only available for pre-order and will be out August 28.

Labels: A Plus Reviews, contemporary, Fantasy, YA