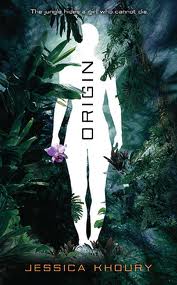 The Protagonist: Pia. Born in the hidden scientific community of the Little Cambridge Research Facility after five generations of breeding and experimentation, she is the new face of the human race: invincible, immortal, and perfect.
Her Angst: Trouble is, she doesn't feel perfect - she feels stifled and lonely. And what are her creators - her scientist "aunts" and "uncles" - hiding from her about her origins?

Uncle Paolo: The head scientist of Little Cam. Responsible for Pia's upbringing and education, he trains Pia to believe that she is the next necessary step for the human race, a next step that needs to be preserved, maintained and controlled - at any cost.

Uncle Antonio: Pia's favourite Uncle, he loves and supports her, even as he expresses a mysterious unease with the direction her training is going in.

Eio: A boy from the Ai'oa tribe of South American natives who live near Little Cam, who befriends Pia. He shares her sense of not-belonging - after all, he's only half Ai'oa. His father, whom he refuses to name, is also a scientist in Little Cam.

Angst Checklist:
The Word: Pia is perfect in every way. She knows this because she's been constantly reminded of this fact for seventeen years by every scientist in the secluded research facility of Little Cam, located deep in the Amazon rainforest. The result of generations of genetic and biochemical testing and an experimental drug called Immortis, Pia has heightened senses, sharper reflexes, a flawless memory - and an eternal lifespan. That's right, Pia is immortal - she will not age past twenty and her skin cannot be pierced. She is the reason for Little Cam's existence and its greatest scientific success.

The only person who tells her differently is her Uncle Antonio who tells her that "perfect is as perfect does" (thank you, Rainforrest Gump), all the while significantly wincing and grimacing to indicate he Knows More Than He Lets On.

The first few chapters of this novel are genuinely intriguing, particularly the descriptions of life in Little Cam and the Amazon rainforest setting. Everyone on the staff, from the head scientists to the laundress, is referred to as "Aunt" or "Uncle" by Pia. Each scientist has their own lab and specialty, and Pia learns from all of them and assists in their experiments. However, Pia is only permitted to study scientific and mathematical subjects (literature and history are forbidden), there are no world maps on the site and no one is permitted to mention city names or geographical locations. Pia's never been allowed outside Little Cam and has no idea where Little Cam is.

For all of her seventeen years, Pia has been studying to become a scientist in her own right and join the Immortis team in order to help engineer more immortals like herself. Even though she's still a teenager, she's terrified of the inevitability of outliving everyone she knows and being left alone, and believes helping to create a perfect, undying human race is the only way to avoid this.

Of course, all that changes when a storm-toppled tree leaves a hole in the electric fence around Little Cam. Pia's curiosity gets the better of her, and not five minutes after crawling into the outside world, she runs into a devastatingly hot native boy with washboard abs and sky-blue eyes.

Naturally, Pia's infrequent adventures outside of Little Cam with the Hot Boy (named Eio) and his fictional Ai'oa tribe clue her in to the fact that Creepy Unexplained Things are Afoot at Little Cam and that her scientist Aunts and Uncles may be paying a higher price for Pia's immortality and special abilities than she initially believed.

My first problem? The Instalove. Gross. Nothing says True Love like a hormonal, isolated teenager falling for literally the first boy with abs she's ever seen! The fact that their adventures occur over the span of a week, ending with undying, eternal love makes so much character sense. Right.

Secondly, don't even get me started on the theme of the Special White Girl being "chosen" to save a tribe full of brown people.

Thirdly, the characters - Pia and Eio. Pia did have some depth - I appreciated how alone she felt in Little Cam, how scared she was of the idea of being alone while everyone grows old around her. I liked how goal-oriented she was and how determined she was to keep learning in order to achieve that goal. That being said, her world-weariness at being immortal seemed contrived and unrealistic, considering she's still the youngest person in Little Cam, has never encountered death, and hasn't outlived anyone yet. I also got annoyed really quickly with her goopy InstaFeelings for Eio and her constant waffling. Once she falls for Eio she seems to lose all her drive and her self-confidence in her own intelligence.

And I had far less understanding for Eio. I thought he was an emotionally manipulative prick who is constantly objectified by the narrative - he's apparently allergic to wearing shirts and his exoticism is always overplayed. He's frequently referred to as "the wild jungle boy," who lives as one with the trees and the monkeys with his uninhibited shirtlessness.

I might have tolerated the Instalove a little more if it wasn't constantly used as an excuse for both characters to act like complete fucking morons. Pia makes dozens of flat-out ridiculously stupid decisions because of Eio, and Eio has an unintentionally hilarious scene where he nearly kills himself trying to climb an electric fence to get to Pia, repeatedly shocking himself over and over because he just loves Pia too much - or at least too much to stop, use the brains God gave a butternut squash, and formulate a plan that actually works.

As to the novel's themes, while I appreciated the exploration of morality and ethical responsibility with regards to scientific experimentation and research, I thought the battle between Cold Hard Emotionless Science and Loving Homegrown Spiritualism was way too obvious and black and white. The storytelling itself is also exaggerated, ham-handed and almost cartoonish in places - I'm sorry, but the minute an absentminded scientist "accidentally" creates ants that "thirst for human flesh" but keeps them alive FOR SCIENCE! - the story loses all realistic credibility with me.

Everything was just a little too exaggerated for me with Origin - the Instalove, the Instantly Evil!Scientists, the purely good and spiritual natives, the man-eating ants (for reals). There are some good ideas here and some excellent scenic description, but not enough realistic characterization or emotional depth to hold my interest.
C+

Disagree? You can purchase Origin here.