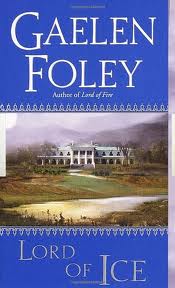 I've had a bit of a weird reading experience with Gaelen Foley. Her debut novel, The Duke, was a marvel.

This third novel - had nothing. Nothing. It wasn't terrifyingly bad, but it offered absolutely nothing new, and it traded on tropes that were undeveloped.

The novel opens with a painfully obvious prologue that's meant to spell out the entire plot -  an Evil Viscount is going bankrupt, so he murders his alcoholic war veteran brother in order to get at the fortune of his illegitimate niece (the daughter of their older, deceased brother and his mistress). Unfortunately, the 50,000 pound inheritance is signed over to the girl's name, so the Evil Viscount will have to murder her, as well, to get his hands on the money.

An Evil Viscount wants to the kill the heroine - got that?

So the Sex Cult Spy guy from the previous book (Lucien)? Turns out he has a twin brother, Damien, who fought in the "real Army," so to speak, leading to their eventual falling out. Damien is suffering from some pretty severe PTSD, where dreams, loud noises, and bright lights can set him off and make him believe he is back in Spain. He's been hiding out at his newly-bestowed estate when he learns that a war buddy of his has been murdered, but not before he named Damien as the new guardian to his ward in his last will and testament.

Meanwhile, our plucky future murder victim heroine Miranda is currently studying Angst and Resentment at St. PedoBear's School for Molested Orphans. While she dreams of her neglected guardian riding up to take her away from the awful living conditions, she also secretly works as an actress with a local theatre troupe to save up money and an escape plan.

It is as an actress on the stage that Miranda first gains the attention of Damien, who has ridden over to collect his new ward but stopped to catch a show first. Damien supports local theatre, y'all! Damien is immediately attracted to the Hottest Woman in the Room (Miranda), and Miranda is immediately attracted to the Hottest Man in the Room (Damien). And I am bored with both of them.

Damien, who has been avoiding women and liquor since his last PTSD-induced mental episode in Lord of Fire, figures one quick bang can't hurt, and he waits outside the theatre to sexually harass and force a kiss on Miranda despite her repeated and vocal rejections. But she likes the kiss so it's okay!

However, at this point of the novel Miranda is an entertaining, intelligent, and saucy creature so she makes a break for it once Damien turns his back to summon the carriage. Unfortunately, she runs into a pack of suspiciously-organized thieves and vagrants. Damien rides to her rescue, but the conflict induces his PTSD (which is depicted in this novel as a kind of mental lycanthropy that Damien can sense coming and warn people away from), and he ends up throat-ripping a bunch of dudes to death with his bare hands, MacGruber-style. Miranda, showing admirable intelligence and restraint, runs like the dickens.

Then next day, Damien shows up at St. PedoBear's to pick up Miranda and is appalled to learn that a) the school won't take care of her anymore because she's failing the required courses of Being Molested and Being Young Enough For the Pedophile Reverend and b) she's the very same actress he ripped throats for the night before.

He adapts and agrees to take Miranda with him to meet his family, but Miranda's no longer willing to leave - she realizes that once she's gone, her young friend Amy will become the star pupil in the Being Molested course. She plays along with Damien until they arrive at a nearby inn and then attempts to flee back to the school, with the idea of snatching Amy and hieing off with the travelling theatre troupe.

Damien catches her, though, and forces the teary Miranda to confess her matriculation in Child Abuse. He storm the school in true Kick-Ass Hero fashion, busts the reverend and saves the kiddies - earning Miranda's love and admiration and effectively killing off the interesting aspects of her character.

See, before this, Miranda's quite an entertaining heroine. She's innocent without being naive, naughty without being childish. She handles situations practically and she shares some hilarious dialogue with Damien. However, once he brings down St. PedoBear's, the story rather explicitly transforms her into a different character entirely, as if by magic:

"She felt so strange. A quiet, womanly acquiescence settled over her with a willingness to set aside her childish ways; her tinselly, adolescent dreams of theatrical fame; and all her angry, headstrong willfulness. Instead, she would accept this strong, just man's rule, as though his very gentleness had already begun to tame her."


A more wall-banging paragraph I've never read. So, in one paragraph, Miranda gives up her dreams, career ambitions and cleverness in favour of the "more noble" ambition of Being Loved. Damien, after seeing only one performance, asserts that Miranda only acts so that she can confuse the applause with affection. You know, not because she's good at it (which she is), or because she enjoys it (which she does). Because The Man knows best.

Thus, in one paragraph, Miranda morphs from an interesting character in her own right into yet another Blankly Virtuous Heroine with No Self Esteem whose sole narrative purpose is to soak up the Hero's Dark Man Pain like a human Paper Towel of Lurve. In her new role as the Quicker Angst Picker-Upper, she basically spends the entire novel trying to get into Damian's pants while simultaneously believing she is unworthy to even pop the first button on his Lofty Aristocratic Fly.

The main obstacle, if you can call it that, is Damien's poorly-written and developed PTSD. At one point, Miranda tries to wake Damien up from a bad dream and he nearly strangles her to death. This, rather understandably, leaves Damien nervous about entering into a relationship. When Miranda asks Damien's bro Lucien for advice, this interchange happens:

[Miranda:] "But what happens if I approach him and he turns dangerous again? I told you what took place at the hotel. He could have killed me already."

"Stand up to him, girl," he said heartily.


Really, truly. If Damien, a 200-pound Alpha Male, tries to choke the life out of Miranda again, she should just stand up to him. Yes. That makes perfect sense.

And the rest of the book continues in this dreadfully boring and unoriginal fashion. It almost seems as if the author was working off a checklist of things that Have To Be In A Romance. The heroine marvels at all the luxury while feeling herself to be a poor, unloved orphan. The hero's family members are all unconditionally accepting. The heroine's ex shows up and makes an ass of himself for no reason and then disappears never to be seen again. The Evil Villain develops an unhealthy attraction to the heroine - again, for no real reason but to make him Even Eviler. Damien's PTSD magically disappears.

I gave up around page 260 when it wasn't even camp enough to be entertaining - it just felt rote. Skimming ahead, I was pleased to note I missed a last-minute conflict where Damien has to return to the front because Napoleon's escaped from Elba and Miranda whines about how selfish Damien is to choose his country's safety over her - the same last-minute conflict that occurred between the protagonists in the last book.

It wasn't only the fact that the novel was boring that made me frustrated - but the fact that all the overused tropes that bothered me in this book are so. Damn. Prevalent in romance. I've already whittled down most of my romance TBR to already-proven romance favourites and a very few interesting-looking new titles, but books like Lord of Ice almost make me want to give up on the whole genre.