"The Song of Achilles," by Madeline Miller 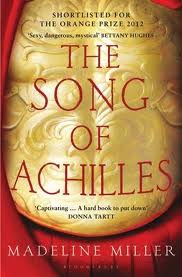 The Protagonist: Patroclus. When he is banished from his homeland by his unloving father, Patroclus is sent to another land to be fostered and befriends the crown prince, Achilles. Before long, their friendship develops into something more.
His Angst: However, it is clear to everyone that Achilles is destined for Greater Things - even if it comes at the cost of his own life.

Achilles: Son of a god, fated to be the greatest warrior of his generation, he has lived his entire life believing he is destined be immortalized in history - but how he'll leave his significant mark on the world is still in question.

Chiron: A sober and dedicated centaur who trains and educates Achilles and Patroclus as teenagers.

Thetis: Achilles' mother - a powerful sea nymph who has lofty ambitions for her son and sees Patroclus as a demeaning obstacle to those ambitions.

Agamemnon: The general of generals of the Greeks during the Trojan War - as well as a bully and a pig who resents Achilles' fame and cocky attitude.

Breseis: A young woman captured as a war-prize during the Trojan War, rescued by Patroclus and Achilles, and kidnapped by Agamemnon - sparking Achilles' withdrawal from the fight.

Odysseus: The cunning, wily King of Ithaca who is sent out to find Achilles and enlist him to fight in the Trojan War.

The Word: The Song of Achilles tells the story of the events leading up to the Trojan War, from the point of view of Patroclus, Achilles' male lover. In many narratives of the Trojan War, Patroclus' character is often given the shaft (and not in the good way), most especially in the Brad Pitt film Troy, in which he was rewritten as Achilles' cousin. That sound you hear is me, plucking the tune from Deliverance on a lyre.

However, Patroclus' viewpoint adds so many different layers and dimensions to a familiar tale - through his eyes, the novel is a romance, an examination of the nature of fame and immortality, and the importance of maintaining one's own identity and principles despite being surrounded by socially superior peers.

Patroclus is perfectly average in every way, which is a nice thing to be in modern times but in Ye Olde Hyberbolic Greece, in the age of heroes and deities and demigods and monsters, he's a bit of a limp noodle and a huge disappointment to his kingly father. When he accidentally kills another boy while defending himself, his father strips him of his princehood and sends him away to be fostered in another kingdom.

There, Patroclus meets Achilles, who is his polar opposite - golden, gorgeous, talented, and beloved by all. Born of a union between a human king and the sea-nymph Thetis, Achilles has been raised beneath the banner of a prophesy that foretells him becoming the greatest warrior of his generation. Despite being almost unbearably privileged, Achilles is generous and kind-hearted, and the two of them become friends, and then inseparable lovers.

And that's when that bitch Helen runs off with Paris and ruins everything. As the Greek kings assemble their armies to go to war against Troy, Patroclus and Achilles realize that this is the war Achilles is fated to become the greatest warrior in. There's only one catch - when Thetis reluctantly shares the rest of the prophesy, she reveals that Achilles is also destined to die during the war.

Patroclus is appalled - why not stay home then, avoid the war, and live to a ripe old age in obscurity? And yet, that is not an option in this version of mythic Greece - where the gods are present and their blood flows in countless half human descendants. Achilles is half-god, and yet immortality is denied him - the only way to access that godly part of himself is to strive towards the only immortality a human can attain: glorious fame in battle, that will be sung long after the battle is over and the bones are buried.

So Achilles and Patroclus sail to Troy with the rest of the Greek army - and with Achilles' doom hanging over their heads.

Part of the reason why I enjoyed this novel so much is the fact that it's narrated from the viewpoint of the story's Xander. Now, if you're unfamiliar with the show Buffy the Vampire Slayer (FOR THE LOVE OF GOD, WATCH IT. IT'S ON NETFLIX), Xander was the one character who remained a magicless, regular human being through all seven seasons - because of that, he was the character through which the magicless, regular human being audience could access and express their feelings for the show, because his viewpoint was theirs.

Patroclus is the Xander to Achilles' Buffy. Patroclus is no one special - he's not great at fighting, he's not descended from a god, he's not brave or particularly cunning or even handsome. And yet, he is an intelligent observer (a common trait in Xander-characters) - and can interpret the events going on around him in a way that is accessible to the reader.

Because he has no stake in achieving any sort of glory, Patroclus' observations show a keen insight into the nature and ultimate emptiness of fame. He sees the death, rape and destruction of the war. He witnesses how petty and vengeful the assembled kings become if they feel their fame (and thus their immortality) is threatened, and how little their honour means in the greater scheme of things. He also knows the joy that comes from sharing a life with Achilles, and despairs that it isn't enough to keep Achilles from pursuing his destiny.

The romance between Achilles and Patroclus is another fantastic element to the story. Despite Achilles being phenomenally blessed in all ways, their relationship never feels unequal. Achilles adores Patroclus, passionately and devotedly, and their homosexuality is never a huge source of conflict. They get a few side-eyes, but the biggest opponent to their relationship (Achilles' fiercely protective mother, Thetis) reviles their love because she believes Patroclus is disgustingly inferior to Achilles, not because Achilles is in love with a man.

As well, the writing in this novel is simply gorgeous. Poetic while still accurate and readable, it gives a suitably epic cast to the story while still maintaining the private, humming tension of intimate scenes. Even the characters with smaller roles (like Odysseus and Chiron) are given hints of depth and backstory to illuminate their presence in the narrative.

You can purchase The Song Of Achilles here.

Posted by AnimeJune at Saturday, September 29, 2012