"Amelia Anne is Dead and Gone," by Kat Rosenfield 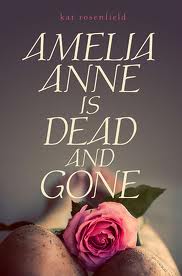 The Protagonist: Becca. Graduated salutatorian from her high school class, she has a bright future ahead of her - and, most importantly, outside of her stifling small town.
Her Angst: When her boyfriend dumps her on the same day an unidentified corpse is found outside of town, she wonders if planning any sort of future is possible if everything is ultimately unknown.

James: Becca's highschool drop-out boyfriend. Broke up with her right after having sex on graduation night. Regrets his actions afterwards, but is there something else going on?

Amelia Anne Richardson: A college grad who discovers late in her education that her passion is for theatre, not business. But will her boyfriend approve of her switch?

Craig: The troubled, sadistic son of the town success story, who brags about how the murder happened right outside his backyard and refuses to let the cops search his property.

The Word: This was an impulse grab for me. While I was at a library for a very successful NaNoWriMo write-in, I saw this jutting out of the shelf and recognized it as a book from my Wishlist that had come highly recommended from an extremely respected source (author and videoblogger John Green), so I grabbed it and jumped into it right after finishing Sacred Hearts.

Becca has her whole life planned out. After graduating with high marks, she'll spend one last wistful summer with her boyfriend James in their backwoods New England town and then drive away to experience the world - eventually leading her to law school and on to a successful career in a big city.

However, two things happen on graduation night that smash her confidence and unhinge her desire to do anything but stay put. One, her boyfriend James (a troubled high school dropout), cruelly breaks up with her after one last bang; and two, the battered, unidentified corpse of a young woman is discovered by the side of the road outside of town.

As their small community erupts into a fevered frenzy of gossip and speculation, Becca retreats further and further into panicked paralysis. She identifies with the nameless victim - a young woman who, despite her own well-laid plans, met her bloody fate alone in the dark - and finds herself unable to contemplate any sort of future for herself. When her boyfriend guiltily apologizes and tries to reconnect, she latches on to that, even as she realizes her trust of him will never completely grow back.

Along with these plot lines, we also get alternating chapters told from the viewpoint of Amelia Anne Richardson - the nameless victim - in the days and hours leading up to her demise.

So it wouldn't be going out on a limb here to say that Amelia Anne is Dead and Gone is not a happy book. It most assuredly is not - it's a lyrically-written examination of violence against women, and the quiet bravery of women who choose to make, break, or change their plans in the midst of a chaotic and bloody world. On one side, we read of the triumph and joy that Amelia Anne feels as she discovers her true passion for acting - even as we know her story will end in a battered heap by the side of the road. On the other, we read about Becca and feel frustration as this intelligent girl with a bright future is now too terrified to think beyond the next moment of being with her deadbeat boyfriend.

The characterization in this book was excellent - even if I felt disconnected from the protagonist for much of the novel. While reading, I thought her panic and angst seemed a little overblown, but on later reflection it made sense. While she doesn't want to stick around in her fading, backwoods town, being sucker-punched by two devastating examples of the uncertainty of the future (breakup and death) would make any teenager rethink their priorities and wonder if the devil they know is better than the one they don't. That being said, her characterization hiccups somewhere near the end with a surprisingly dark and sudden plot twist.

James, Becca's boyfriend, is wonderfully depicted as well. While on paper he sounds like (and, frankly, is) kind of a loser, he's a fully-realized character and a decent guy who allowed tragedy and misfortune to derail his life. He's the living proof of what will happen to Becca if she allows her pain and fear of the unknown to keep her from escaping her hometown and following her dreams.

As well, the setting of Amelia Anne is almost like a third character. In terms of small-town depictions, it rests somewhere between Alice Hoffman familiarity and Lauren Myracle contempt. The stagnation and despair of the older residents reminded me very powerfully of Myracle's Shine (which depicted a backwater North Carolina town), but at the same time, it has its own history and social ecosystem (which call Alice Hoffman to mind).

I liked this. It's easy in fiction to depict small towns as either Perfect Bubbles of Good If Eccentric Neighbourly Values (as romance tends to do) or Festering Cesspools of Broken Dreams and Sad People (as YA often does). Really, it depends on what kind of person your character is and neither kind is necessarily bad. While, to be honest, Amelia Anne does lean more towards Broken Dreams, the author gives the setting enough layers and subtext to make it a believable setting.

As well, the writing is gorgeous, ornate, lyrical and descriptive. While this does slow down the pacing a bit, it's nevertheless lovely to read.

In short, Amelia Anne is Dead and Gone is a dark, lyrical novel that explores the bravery of challenging the unknown, even if the result is tragedy. Despite some cluttered language and a troubling surprise plot twist at the end, it's a strong example of YA literature.
A-
Posted by AnimeJune at Saturday, November 10, 2012

Labels: A- Reviews, contemporary, YA