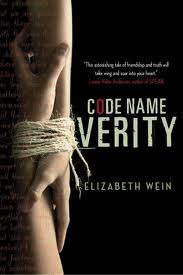 Lady Julia Lindsay MacKenzie Wallace Beaufort-Stewart: A young, pretty Special Operations Officer who is captured by the Nazis after landing in France. Under threat of torture, her hand-written confession forms the basis of the novel.

Maddie Brodatt: A young woman from Northern England and an aspiring pilot who helps ferry planes for the war effort - and people as well. She befriends Julie and winds up flying her for some of her missions - including her top-secret one to France.

Jamie Beaufort-Stewart: Julie's brother, who becomes a pilot for Special Operations even after losing most of his fingers and all of his toes after being shot down.

Anna Engel: The secretary to the Nazi interrogators who supervises Julie's confession.

Von Linden: The head Gestapo interrogator who tortures Julie into confessing even as he becomes curiously invested in the incredibly personal tales she relates.

The novel opens on the bleakest of situations: our first protagonist, captured as an Allied spy, is sitting at a table in a Gestapo prison in Nazi-occupied France. She has already had to endure horrific tortures at the hands of her Nazi interrogators, and in order to stave off further torture, has finally agreed to relinquish her secrets.

But she will be doing it in the manner of her choosing - as a written narrative, penned in her own hand.

Surprisingly, she doesn't begin with her own story, that of the foul-mouthed aristocratic genius with a gift for languages and dramatic flare - but the story of her best friend (and the novel's second protagonist) Maddie, a working-class Jewish pilot who joins the British war effort to realize her dream of flying planes. If not for the war itself, these two girls, from two radically different backgrounds, would never have met, much less become best friends.

The genius of Code Name Verity comes from the number of levels the narrative operates under. On one level, we experience the burgeoning friendship of Maddie and the protagonist (nicknamed "Queenie") amid the stress, struggle, and camaraderie of the war effort. Even as their careers take increasingly disparate paths (Queenie joins Special Operations, Maddie becomes a pilot for secret missions), they share this staunch, unbreakable human connection.

However, the narrative never lets us forget that Queenie is writing all of this under duress, and is betraying her country in doing so in order to prolong her life by a few more days. At the same time, she also knows her death is inevitable so her narrative is a last chance to have her voice heard and her existence acknowledged - even as she is giving up the names and locations of airfields, she's couching them in situations and memories that are dear to her. It's fascinating stuff.

Structurally, Code Name Verity reminded me a lot of Gone Girl in its use of perspective, point of view, and Queenie's text within a text, and how much stories change when the point of view changes - and this is where the novel's true genius lies. The story itself is interesting and full of historical detail, with some excellent characterization and development between our two heroines. However, while reading this first half of the novel, I started feeling worried because it wasn't living up to the hype. I mean, it was a solid and enjoyable story, but it wasn't Life-Changingly Amazing.

However, slightly past the halfway mark, Wein flips the narrative rug out from under us, and honestly, the surprise and the joy of discovery are so sweet and so integral to the enjoyment of this novel (as least as a first-time reader), that even I won't spoil it, and I SPOIL EVERYTHING. Suffice it to say, both parts of the novel come together to form a brilliantly constructed and beautiful picture of bravery, cowardice, suffering, joy, and friendship.

If you're a WWII buff - particularly in regards to the airplanes and their pilots - read this book.

If you love YA novels with strong, fascinatingly developed female characters - read this book (and if you don't - get the hell off my blog).

If you love clever plotting, epistolary narratives and well-laid surprises - read this book.

If you love crying in a fetal position because your heart has been torn out - um, good for you. You should also read this book. Even if you don't love that, you should read this book, because the first three points I made totally make up for this last crying-ball one. Believe me. This is an excellent novel that combines cerebral, intelligent plotting with aching emotional resonance.
A+
Posted by AnimeJune at Saturday, March 09, 2013

Labels: A Plus Reviews, historical, YA