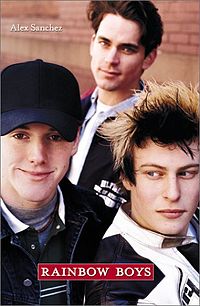 Jason: A basketball star with an abusive home life, even though he's dating a girl he can't stop thinking about guys. Does this mean he's gay? Who can he ask?

Kyle: Accepting of his sexuality but still closeted, he can't decide which is harder: coming out to his family, or helping Jason, the love of his life, decide whether he's gay or not.

Nelson: Out and proud (although still bullied), he's in love with Kyle, even though Kyle just wants to be friends. He feels like a third wheel and just wants to find a boyfriend and have hot sex. Is that so hard?

Debra: Jason's girlfriend, who is less than understanding about Jason's confused sexuality.

Jack and Jose: The two school bullies currently on probation for assaulting Nelson.


The Word: I found a hardcover edition of this book at a library sale and picked it up for one major reason and one minor, rather silly reason.

Major reason: I'd heard a lot about Rainbow Boys and how it was a ground-breaking early YA novel dealing with LGBT teens.

Minor, rather silly reason: That's a teenage Matt Bomer on the cover as Jason!

Originally published in 2001, Rainbow Boys examines the reality of being gay in high school. It begins when popular jock Jason, who's been worrying about his sexuality for a while, comes to a Rainbow Group meeting for gay teens. He chickens out, but not before meeting Kyle (a closeted academic who's been in love with Jason since forever) and Nelson (a flamboyant and openly gay teen who is, unfortunately, in love with the oblivious Kyle).

The novel is more character- and issue-driven than plot driven, but the characters are all so interesting, and the issues are discussed with such humour and honesty, that Rainbow Boys never became boring or  preachy. Jason has to deal with the fact that he might be gay, but who can he ask or talk to about his feelings without everyone finding out? It certainly doesn't help that his father is an alcoholic and homophobic abuser.

Kyle, meanwhile, has accepted the fact that he's gay but has to deal with coming out to his parents. How will his parents react - especially his father, who is continually ragging on him to be more masculine and take up sports, and disapproves of his friendship with the openly gay and effeminate Nelson? As well, Kyle has an enormous crush on Jason and despite wanting to help him with his sexuality, doesn't want to be seen as coming on to him or taking advantage.

Nelson is the only openly gay of the three characters - and has garnered the nickname "Nelly" as a result. I appreciated that Sanchez doesn't make him an object of pity, nor does he make his sexuality the be-all and end-all of his character. Nelson suffers from homophobic bullying, true, but he also nurses an unrequited crush on his BFF Kyle, worries about his body image (resulting in frequent binge eating), and struggles with his feelings for his absentee father.

This is especially odd since the novel does have sex scenes (two of which involve a character giving or receiving oral sex), that manage to be respectful and accurate without being graphic. It seemed off that a novel willing to explore characters having gay sex (including irresponsible, unprotected sex) seemed unwilling to depict a character doing more than kissing his hand and falling asleep after reading an issue of Honcho magazine.

When it comes down to it, though, Rainbow Boys is a sweet, intelligent, and engaging novel about gay teens that still holds up.
B+
Posted by AnimeJune at Friday, March 29, 2013

Labels: B Plus Reviews, LGBT, YA