"Rosemary and Rue," by Seanan McGuire 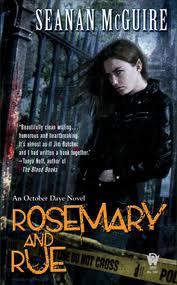 The Protagonist: October "Toby" Daye. A private eye and a Knight in the service of Duke Sylvester of Shadowed Hills in a world where the human and faerie realms intersect. She's trying to rescue his kidnapped wife and daughter when she is captured and turned into a goldfish.
Her Angst: Returned to human form after fourteen years, she lives a miserable, despairing existence separated from the faerie friends she shuns and the human fiancé and daughter who reject her.

Devin: A former lover who works as a sexually exploitative Fagin to a house of changeling runaways. Toby inexplicably still finds him attractive.

Tybalt: A Cait Sidhe - a powerful faerie who is the King of Cats. He of course "hates" Toby, which means they will be hooking up soon in a couple of books. Take my advice and think of him as played by Matthew Goode.

Connor: A selkie who was Toby's first fumbling teenage love, before he went and married the batpoop insane Rayseline. He still totally wants to hook up with Toby, though. His marriage is only political.

Sylvester: The powerful Duke of Shadowed Hills and Toby's liege. Genuinely cares for Toby, even after she rejects the faerie world.

Luna: Sylvester's awesome wife, who still loves and adores Toby like a daughter despite how Toby failed to rescue her and Rayseline.

Rayseline: Sylvester and Luna's daughter who has been rendered extremely unpleasant and also Batpoop Insane by her kidnapping fourteen years ago. Is married to Connor.


The Word: This review is probably going to be a little unfair.

Why? Because ultimately, I don't like Urban Fantasy. There, I've said it. I've read a few urban fantasy titles over the years, mostly for my work with The Green Man Review, but I never really found myself connecting with any one title. In fact, the only series I remember reading more than one book of was Kelly Armstrong's Women of the Underworld series - and that may have been because I got the first six books for free because I worked for Chapters at the time.

Now, at first I simply thought that I just needed to find the right author, the one with the perfect writing style to suck me in.

But the fact of the matter is - the genre is not my cup of tea. Not that it's a bad genre, just that the tropes common to the genre are ones that simply do not connect with me. I find the Smart-Alecky Loner Heroines who are always popping cutesy one-liners boring and interchangeable. I prefer emotional stories with gorgeous language over action-heavy stories with minimalist language. I don't like thrillers or romantic suspense either - for similar reasons.

And I honestly get annoyed with and exhausted by stories where the heroine is constantly getting hurt and accumulating layers upon layers of injuries until they're one tumble away from a full-body cast by the climax of the book - and they're miraculously fine by the next book because MAGIC.

So - Rosemary and Rue. It came so highly recommended by a lot of respected sources, but I felt the same way reading as I have every other Urban Fantasy I've tried. Bored. Annoyed. Uninvested.

October "Toby" Daye is a changeling (half faerie, half human) private eye who has an adorable daughter and a loving fiancé and is just TWO DAYS AWAY FROM RETIREMENT so of course she's caught by the two evil faeries she's been tailing and is turned into a goldfish (for reals).

Fourteen years later, the spell dissolves and she returns to a world where her life, as she's known it, is over. Her fiancé and (now grown) daughter believe she ran out on them and want nothing to do with her. She has no identity and no way to hold down a mortal job. Hurt and despairing, she turns her back on the faerie world and her friends and lieges within it, refusing to deal with the community that ruined her life.

That is, until an old faerie friend of hers, Evening Winterrose, is brutally murdered - but not before leaving Toby a voicemail. Listening to it puts a curse on Toby that forces her to hunt down and discover Evening's killers - with magically fatal consequences if she doesn't comply.

Props to Seanan McGuire - the worldbuilding for Rosemary and Rue is amazing. I loved the idea of faeries living in the real world and having their own fiefdoms and queendoms and territory wars. The idea of Toby having a liege to report to, and authorities and rituals to kowtow to while doing her job was interesting.

However, the story itself and the characters within it are less interesting. Toby is rather frighteningly obtuse for a private eye - it takes her the entire book to realize the old flame who pimped and continues to pimp teenage runaways is evil. Shocker, right? And of course we have a bunch of Bad Boy Love interests who leave little to no impact - the Cat King dude is my favourite but we don't see a lot of him, the Seal Boy is a married chump, and as for Devin - oh, right. HE'S A FUCKING PIMP OF TEENAGE RUNAWAYS. And Toby is TOTALLY FINE with that.

There were good elements - again, the worldbuilding was interesting and I liked some of the secondary characters, but the basic elements of Urban Fantasy were a huge turn off.

If you're like me and don't care for Urban Fantasy - Rosemary and Rue is not going to change your mind. If you do like Urban Fantasy, you may wish to read another person's reviews and get a second opinion from a reader who appreciates the genre more than I do.
C
Posted by AnimeJune at Friday, March 29, 2013