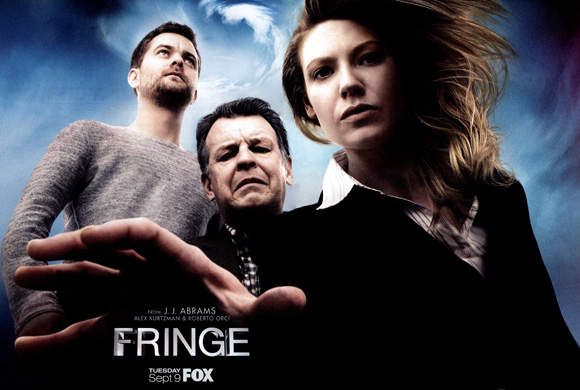 The Fringe Buddies get another case when a teenage boy, Greg Wiles, is found dead in front of his computer, his literally-liquified brain in a puddle around his head. He apparently downloaded a huge file on his computer before he died, but the process fried his computer's hard drive.

Pretty soon, another guy's found in a puddle of his own cerebral cortex - a car salesman named Anton. He also downloaded a huge file, and his computer is also too damaged for Astrid to pull too much relevant details off it. Agent Rapist steps in and starts bitching about how this should be a CDC matter and it's a waste of the Fringe Division's resources, but no one takes him seriously because he's an asshole rapist. And also because Walter discovers the virus produces sounds and images that stimulate the brain into electrocuting and melting itself.

Peter calls up one of his Shady Underworld Contacts to see if he can crack the mystery of the Brain-Melting download, and who's sending it. His Shady Underworld Contact can't detect where the virus is coming from, but he can see who's downloading it - someone at Olivia's address, where Olivia's sister Rachel and her 5-year-old daughter Ella have been staying since Rachel's divorce.

Olivia races home to find her niece Ella staring transfixed at Olivia's computer screen - fortunately, the virus-sender (who's watching through the laptop camera) disables his virus before it can do any damage. He just wanted to send a message. Apparently, he's not so forgiving to Mark Rosenthal, whose brain milkshake brings his screaming wife to the yard. Fortunately, the Fringe Buddies finally find a connection between all the victims - they all pissed off (or were related to someone who pissed off) a recently-laid off computer programmer named Brian Dempsey (played by Detective Bellefleur from True Blood).

Meanwhile, Jessica Warren, the mother of the lab assistant whose accidental death sent Walter to St. Claire's seventeen years ago, has been trying to get in contact with Walter, but all her advances have been headed off by Peter. Peter can't imagine Jessica has anything good to say to the man responsible for her daughter's death, and he's worried that Walter's too mentally fragile to handle it.

The Fringe Buddies can't find Brian Dempsey, so they bring in his teenage son Luke instead. Agent Rapist wants to put the screws to him, but Olivia violates his orders and lets Luke go - hoping he'll inadvertently lead them to where his father is hiding. He does. Luke's horrified when he discovers what his father's done, and his disgust - combined with Olivia's sudden appearance - provoke a despondent Brian into killing himself.

Peter, seeing how far Luke was willing to go to protect his father, despite his father's obvious mistakes, finally allows Jessica and Walter to meet. Instead of screaming at him, Jessica only wanted to find out more about her daughter through Walter, and it's a bittersweet but mostly positive encounter.

Finally, Agent Rapist gets all up in Broyles' grill about Olivia's defiance of his orders, and Broyles is having NONE OF IT. Bromance over!

Best Death Scene: Greg Wiles, I suppose? We don't actually see many of the deaths. They're all off screen, and we only get to the see the gooey aftermath.