"Written On Your Skin," by Meredith Duran (Something, Date) 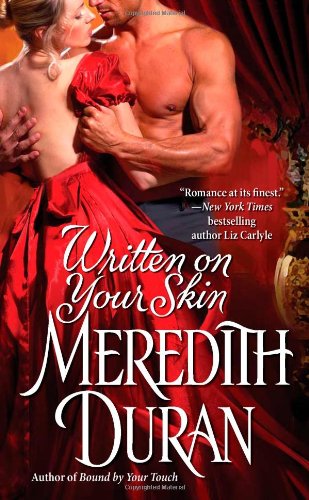 The Chick: Mina Masters. A beautiful young entrepreneur who makes a living convincing rich young men that she's a harmless blond ditz - until her mother goes missing and the British government thinks she's in on it.
The Rub: She's unable to fully fool Phineas Granville, the man who's looking for her mother, so she might actually have to be honest with him. But can she trust him?
Dream Casting: Romola Garai.

The Dude: Phineas Granville, Earl of Ashmore. Recently retired from the spy service, his despised former superior wants him back to help pry answers from a very reluctant witness - Mina Masters.
The Rub: He met her before, in Hong Kong, and he nearly lost his head over her. Can he trust himself not to lose control over her again?
Dream Casting: Benedict Cumberbatch.

Mina: That's good, because I'm totally not a canny seductress who's only pretending to be an idiot!

Mina: Hey, I'm being unfairly imprisoned by your government! You owe me!

Phin: FINE. Wait, you're not stupid!

Mina: Wait, you're not evil! Let's find my mum!

Phin: But now that I love you, I can't put you in danger!

Mina: LOL NO. *uses herself as bait, catches traitor*


The Word: I haven't had a whole lot of luck with Meredith Duran. There's no doubt that she is a magnificent writer, but I just haven't been able to personally connect with her writing style.

I still had Written On Your Skin in my TBR pile, so I decided to see if third time was the charm.

Written On Your Skin happens at roughly the same time as its predecessor, Bound By Your Touch, and it involves Phin Granville, Sanbourne's Dark and Angsty and Possibly-Substance-Abusing Friend.

Four years ago, in Hong Kong, Phin was a spy for England who was trying to find proof that a devious criminal named Collins was selling weapons to Irish rebels. He collapsed after being dosed with hemlock by an unknown accomplice of Collins and rescue came from the last place he expected - Mina Masters, Collins' (supposedly) bubbleheaded stepdaughter. He recovered (barely) in time to flee, but was forced to leave Mina behind to face the consequences of her rebellion.

After the incident with Phin, Mina finally managed to extricate her mother and herself from Collins' clutches and build a life for them in New York. Four years later, her mother goes missing during a visit to England, right around the time Collins escapes from prison. When Mina goes to the authorities she winds up imprisoned "for her own protection" by England's spymaster, Ridland, who believes she secretly knows where Collins is hiding.

Desperate to escape and find her mother on her own, Mina decides to contact Phin and call in the favour he owes her for saving his life. Unfortunately, Phin is now out of the spy game and immediately suspects Mina of being one of Ridland's pawns in an attempt to hook him back into the shaken and stirred lifestyle.

Like Duran's previous novels, the writing style is lush, thoughtful, and thorough. It makes for a fairly leisurely pace as Duran picks apart our protagonists layer by layer through reams of emotionally byzantine dialogue. To Duran's credit, neither character turned out as expected. Based on Phin's brief appearance in Bound By Your Touch, I was expecting Phin to be the dark, messy addict who's hanging onto sobriety by the wispiest of threads. Instead, he's a man so addicted to and ashamed of the absolute control he requires in his life that he occasionally resorts to opium to loosen his iron hold on his own choices - but not to the point of addiction. He's ashamed of the deeds he committed while spying for the crown, ashamed of the cartography skills that landed him his spy gig in the first place, and too ashamed to maintain contact with his dead mentor's innocent wife and daughter.

Mina is the opposite. She refuses to be caged or cowed ever again, and she'll leap at any opportunity, no matter how risky, to protect herself and her mother from the vengeful men of the world. She's a very impulsive heroine, but Duran also makes her informed and experienced so that she never comes across as a TSTL idiot who needs to be saved all the time. However, she is quite a handful before she comes to trust that Phin's a Good Egg.

On the positive front, I connected far more with these characters than in previous Duran books. I loved their witty, evasive dialogues, the intimate description. These are meticulously crafted characters, brought out piece by piece by piece, and my main pleasure from this novel was in learning more about them, and how they fight to negotiate between Phin's controlling nature and Mina's impulsive spirit.

However, on the negative front, I couldn't connect at all with the story itself. Despite the fact that it deals with spies and traitors and bombs and poison, the pacing is ridiculously slow and drawn out. I like character development and dialogue, but there needs to be some external action as well and I found myself frequently bored throughout this book.

Honestly, while I connected much more with the characters in this novel, Written On Your Skin is still very much a mixed bag.
B
Posted by AnimeJune at Sunday, August 25, 2013