"Just Like Fate," by Cat Patrick and Suzanne Young (SimonTEEN, 2013) 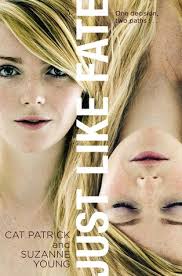 The Protagonist: Caroline, a 17-year-old girl who's lived with her grandmother for five years, ever since her parents' vicious divorce.
Her Angst: When her grandmother has a stroke, Caroline has to make a choice - should she stay until the bitter end, or shake it off and spend a few hours unwinding for herself?

Simone: Caroline's BFF, who asks Caroline to go to a party with her three days after her grandmother's stroke. Depending on whether Caroline goes or stays, their relationship encounters a few hurdles.

Teddy: Caroline's understanding older brother, who lives at the nearby Clinton College dorms.

Joel: Caroline's longtime crush - in the "Stay" universe, he comforts her in her grief and the two start a relationship.

Chris: A cute college boy Caroline meets at a party in the "Go" universe on the night her Gram dies.


The Word: Just Like Fate (which was a lovely gift from the SimonTEEN Blogger Party at BEA) is the perfect example of a fantastic premise utterly wasted.

17-year-old Caroline is horrified when her grandmother, with whom she's been living for the last five years, has a stroke. Her body already weakened by a recent bout with cancer, Gram isn't long for this world. After spending three days by her bedside with her various family members, Caroline gets a call from her best friend Simone, imploring her to take some time for herself to relax at a party. Does Caroline stay with her Gram, or does she go out to try and unwind?

The novel hints at some interesting consequences - in the "Stay" universe, Caroline achieves a shaky reconciliation with her estranged sister Natalie and the two renew their relationship. In the "Go" universe, a guilt-ridden Caroline abandons her family and nearly ruins her friendship with Simone thanks to misplaced resentment.

And yet, the novel never goes further with the idea of these two paths diverging in a wood. There really are no real, solid consequences to Caroline's actions that separate the "Stay" from the "Go" universes. It's a cheat, really - Caroline never really loses or gains anything significant by her decision to go or stay. She miraculously makes peace with every character in both universes by novel's end and even winds up with the same love interest in the 11th hour, which seemed like a huge cop-out.

The premise seems to be mainly an attempt to shoehorn in two YA romances as Caroline courts a different boy in each universe - the hipster longtime-crush Joel in "Stay," and goofy college student Chris in "Go" - while ultimately winding up with her Twu Wuv in both versions.

It doesn't help that our main character is a mopey, selfish, and thoroughly unsympathetic drip. Yes, in both universes she's grieving the loss of someone very important to her, and teenagers are not known for their emotional intelligence. However, I cringed at her utter self-absorption and how she acts like she's the only one grieving Gram's death. She holds everyone around her to an unfair standard but demands special treatment because her pain is more important.

She's particularly egregious in the "Go" universe, in which she abandons her mother (whose own mother just died) to live with a father she's never spoken one word to in five years, and proceeds to ignore all her calls for months. And none of these decisions come with any permanent consequences, which only contributed to the novel's unrealistic tone. You can't just treat someone like that and have your relationship proceed as if nothing's happened.

Caroline is also pretty passive and doesn't solve a lot of her internal conflicts by herself because the narrative conveniently drops some easy solution into her lap at every opportunity. So instead, most of the conflicts come from some Random Stereotypical Cheerleader Villains (for reals) and a Big Misunderstanding that's only a misunderstanding because the heroine is a complete moron.

The premise promised an interesting story about how much a single decision can alter your life and your relationships with the people around you. Instead this novel's ultimate message seems to be that your actions don't matter because life will just magically fix everything for you. In a world where every decision counts, I recommend the universe where You Don't Read This Book.
C
Posted by AnimeJune at Monday, August 26, 2013