December In New York: Day One

I sort of have a love-hate relationship with New York City.

My first trip to New York (for RWA Nationals 2011) was everything a prairie kid with a love of 1940s musicals and cop shows could ask for. My first ever Broadway show: Book of Mormon with the original cast. I wandered goggle-eyed through the Metropolitan Museum of Art, fed a pretzel to the world-weariest pigeons I'd ever seen, tramped through Central Park without a map.

The second time I went, for Book Expo in 2012, was a carriage-horse of a different colour. I had my first brush with serious anxiety. Suddenly, I felt alone, and scared, and New York morphed into this grey, claustrophobic labyrinth of strangers, garbage-strewn alleyways and bedbug-infested corners.

I figured that was a fluke, but when I returned in 2013, it escalated. I had a full-on panic attack on the train ride from Newark to Manhattan. My worry about my food allergy evolved into a massive phobia that restricted my diet to bananas and yogurt. I felt depressed despite being surrounded by hundreds of women with the same interests as me.

I came home from that last trip at midnight and stayed up three hours more to wash my laundry, vacuum and disinfect my luggage, and painstakingly inspect everything I brought home with me for parasites, bugs, or dirt of any kind. And it took a full week after that before I could eat comfortably and go to sleep without inspecting my sheets. By the end of that trip, I was convinced you couldn't get me to return to New York City if you put a gun to my head.

So why the blog post? Well, it's been exactly a year since the time I got over that fear and returned to the Big Apple for one of the most memorable Christmas seasons of my life.

After the last two disastrous trips, what could possibly tempt me back to that squalid, insect-infested island? A hotel. A very special hotel.

The Library Hotel. A glorious, boutique hotel blocks away from the flagship branch of the New York Public Library, it boasted plush reading areas, exceptional service, literary-themed cocktails, rooms based on library categories, books in every room - and one hell of a high price tag. And in April 2013, I won a two-night stay there thanks to their haiku contest on Twitter.

And even then, I almost didn't take them up on their once-in-a-lifetime offer, until my dearest mum decided she would come with me, as part of a combo Christmas-birthday celebration, to celebrate December in New York with me and keep my anxiety at bay.

Mum and I few out on a Thursday. We arrived in Newark and grabbed a cab just in time to hit rush hour traffic in the Holland Tunnel, which chewed us up and spat us out close to the Garment District. Mum marvelled over the small shops dedicated to only zippers, spandex or tassels (a whole shop of tassels!), while we passed a deli with a sign that read, "We cure our own brisket ... and our chicken soup cures everything else!" 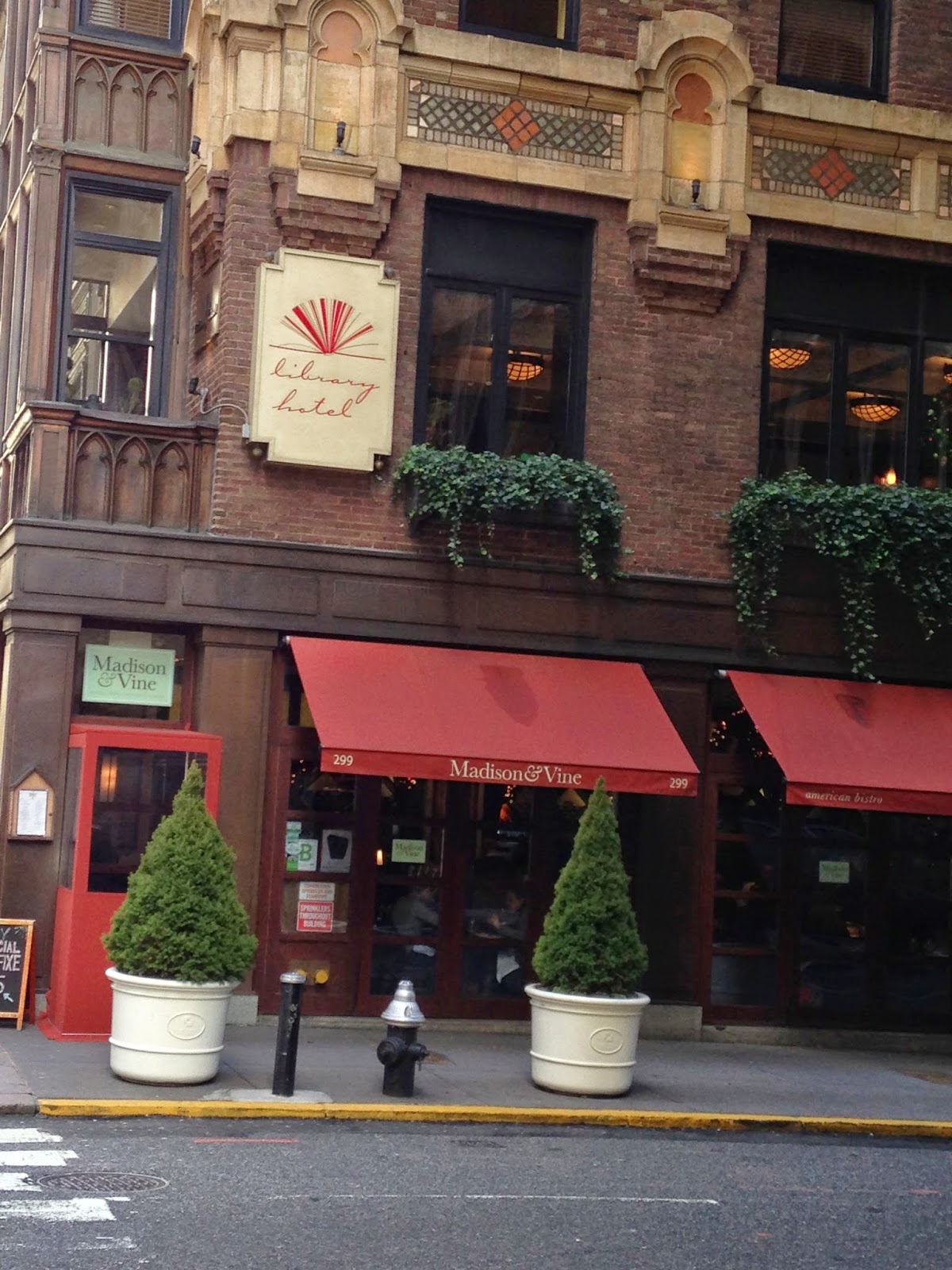 When we reached The Library Hotel, we discovered it wasn't only full of books - it was shaped like one. Like an enormous hardcover volume of brick, it has a wide front and an extremely narrow side. In all else, the Library Hotel exceeded expectations - but not in actual physical size. We manoeuvred our bags through the tiny entrance and to the narrow front desk and up the cramped elevator to our, uh, compact rooms (my room was Poetry because I won the Poetry contest, and my mother's was Dramatic Literature).

However, despite the lovely hotel, my anxiety was a hardy beast, undeterred by rapturous TripAdvisor reviews and designer soaps. It was determined to reach out its long, cold fingers and find every little fissure of doubt in my "perfect" trip and widen them into flaws impossible to ignore. The threat of bedbugs. The possibility of allergies. The incredible expense, and the pressure to enjoy everything, absolutely, all the time or else all that money would be wasted.

It followed me out into the street as Mum and I followed the stream of people exploring the Christmas lights on Madison and Fifth, the enormous tree at Rockefeller Plaza. We had to hold hands and walk single file through all the crowds. The Cartier building was done up like an enormous gift with glowing red ribbon and shining panthers climbing up and down the building. Harry Winston was covered with glittering diamonds (Mum actually knocked on the door to inquire about the enormous emerald pendant in the window - "10 million dollars," the attendant replied). Another building had an entire Advent calendar projected onto its face, and yet another jewellery store was encircled by a giant, gem-encrusted serpent. 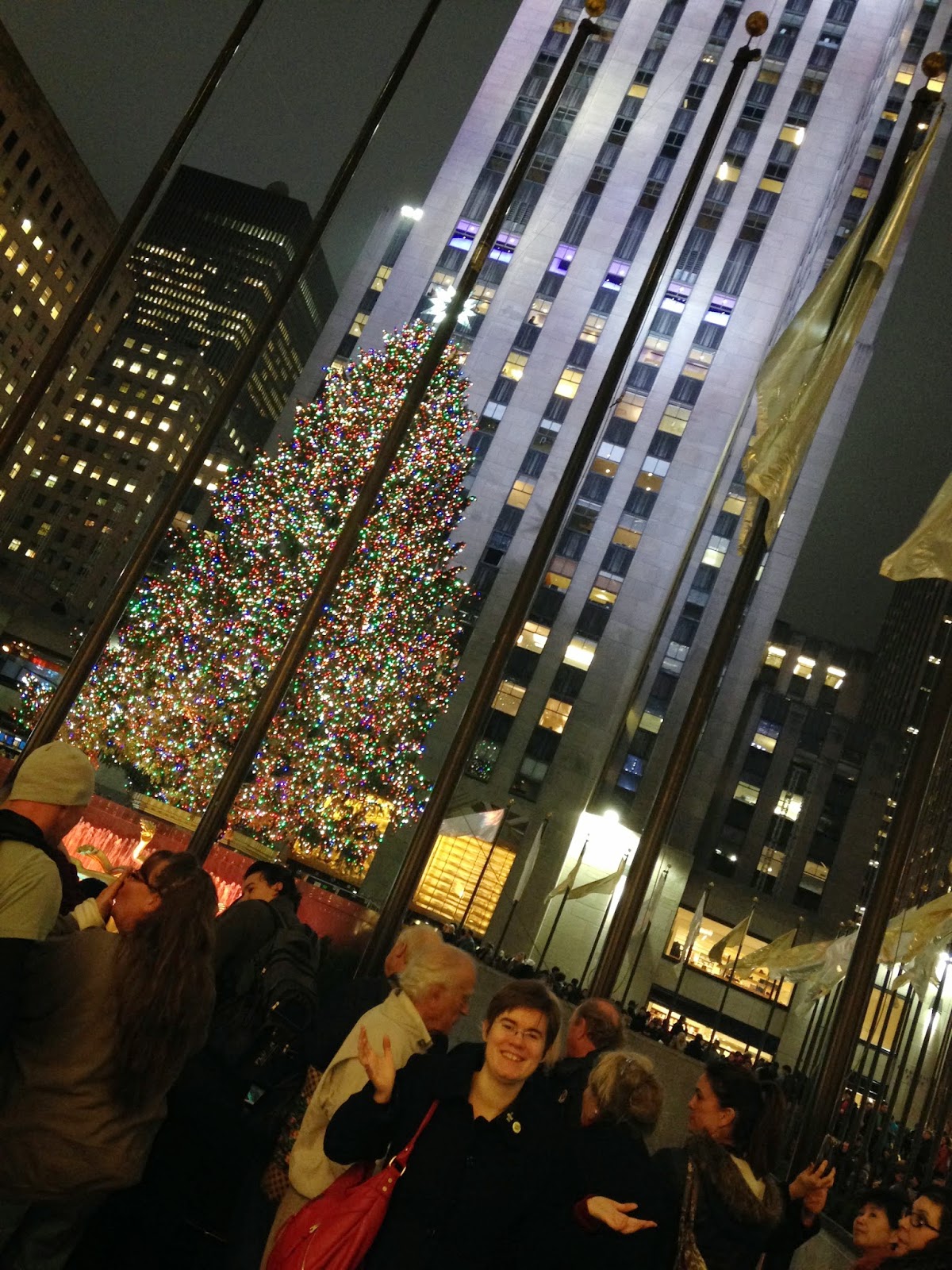 And yet, that first night was a bit of a nightmare. Depression is a bit like a snowball rolling downhill - it accumulates. First I felt miserable, than I felt miserable because I was miserable because this was Christmas! In New York! And it had cost so much money! We finally paused to sit down after exploring FAO Schwartz - and I had to tell Mum the truth. I cried. I remember feeling so ashamed. Mum and spent so much time and money and effort to get me here so I could have my dream trip and I was so ungrateful and broken and selfish because I couldn't enjoy it.

But actually talking about it, about my fear and sadness, felt like loosening a pressure valve. Mum admitted she was scared, too, and that she felt the same way on her first days in Paris and Rome. New York City at Christmastime is far different from our hometown in Canada. We were still transitioning. We were still adjusting. We would feel better tomorrow. Sometimes, when you're feeling scared or pressured or sad, it can help just to be reminded that the feeling is temporary and will go away. And one should never allow oneself to feel pressured to enjoy anything.

I found the first of many Christmas presents that night: Mum and I walked into a store called the Art of Shaving, where I found a luxurious badger hair shaving brush and high-quality shaving soap for my dad (one year later, he's still addicted to the stuff, which he has to buy through Sephora now since Art of Shaving isn't in Canada yet).
Posted by AnimeJune at Wednesday, December 10, 2014