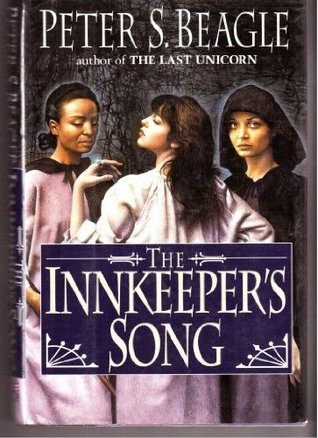 The Word: The Innkeeper's Song was one of those hidden literary gems that I picked up by chance at a remainders bookstore and immediately fell into. Written by the same dude who wrote the novel (and screenplay!) for The Last Unicorn, it was one of those transformatively good novels I was a little hesitant to read again, for fear that lightning wouldn't strike twice.

The novel centres around three strange, fascinating women who are drawn to the same inn. Lal is a storytelling warrior tracking the distress call of her former mentor, Lukassa is a drowned girl who was resurrected from the river by mysterious magic, and Nyateneri is a wanderer fleeing the murderous members of her former convent.

After arriving at the inn, the three women discover they're connected - Lal and Nyateneri were taught by the same old wizard at different points and Lukassa was revived by one of his spells. This same wizard, it turns out, is in rather dire straits and the women will have to band together and combine their unusual skills to rescue him.

The main plot (save The Wizard) is kind of weird and thin and not all that important in the grand scheme of things. It's a large, easily identifiable story that binds together the host of smaller stories that make up the bulk of the novel. Smaller stories involving the three women and their respective cultures and pasts, their ties to The Wizard, the employees of the inn (such as put-upon stableboy Rosseth), outsiders like Lukassa's fiancé and Nyateneri's shapeshifting fox companion, and their interactions with others.

The Innkeeper's Song is a surprisingly dense book, packed with lush description and tantalizing hints of various exotic worlds lying just at the margins of the main environment. Sometimes - at least during this particular reread - it felt a little too dense, but it could also have just been my frame of mind at the time that made the reading experience slower than I wanted. That part of me wanted more of a meat-and-potatoes, get-to-the-point story, instead of the pleasant, descriptive ramble The Innkeeper's Song is.

It remains a weird, subtle, meandering and unique book about three awesome magical ladies (two of whom are POCs ... one of whom is not as much of a lady as the others) and a truly bizarre/hilarious scene involving a fourway menage where not everyone remains the same gender they were when they started.

If you're looking for a diverse, original stand-alone fantasy, you can't do much better than The Innkeeper's Song.
A
Posted by AnimeJune at Tuesday, December 23, 2014