Friday morning, we ate a relaxed breakfast in the Library Hotel's comfortable Reading/Breakfast room before going out to explore. The weather was cool, but only on par with a brisk Canadian spring, so we had no issue walking everywhere. 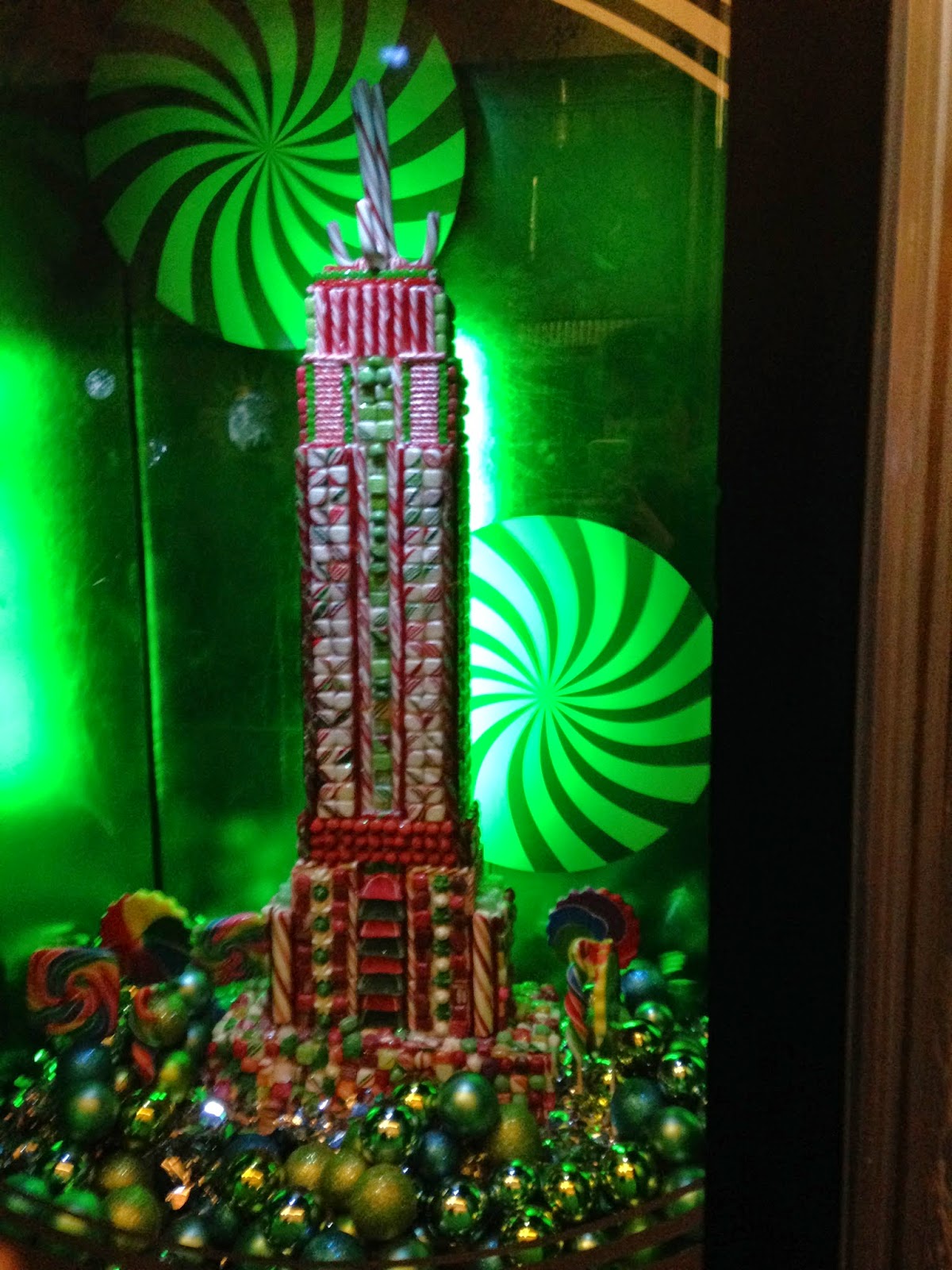 Opening my mouth the day before had released me from my misery - I felt anxiety and twinges of sadness and panic here and there, but I allowed myself to experience it and it passed through me instead of building up, so I was able to enjoy myself infinitely more. Mum and I spent the morning poring over the elaborately-coiffed dolls in the Lord and Taylor windows, posing next to the New York Library Lions, comparing the candy version of the Empire State Building to the real thing, and goggling at the absurdly high-tech window display at Macy's (which involved holograms, animatronics, green screens, and sharp metal Christmas trees that transformed into stars).

The first time I ever visited New York, I succumbed to the "I'm in a movie" feeling, being surrounded by so many recognizable landmarks and buildings - so being in New York in December felt like being in one of those cheesy, wonderful Christmas films. All of a sudden, I was excited again by bright lights and toys, enthusiastic sidewalk Santas, and smiling doormen in suits who opened every door. 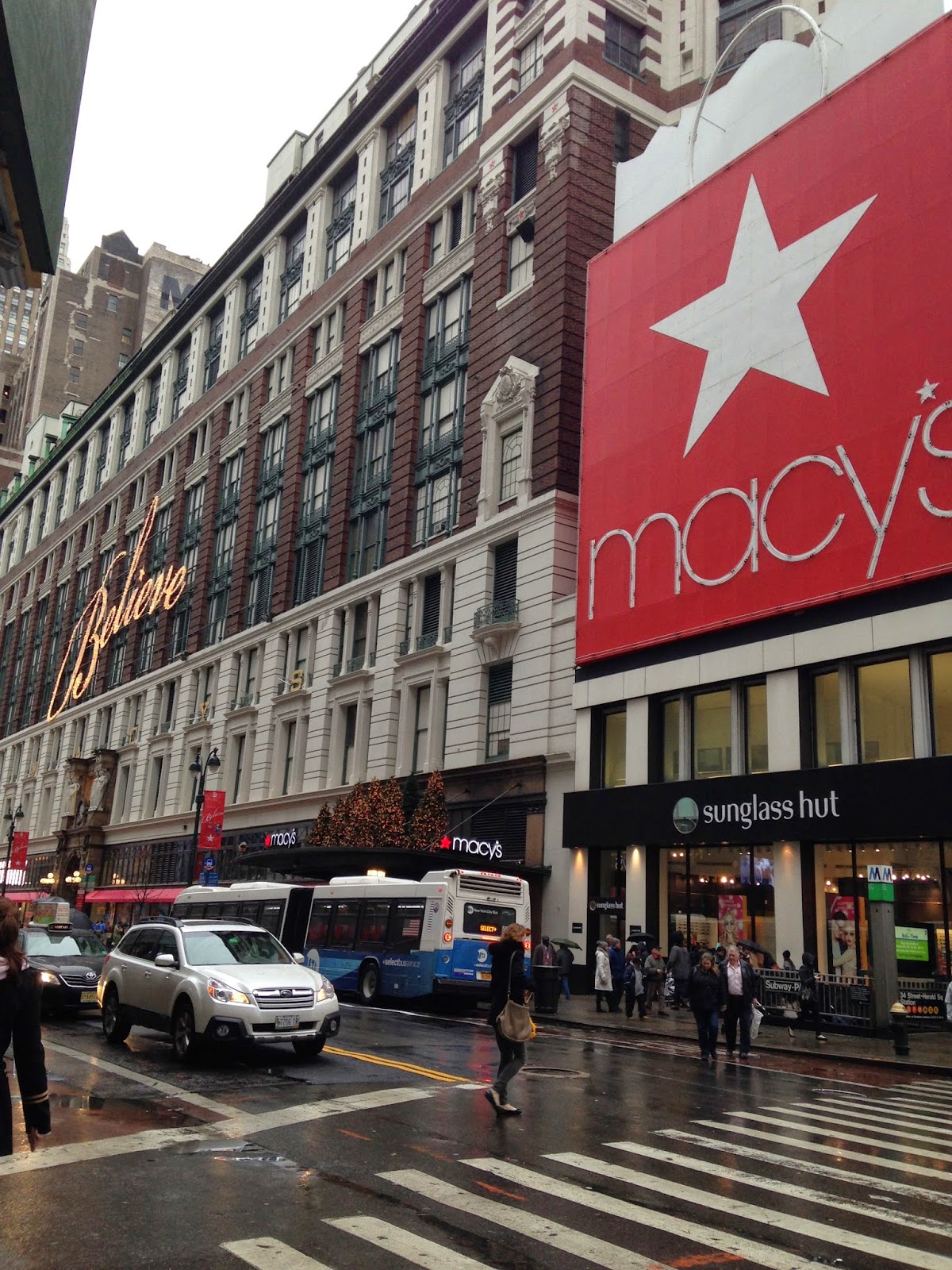 Macy's was pretty shameless in its Christmasness, indoors and out, but when you're the Macy's on the 34th street (where that "Miracle" occurred), you have a reputation to protect. We rode old-fashioned, clacking wooden escalators from floor to floor. We didn't get into Santaland - the line was (unsurprisingly) insanely long - but the glimpses we saw convinced us that Christmas at Macy's was Serious Business.

After that, came the Metropolitan Museum of Art. I'd already been, so I let Mum take the lead. We walked into (and then quickly out of) an unsettling exhibition of Balthus' fixation on underage girls and cats before exploring the section of religious art - I quite enjoyed the enormous nativity scene. We avoided sculpture (Mum had just gotten back from Rome the month before, and was "completely sculptured out") so we instead shifted our focus to a fascinating exhibition on musical instruments. We walked through the evolution of the flute, the guitar, and the harp - we even saw a "cross harp" which is an X-shaped instrument composed of two slanted harps. God only knows how many hands you'd need to play it.

As much as we loved the artwork and the instruments - we loooooved the gift shop. There is nothing like the Met gift shop. We both bought beautiful gifts and souvenirs, and I managed the rather impressive feat of buying my mother a massive art book on instruments with her own discount card, while she stood ten feet away, without her finding out.

After that, we broke for lunch at the Museum's cafe. And wow. The museum cafes in NYC do not mess around - none of this reheated soup and sandwich cafeteria nonsense they have back home. My chicken soup had quail eggs in it, with Yukon gold potato chips, and Mum discovered the best-tasting espresso outside of Italy itself. 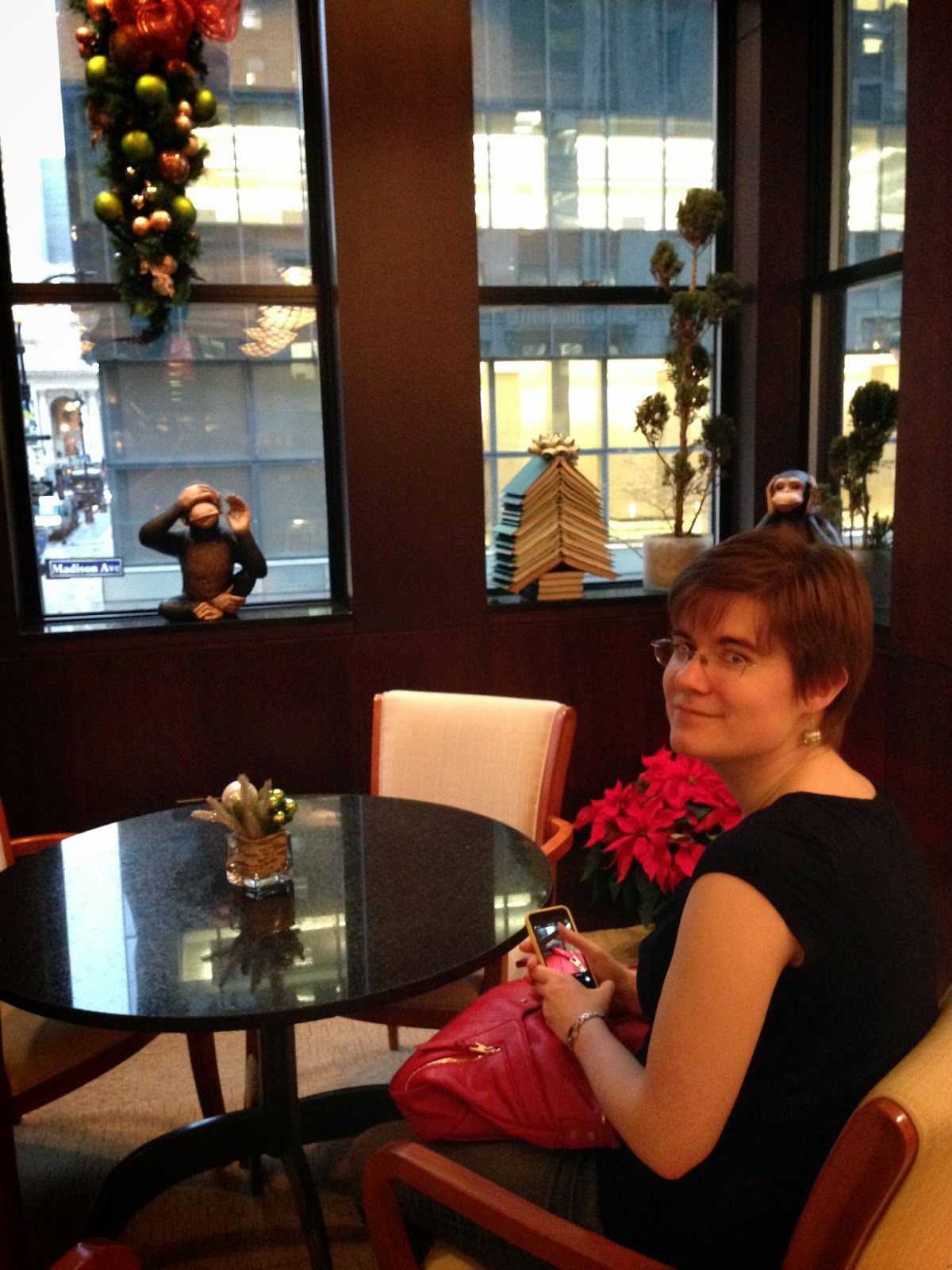 After that, we returned to the hotel to relax. And I mean relax. I mentioned the Library Hotel's narrow corridors and hatbox-sized rooms, but not how the hotel compensates for that with their plush, impeccably comfortable Reading Room. Cozy furniture, soft music, free coffee and snacks (with Prosecco and cheese after 5pm!), it was the perfect place to curl up and read after a day of adventuring. It had none of the sanitized, transitory air of a hotel lobby. New York City is amazing, but it's intense and often overwhelming, and the Reading Room was an oasis of calm where one could pass time without feeling like they were wasting it. On those other, horrible New York trips, where I spent hours glumly hiding out alone in my hotel room, I really could have used a Reading Room like the Library Hotel's.

We had supper at the hotel's restaurant, Madison and Vine, which was somewhat less than appetizing (Mum ordered spinach on the side, and was served enough spinach to give Popeye a stroke), and then dashed out into the rain to the Shubert Theatre to see Matilda the musical. While it was snowing in Canada, it was only raining here, but enough to leave us quite washed up and bedraggled by the time we squished into our theatre seats.

Worse, we wound up sitting in front of a tribe of unmannered hillbilly rubes who talked during the entire show. And I mean the entire show, not just a wee bit too long after the curtain rose. Their uncultured patriarch performed quite a soliloquy about spilling his frozen margarita down the front of his pants and "freezing his boy parts" (direct quote). The only possible explanation is that the parents assumed Matilda was a "children's show," and only worthy of their children's attention, despite the fact that they must have paid upwards of $500 to take them all out to see it. 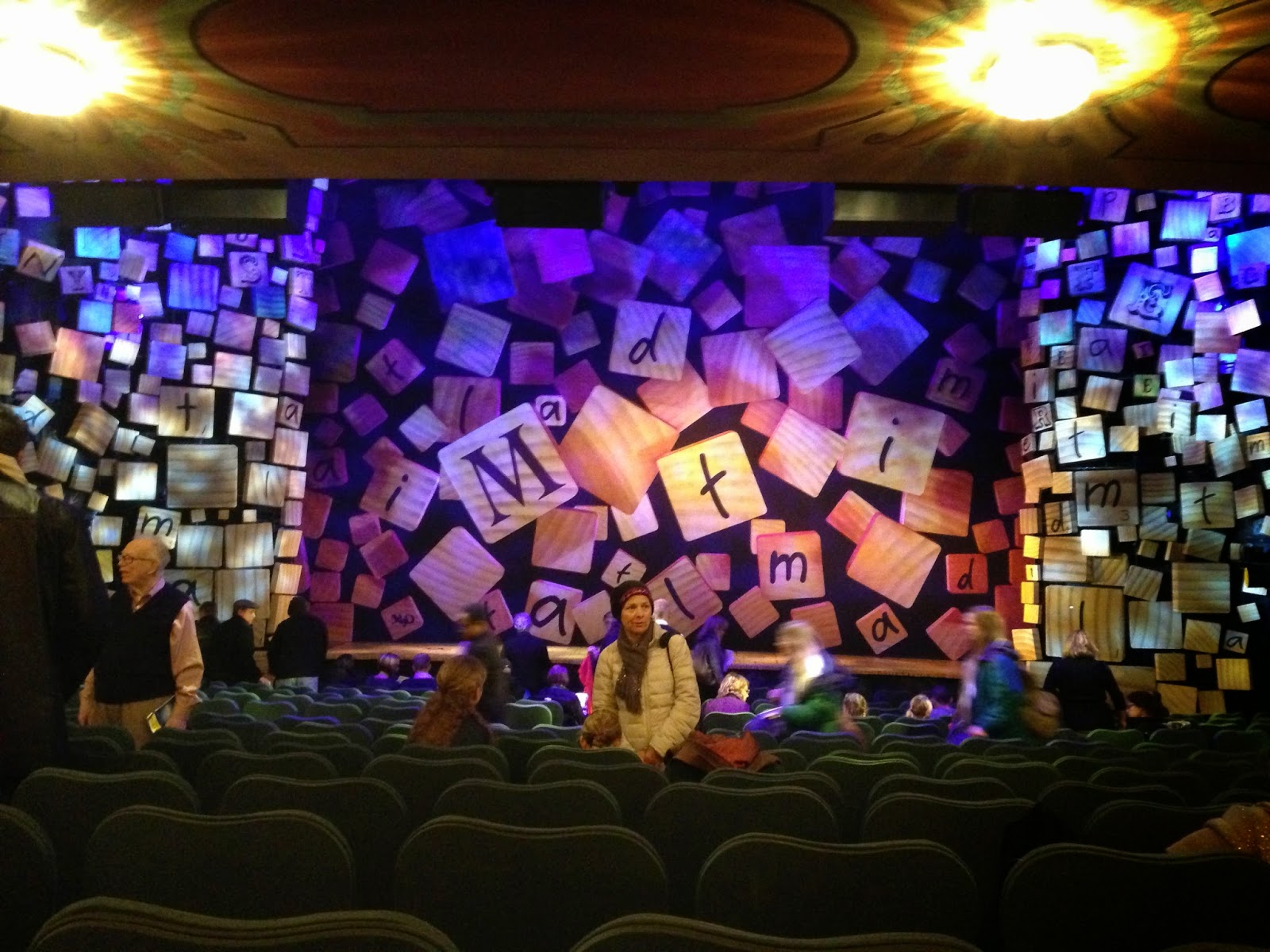 And they would have completely ruined the evening for me and my Mum, if Matilda had not been absolutely amazing - the clever set design, the brain-twisting lyrics, the stellar performances quite drowned out (most of) the complaints about Mr. Hillbilly's genital hypothermia. Both Mum and I were blown away by the energy and the music and the magic. I was so happy - my first Broadway experience (Book of Mormon with Josh Gad and Andrew Rannels) was everything I could ask for and I wanted it to be the same for Mum, and it was!

The musical version is quite a darker beast than the American film adaptation. Murder, child abuse, telekinesis - it's the same events played out in the book and suggested in the film but put under a different focus. While still child-friendly, it has an edge to it I really enjoyed. The actor who played Miss Trunchbull (a drag role), was absolutely phenomenal - from celebrating her long-ago hammer throwing victory with a triumphant ribbon dance to tossing a student out the window by her braids (one of the most delightful instances of stagecraft I've ever witnessed), Miss Trunchbull was a formidable villain.

And the soundtrack? I've already listened to it from start to finish about a hundred times since. And here ended the second day of our NYC trip.
Posted by AnimeJune at Saturday, December 13, 2014