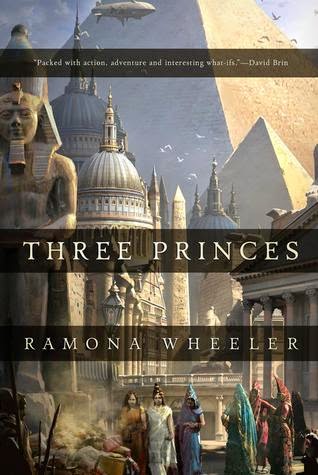 The Protagonists: Lord Scott Oken and Professor-Prince Mikel Mabruke. Two princes from different nations under the mighty Egyptian Empire, they are also secret agents for the Pharaoh.
The Rub: When reports reach Egypt that the Nation of the Four Corners (the Incans) are working on rocket technology, Mikel and Scott are sent to see how viable this project is.

The Word: Three Princes is the most beautifully-written utter waste of time you'll ever read.

The concept is original and intriguing - the novel's set in an alternate history (circa 1877 or thereabouts) where the Egyptian Empire never ended, but instead grew and thrived to become the dominant world power thanks to the successful marriage of Cleopatra and Julius Caesar. Egypt is now a wide-spanning and mostly benevolent commonwealth, with only a few rebellious areas left (like the Osterreich empire, ruled by Victoria and Albert!) to threaten the world's safety.

The characters sound diverse and interesting - Lord Scott Oken, a minor prince from the Egyptian province of Scotland, is a spy for the Pharaoh. His mentor, Professor-Prince Mikel Mabruke (from Nubia), has retired from information-mongering - but both are called back into action by the Pharoah's wife. The Incas, it appears, are working on a scientific project to travel to the moon, and Egypt wants someone trustworthy to travel to South America and see a) if it could work or b) if it could be a threat.

What follows is a dreadfully slow, narratively hollow, but gorgeously-described imaginary travelogue as Mikel and Scott slowly and cheerfully make their meandering way from Memphis to Tawantinsuyu, by way of several decadently-appointed airships. A luxurious attention to detail is lavished upon their expensive accommodations, their entertainments, the profusion of bare-breasted South American women, and the bizarre technology of airships (cyclists and trained albatrosses are involved) - and almost none on the actual plot, conflict or character development.

Wheeler stretches out a short story's worth of plot to a 350-page novel, and doesn't waste any of the precious, precious filler (like pages of description devoted to guest room furniture lovingly carved to look like naked ladies) on developing any of the characters beyond the most basic, repetitive strokes. Lord Oken likes sex with ladies. Mikel likes making witty comments to mask his inner pain. Secondary characters pop out of nowhere and make jarringly huge and sudden decisions for no reason, and with no context or development to explain the outlandish choices they make. The novel's main antagonist, for example, is present for maybe ten pages (out of 350) and behaves like a Disney villain who's survived a meth lab explosion. There is no rhyme or reason to his behaviour - or to why anyone follows him or takes him seriously.

Neither does Wheeler sacrifice completely relevant scenes of frolicking dogs, babies and guinea pigs (for reals) to develop her own plot threads. A mention of a Queen Victoria-led conspiracy involving orchids and bizarre religious cults goes nowhere, and the vicious attack on Mikel at the beginning of the novel that can't possibly be coincidence - turns out to be mere coincidence and is never mentioned again. Um, okay.

I kept reading and waiting for the plot to pick up because Wheeler is a genuinely fantastic wordsmith - her worldbuilding and her grasp of setting and culture are astonishing and beautiful. Her evident talent and skill makes the appalling lack of a plot in this novel an even greater frustration. If you're interested in reading about two friends going on an expensive and largely uneventful exotic vacation, this is the book for you. If you actually require story, substance, conflict, or coherent drama of any sort in your fiction - you'd best look elsewhere.

Three Princes is an empty, self-indulgent non-story wrapped up in beautiful writing.
D
Posted by AnimeJune at Saturday, February 28, 2015