"Getting Rid of Bradley," by Jennifer Crusie 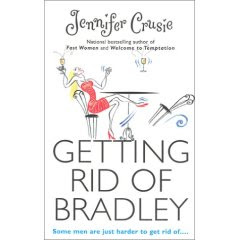 Ah, the magic of Jennifer Crusie - if there's anyone out there for me to thank for introducing me to the pleasures of romance, it's the Smart Bitches and her. According to the Bitches' website, this is one of her earlier novels, and while not as good as Bet Me, it's still pretty fun.

The Chick: Lucy Savage, a down-on-her-luck physics schoolteacher who took a risk in marrying Bradley Porter, only to have it blow up in her face when she caught him with a hot blonde, and then, when he stood her up for her own divorce. She's torn between doing the irresponsible thing now that she's a free lady, and relying on rationality since her previous lucky dip turned out to be a turd.


The Dude: Zack Warren, a rugged property crimes cop who's chasing an embezzler by the name of Bradley. For some reason, since he's pushing the deadly-middle-age of 36, he's terrified by the idea of settling down and aging, because he believes that love and mortality will eventually strip him of his instincts and lead him to a dissatisfied grave. He's eternally griping about both the old, slow badges on the force as well as the spunky, fresh-faced rookies.


The Plot: After overhearing Lucy talking about "getting rid of Bradley" in a restaurant, Zack follows her in the hopes of learning something about his perp, who's vanished into thin air. He grabs her, she (judging him to be a mugger by his rugged, sexy, delightfully irresponsible appearance) gives him a concussion with a physics textbook, and chaos ensues when someone shoots at them.


Zack thinks Lucy's the target, is convinced she's involved with the embezzler, and decides she needs police protection until the case is solved. Lucy, on the other hand, is equally insistant that as a mild-mannered schoolteacher, no one could have any possible reason to try and kill her while a perfectly good (-looking) police officer was standing right next to her. She is both appalled, and secretly elated, when Zack determines she needs police protection of a more personal kind, if you know what I mean.


The Score: Most of Crusie's good points are here - cute animals (a dog that tells jokes!), hilarious banter, entertaining secondary characters. However, while the story was interesting, I found Lucy to be the littlest bit annoying. While not TSTL (romance-speak for Too Stupid Too Live), her reaction upon being told by a professional police officer that someone is trying to kill her consists of: 1) Convincing herself that it wasn't a gunshot, but a car backfiring, 2) Trusting her physics-teacher instincts over those of a cop, and thus disagreeing with nearly everything Zack tells her, and 3) Disobeying Zack's orders to stay in the house not once, but several times, even after she learns that doing so results in hordes of cop cars converging on her house, and even after the mysterious Bradley (or Bradleys) begin making serious attempts on her life and property.


I realize that she has absolutely no idea why anyone would want to harm her, and that the book wouldn't be nearly as entertaining (or long) if she meekly said, "Yes, officer" and curled up on her couch for three days, but after a while I kept thinking, "Girl, think!" She does learn eventually, though, and it's to Crusie's credit that she doesn't abruptly switch from defiant rational teacher to panicked damsel in distress -- she's much more willing to accept Zack's help, but she's still not going to take all his shit.


And as for Zack - I liked him, in general. He's remarkably patient with Lucy, even when she gives him a concussion (from a textbook) and hurts the bones in his feet (by slamming her front door on them) and drives him absolutely up-the-wall insane with her cuteness and her three dogs and her nice house and her insistance that he learn how to cook. I was a little put off by how often he repeated his personal mantra ("Settling down, aging, death," "loss of instincts leads to death," "love equals maturity equals settling down which equals death," etc. etc.) because he flushes it down the tube pretty quickly once he becomes acquainted with Lucy. I felt he was being a bit of a drama queen with it, and was pleased when he finally shuts up about it.


Ultimately, the book's a fun, quick read - the mystery goes in surprising directions, and the biggest surprise of all is that Lucy's hubby Bradley doesn't turn out to be the villain he's been made out to be. Of course, he's still completely wrong for her. The novel does an excellent job through hints and subtle suggestions that Bradley was still a damaging presence to Lucy's personality and spirit, even if he wasn't explicitly abusive. And of course, the book's dashing finale cements Lucy and Zack's made-for-each-other status quite competently. While not my favourite, Getting Rid of Bradley is still a fluffy, light-hearted piece of entertainment. 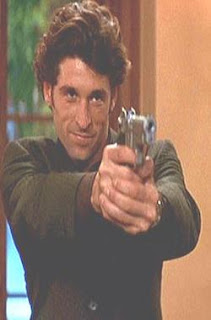 Patrick's a hot cop! (Translation: "Predictable, but fun and oh-so-sexy. B.")