"The Virtu" by Sarah Monette 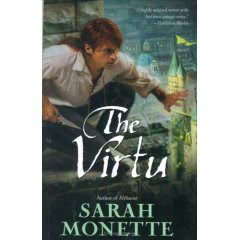 In Sarah Monette's follow-up to the wonderful Melusine, The Virtu takes up where the first novel left off, but with a new tone, and some drastically changed character relationships. First off, Felix, one of the novel's two brother protagonists, is no longer insane, having being cured the novel before. He no longer sees monsters and animal-headed creatures instead of people, and while he is still tormented, it's mostly emotional and psychological.

His thief half-brother Mildmay, on the other hand, is now a cripple. While his broken leg was mostly healed in the previous novel by the same folks who fixed Felix, he still has a twinge and a limp that refuse to go away, which basically means the former assassin/cat burglar-for-hire will soon have to find a new line of work.

While the recovered Felix would just as well like to stay with the intellectuals, healers, and scholar-wizards who helped him, he knows they regard Mildmay as little better than scum, and he also knows that the Virtu (magical whatchamacallit that Felix and Malkar broke in the first novel) is still busted and that he might be the only one who can fix it, so it's up to him (and Mildmay) to make their way back to the city of Melusine and hopefully scheme their way into being allowed near the Virtu long enough to heal it.

On the way, yes, they undergo a series of adventures, make new friends (and enemies), and plot their way through the dizzyingly detailed world Sarah Monette has created. One of the best aspects of this book is the complex relationship between Felix and Mildmay that has blossomed now that Felix is cured. Even though they've known each other for less than two years, a fierce, brotherly love develops between them, a love that forces both of them to make some very difficult decisions regarding their futures. Felix, in particular, has strange feelings for Mildmay--while his arrogance shies away from the fact that Mildmay was present for most of Felix's debilitating madness, he loves Mildmay for sticking by him. He is also, much to his horror, sexually attracted to Mildmay, a fact he struggles to hide.

While Mildmay is determinedly straight, his bond with Felix is so vividly described that it makes his ultimate decision very believable. They're very different men, and they appear to squabble more than they make up, and Felix's treatment of Mildmay (in spite of his feelings) varies wildly between the compassionate to downright selfishly abusive, but in the end they emerge as very real, and intimately connected characters. Their separate narrations continue to drive the story along at a good clip (although the sequence where they explore an underground maze drags a bit).

I've found that the supporting characters are given more room to develop in The Virtu than Melusine. Melusine was ALL about the Felix-and-Mildmay-show, so I found most of the supporting cast to be a bit, well, convenient - they were conveniently present for the specific purposes they carried out and then they conveniently removed themselves to let Felix and Mildmay do their thing. In The Virtu they're given much more detail and character development, and in the end contribute more to the overall story than before.

I've also noticed that with middle (or second) books in trilogies (or series - I'm still not sure with this one), the conclusions tend to be a little hesitant, because the author wants to save some developments for the following installments. Monette does not do so here - the novel ends with a kick I wasn't expecting to see until the end of the trilogy (or series...), which makes me all the more hungry for the next book, to see what further complications and conflicts Monette can come up with to test Felix and Mildmay. This is an excellent, near-perfect example of a good sequel - in that in remains loyal to the material established in the first while providing new material of its own.

James is dark and broody - but intelligent. (Translation: "Fantastic follow-up. A.")
Posted by AnimeJune at Friday, June 08, 2007