"Duchess By Night," by Eloisa James 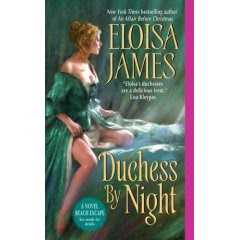 The Chick: Harriet, Duchess of Berrow, a self-described frumpy, forgettable country widow, bored from always being overlooked and pitied.
The Rub: Married a chess nerd. Who promptly killed himself after losing a game to his best friend, the Duke of Villiers.

The Dude: Lord Justinian "Jem" Strange, an incredibly wealthy and scandalous peer whose Fonthill estate has been one constant drunken after-party for several years now. Dancing girls! Actresses! Bizarre mad scientists (perhaps a nod to Marvel fans?)!
The Rub: He's a widower and a single dad to an eight-year-old girl, which means that he has to keep his daddy-daughter space very separate from the rest of his house. Also, mild daddy issues.

The Plot:
Isidore, Duchess of Cosway: My husband has abandoned me to explore the Nile! I want to attend a scandalous party that will enrage him enough to come back to me!

Duke Villers: Let's go together! Harriet, why don't you protect your reputation by posing as a boy? I can teach you how to stuff your drawers ... not that I ever have.

Isidore: Wonderful! I .... WANT TO ROCK N' ROLL ALL NIIIIIIIIIIGHT!

Harriet: AND CROSS-DRESS EVERY DAY!

Lord Strange (Jem): That Harry is disturbingly pretty - I must make him a man so that I won't be attracted to him anymore! Harry - have some raw beef!

Jem: It's meat for men! There's nothing I like more than man meat - er, scratch that! Let's try horses.

Harry: Your big, giant, tower that's standing upright at an angle, almost like it's -

The Word:
Harriet, Duchess of Berrow is bored and sad, because her husband the Chess Nerd killed himself two years ago and no one has ever seen her since as anything other than a dull joykilling widow. Isidore, Duchess of Cosway is bored and sad because she's been legally married for twelve years to a man who's spent those twelve years on another continent entirely.

Isidore comes up with the brilliant idea to attend the never-ending house party at the estate of Lord Strange - a man whose connections are so unsavory she's certain it will provide the perfect incentive to send her ne'er-do-well husband back to clean up the mess. Isidore is tired of being married to a man she's never met and tired of being a virgin and thinks a skanky party is just the ticket to reclaim/punish her wayward spouse.

Harriet decides to dress as a man for the trip, partly to protect her own reputation, and partly on the advice of Duke Villiers who reveals that Lord Strange is not fond of people who exploit their high rank. The two gals are escorted there by Villiers, a friend of Strange who is too ill to supervise Isidore himself thanks to a still-healing sword wound.

The trio arrive, and "Harry" is introduced as Villier's eccentric mama's boy nephew. Lord Strange ("Jem" to his friends) is immediately concerned for Harry's safety in his den of iniquity, as he takes one look at Harry and pegs him for a vulnerable (albeit disturbingly attractive) innocent. Jem's alright hanging with slutty actresses and cads, but he draws the line at actual sexual exploitation, so he sets about trying to "man up" Harry to teach him how to fend for himself. Harriet finds herself having a great time in pants, and Jem finds himself more and more inexplicably attracted to Harry, and eventually certain things (namely, two ^_^) come out into the open and their romance blossoms for real.
This was the first Eloisa James novel I've ever read and the first chapters were a little overwhelming - both with exacting historical detail and character arcs (some of which obviously started in previous novels that I haven't read), so for new readers the first chapters before Harriet and Isidore depart for Fonthill are a bit dense. Afterwards, though, the narrative sets off at a nice clip.

James has a sharp writing style for description, characterization, and dialogue. Her characterization, in particular, is wonderful. My last romance was And Then He Kissed Her by Laura Lee Guhrke and now with Duchess By Night I'm beginning to think I'm getting spoiled by romances with heroines I am just as interested in as the heroes. Harriet is an engaging character - she's not a raving feminist, but she soon becomes very acquainted with the pleasures of wearing breeches over cumbersome skirts and panniers and towering wigs, and she is able to enjoy that without being one of those tiresomely "feisty" heroines who yell and curse and stomp their feet very prettily until they are kissed hard enough to shut up.

As well, she is a widow who loved her husband. Thank you Eloisa James! The "unsatisfied widow" plot contrivance can be tiresome. Realistic in some cases, yes, but often annoying. James excellently demonstrates how, though Harriet's marriage to the Chess Nerd was not nearly on the same level as her relationship with Jem, it was still a pleasant relationship by all accounts and the Chess Nerd's self-inflicted demise hurt her very deeply.

Jem, also, is not yet another one of those "caddish rakes" for whom sex is an exciting game, who seem to be popping up everywhere in regencies. Reading The Duke & I by Julia Quinn tended to be a little giggle-inducing because nearly every single male character over twenty (with one drunken exception) in that novel was identified as or identified himself as a rake. They can't all be rakes! I don't want to spoil everything about Jem's character, but his development was a treat to watch as a little bit more was revealed about him as the novel progressed.

As well, Eloisa James puts to bed another romantic cliche: the Perfect Single Dad. Jem loves his daughter dearly and is concerned for her welfare, but he's definitely not perfect and Harriet very quickly discerns some very real flaws in Jem's daughter's upbringing. I thought this was a lovely addition to the narrative as well as Jem and Harriet's romance. In other romances, the Single Dad is often an idealized character who already has a successful, Swiss-watch-precise relationship with his child, one that is barely disturbed in the least by the addition of a heroine. Not so here - James demonstrates how while Jem is a capable father, Harriet's presence improves and contributes to his relationship with his daughter and his daughter's upbringing, instead of simply, well, adding more love and a shot of estrogen to an already successful family.

All in all, Duchess By Night is damn near perfect. There are very few flaws but here they are: first of all, I thought the plot device of The Game (a ultra-secret card game that apparently decides the fate of England) seemed a little contrived. I thought its introduction into the plot was a little late and seemed only to add an extra element to Jem and Harriet's disagreement for the sole purpose of making a comparison between Jem and the dearly departed Chess Nerd that wasn't necessary. As well, Harriet's dislike of Jem's late wife seemed uncharacteristic and somewhat unpleasant. It was an irrational jealousy that I didn't think was necessary for Harriet's character and seemed rather odd because a) Jem's wife was eight years dead and thus hardly competition, b) Jem loved and appreciated his wife and their marriage was partly responsible for the man he turned out to be and c) she was the mother of Jem's daughter who Harriet adores. I didn't see the point of Harriet getting angry about something so irrelevant but, thankfully, most of her dislike was mentioned in passing and didn't get in the way of the overall pleasure of the novel. Definitely a must-read. A-.
Posted by AnimeJune at Monday, June 30, 2008