"Duke of Shadows," by Meredith Duran 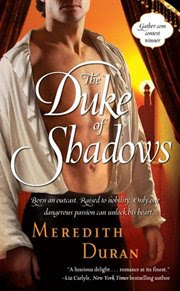 The Chick: Emmaline Martin. When she barely survives a shipwreck that killed her parents, she discovers that the proper life they had planned for her is no longer the one she wants.
The Rub: It's not enough that she has to survive a ship going down and killing her entire family - but she also has to survive an Indian uprising too. Not a lot of room left for personal problems.
Dream Casting: Kate Winslet.

The Dude: Julian Sinclair. Raised by his Indian grandmother and eventually taken under the wing of his English duke grandfather, he is a child of two worlds - and trusted by neither.
The Rub: This especially sucks because he's the only one who seems to notice that unrest is brewing in the native population of India, unrest that inevitably boil over into violence.
Dream Casting: David Giuntoli.

Evil Fiance: Awesome - and your fortune is completely intact?

Evil Fiance: I don't care so much about that.

Julian: Hey, maybe we should stop being mean to all the Indian people we're training in modern warfare and giving guns to.

All The British People: LOL NO.

Julian: Quick, Emma, I love you!

Emma: I love you too!

Julian: Now stay in this secure location that has a reputation for being a fortress surrounded by people I trust!

Emma: THIS IS ALL JULIAN'S FAULT! HE ABANDONED ME! WOE IS ME! NOW I HAVE A VIOLENT PAST!

Emma: Yes, and I hate you now, for no reason, because this book isn't long enough as it is.

Emma: Also someone's trying to kill me. I'm also dead inside. Oh, and I hate you for leaving me to die.

Julian: Um, can't we just talk about this like regular people --

Emma: 'Fraid not. I must be deep and scarred and mysterious now. And also I hate you. You know, for failing to protect me from all physical harm whether it's caused by you or not.

Julian: EXCUSE ME I'M STILL GETTING OVER THE FACT THAT YOU'RE NOT DEAD AND YOU SOMEHOW NEGLECTED TO INFORM ME OF THIS.

Emma: This is the part where you rescue me.

Julian: And will this somehow get me magically forgiven for sins that I never actually committed that are really a product of your PTSD?

The Word: When I first started reading Meredith Duran with Bound By Your Touch, I encountered a strange phenomenon where, objectively, I recognized that the writing was original and superior, the style was lyrical, the characters had layers; and yet, subjectively, I felt almost completely detached from the story.

I figured that maybe it was just a one-off, because a writing style like Meredith Duran's doesn't just turn up every day. So I picked up her contest-winning debut, Duke of Shadows, and found, to my dismay, that I felt the same way.

Detached. Uninvested. Even worse, when I stopped feeling apathetic, I felt annoyed - particularly with the dithering heroine.

The story begins in India in the 1850s, as young, wealthy Emma lives in the Residency and awaits her dismal future as the fiancee of a cartoonishly awful man named Marcus who is already hip-deep in an affair with another woman. Emma has no family in the country to run to - her parents perished very recently in a shipwreck that only Emma survived, and Emma's subsequent rescue by a ship full of rough-and-tumble sailors has left her reputation hanging by a thread.

She develops an odd friendship with Marcus' despised cousin Julian Sinclair, the Marquess of Holdensmoor. Despite his lofty English title, he is spurned by the British for his mixed blood (his mother was half-Indian) as well as his then-radical opinion that, Hey, Those Indian Blokes Don't Really Like British People Occupying Their Motherland and Might Eventually Be Inclined to Do Something About It. Emma, who survived the shipwreck that killed her parents to discover that a Proper English Life will inevitably smother her, finds solace with a fellow outcast.

And then a bloody and violent revolution happens, and Emma finds herself fleeing the city with Julian. During their flight, they share a few evasive conversations with each other and realize they're in love. Before they can go much further, however, Julian is forced to leave her at a secure location that ultimately ends up not being as secure as he thought it was, and the two are separated.

Cut to four years later. Emma has recovered from her truly traumatizing exodus from India by becoming an artist of gruesome and violent paintings about the atrocities wrought upon the natives by English soldiers. When a nobleman who shares her same opinion about the occupation of India persuades her to display her art, it finally brings her back into contact with Julian.

Unbeknownst to her, Julian has spent the last four years believing she was dead, so their reunion comes as something of a surprise to him. And here is where the novel roused me from my apathy - and dipped my opinion into dislike. Emma decides to guilt and blame Julian for things that could not possibly have been his fault, because she picked up Guilt Issues and a Mysterious Past (that's not mysterious since the reader finds out about it as it happens) in India and suddenly, this novel acquires a Big Misunderstanding and a Suspense Subplot when it had a perfectly suitable and realistic conflict already.

Here is where the novel falters. The book is essentially split into two parts - the first has an original setting, an interesting and historically relevant plot, and well-realized external and internal conflicts. The second has a conventional historical setting, a stretched Big Misunderstanding plot, a contrived Suspense Subplot, and a heroine who continues to engineer conflict beyond reasonable limits. The first half of this novel should have been a book on its own (and if you're interested in that sort of book, try Sherry Thomas' Not Quite a Husband), but as merely Part One, its effect is lessened by how rushed the development has to be.

And the second half of the novel is just run of the mill. Heroine guards her heart, hero has to seduce her, crazed madman forces hero to take care of heroine, heroine denies and discredits everything experienced hero says, mysterious past is revealed, et cetera and so on and so forth. In terms of its pacing, it reminded me vaguely of Carolyn Jewel's superior-in-all-ways Indiscreet - which also had the hero and heroine in an exotic setting falling in love in the first half of the novel before an evil villain turns it into an escape thriller.

Ultimately, Duke of Shadows is an uneven, disjointed, and inconsistent book. The heroine's Issues, while understandable, make her seem irrational and create more conflict than we need. The hero, despite telling instead of showing a rather colourful past, isn't incredibly interesting on his own. The writing is decent, and the descriptions of the setting are vivid and wonderful - but sadly, the story and the characters don't measure up.

For better versions of this novel, I would heartily suggest reading Thomas' Not Quite a Husband and Jewel's Indiscreet.
B-
Posted by AnimeJune at Monday, January 02, 2012