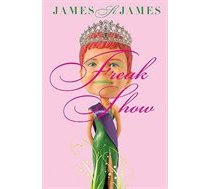 The Protagonist: Billy Bloom - fashionista, drag queen, swamp princess, death goddess, vamp extraordinaire. No one can match his style! No one can top his audacious swagger! No one can grasp his effervescent and insane creativity!
The Rub: ...except his fellow students at his all-white, ultra-conservative, southern Florida prep school.

Flip Kelly: The school's star quarterback who won a championship by doing a miraculous flip during the game - hence the nickname. In the school's eyes, he can do no wrong, so when he decides to publicly befriend Billy - the rest of the school has to do the same. But Flip's real home life might not be as charmed as everyone thinks.

Lynette Franz: The bitchy Mean Girl who wants to keep Tradition in the school curriculum and protect the pious, advantaged students from Billy's "Gay Agenda."

The Word: I've been wanting to read this book for a pretty long time, but again, it was one of the Books I Want To Get At the Library that I just never got around to because I've Got All Of These Perfectly Good Books to Read Already.

Well, finally I just decided, to heck with it, and took out Freak Show for free (yay libraries!). I read this book in TWO DAYS. That is fast for me. Super-fast. Unbelievable how quickly I burned through this book - and it's all thanks to Billy Bloom, the unbelievably manic, energetic, creative, flawed, oblivious, spectacular and unreliable teenage narrator of the novel.

Billy Bloom is a drag queen - his brain fizzes and starts with splashes of fabulousness and colour. He's got a room full of costumes and wigs and spirit gum and surgical adhesive and make-up. The guy's gifted. But he's also a 17-year-old boy stuck in an extremely conservative swamp of a Florida town with his wealthy but neglectful father, after his alcoholic mother up and decided she couldn't handle him anymore.

But Billy's got gumption. He's got spirit. He's determined to make a sparkling Gucci purse out of this sow's ear of a situation and make the best impression possible at his new school, Dwight D. Eisenhower Academy. And he makes a splash - but in the WORST way. The white, blond, privileged, preppy students of Eisenhower Academy do not react well to Billy's particular brand of pizzazz (particularly when he makes his first appearance in a Vivienne Westwood pirate costume - "what's more masculine than a pirate?"). Poor Billy finds himself targeted, bullied and brutalized - until the torment goes way out of control and lands him in the hospital.

Recovering from his injuries, Billy makes a new ally - Flip Kelly, the school's champion quarterback and social paragon. Motivated by outrage (and not a little guilt at his own unwitting participation in the attack), Flip befriends Billy and brings him under his social wing, protecting Billy from the physical abuse if not the bigotry and hypocrisy that still pervades the student body. Even though he's been beaten down, however, Billy's not out - instead, his bottomless pit of imagination comes up with even more harebrained, brilliant, impulsive ideas on how to change things in his school for the better - for everyone, not just the powerful and privileged.

Billy is the reason I read this book in two days. His voice screams off the page, waving its arms and shaking its bedazzled booty. He's ALWAYS excited and ALWAYS thinking and ALWAYS creating, and his excitement is outrageously infectious. He's like the Anne Shirley of the 21st century. His narration is highly exaggerated and sometimes unreliable, but it gets the point across so powerfully. When he's happy, he's ECSTATIC, when he's miserable, HE'S IN A PIT OF DESPAIR, when he's in love, HE JUST WANTS TO BE A SPECK OF DUST SWIMMING AROUND IN THE OBJECT OF HIS AFFECTION'S LUNGS. He also uses a lot of capslock, but I digress.

Despite the exaggeration and satire and parody of the characters and the setting, the story feels so real - and it feels real BECAUSE of the exaggeration, because of the unbreakable current of sincerity in Billy's voice. When I was 17, I felt everything was SO ALL-ENCOMPASSING, I felt my bullies were SCREAMING VILE HARLOTS, my life could NOT BE CONTAINED IN MERE LOWERCASE LETTERS. Billy is such an amazing character and you feel for him so powerfully - even if you are scratching your head when he elects to be blind for an entire day because he simply MUST wear twelve pairs of fake eyelashes to complete his look.

I'm personally religious and one of the Biblical messages that's seen a lot of action in my upbringing is "when you have a torch, don't hide your light under a bushel." When you've got a gift, you don't hide it away, you don't build your mansion at the bottom of a hill (or in a swamp), you don't wear your sequined, intentionally-singed 1920s flapper dress only in your closet and nowhere else - you shine it for everyone. And Billy's such a bright, screaming, alive character that I can't understand how ANYONE would want to snuff that light out under a bushel.

Freak Show is a flaming gut-punch of a novel, very emotional, very personal, and fun as hell to read. It's searingly honest and completely fantastical. It wrung me out, frankly. It's exciting and fast-paced and zany and painfully, painfully funny. I highly recommend it.
A+
Posted by AnimeJune at Tuesday, January 31, 2012