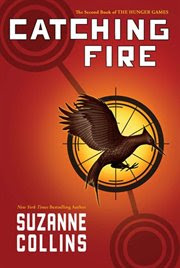 Okay, so this is going to be a bit of a change-up - not a regular thing, unforch, but the fact of the matter is:

I read this book and totally forgot to review it.

It got lost in the shuffle.

I clicked on my YA tag and saw that there was no review for Catching Fire, even though I did read it.

And that's when I realized I'd forgotten. Eeep. I'd also already given the book back (it was borrowed). I also read it a month ago or more.

So I'm doing without my usual rigamarole because this is all from memory. I'm probably going to forget or misspell character names, that sort of thing, but my impressions of this novel are still strong.

My main impression? I felt cheated. *Spoilers for Both Books Ahead*

Let me explain. Catching Fire takes off after Hunger Games ended, with Katniss and Peeta returning triumphantly to their home district after Katniss' quick thinking saved them both from certain death. There's never been two winners in the Hunger Games before - the yearly tradition where each district sends two teenage "tributes" to a central arena where they all fight to the death.

Unfortunately, thanks to her little stunt, Katniss is under intense scrutiny from the Evil Powers that Be, who worry her defiance of the Games will spark a revolution they will have to mercilessly crush. Their Evil Leader, President Snow, makes it very clear to Katniss that she will have to toe the line as she makes her winner's progress through the districts - or else her family will suffer the consequences.

As in the last novel, "toeing the line" involves faking a romantic relationship with Peeta, which would paint her unorthodox moves in the Games as the actions of a lovestruck teenager rather than a rebel stickin' it to the man. Peeta is a nice enough guy, but Katniss also has feelings for Gale, a loyal childhood friend, and the idea of having even her romantic life controlled by the Capital (possibly for the rest of her life) is abhorrent.

The first half of the novel is quite strong. As Katniss and Peeta make their winners' progress through the districts, they witness that it's not only their hometown of District 12 that's dissatisfied with the Capital's tyranny. People everywhere feel the unfair weight of Capital control and the Capital's recent implementation of harsher punishments and regulations is taking its toll. Katniss has to war with some pretty hefty arguments - should she think of her family first and keep quiet, or should she look at the big picture and help turn that spark of defiance into a conflagration that could make things better for everyone? Or would that only end in more death and destruction?

The novel was well on its way to becoming something awesome when President Snow announces the rules for the Quarter Quell - the special Hunger Games that happen every 25 years (how convenient). Because it's the 75th anniversary of the Hunger Games, the Capital can choose just about any kind of rules it wants, and this time around, it decides that tributes will only be picked from the surviving Hunger Game winners. Which means that Peeta and Katniss have to compete in the Hunger Games again.

And then the novel's all downhill from there. It's not particularly badly-written (and the design of the particular Games is clever), but it's just. More. Of. The. SAME. Cinna gives Katniss a flamboyantly awesome entrance. Katniss meets more contestants and has to wonder if she'll have to kill them or be killed. Weird, poorly-developed sci-fi dangers are confronted and defeated. Katniss has to pretend she loves Peeta (more than she's already starting to) - only this time she's faking a pregnancy too! It's all well and good but I liked it better WHEN I READ ALL OF THIS THE FIRST TIME, IN THE HUNGER GAMES.

And I have to admit, this is a review where I will HAVE to spoil the ending, because it's integral to how I viewed this novel and why it left me so disappointed and angry. SPOILERS: At the end of the new Hunger Games, Katniss is rescued by her mentor Haymitch and is told that he and a bunch of conspirators have engineered the revolution, which is already in progress.

Yes. THIS is the part of the novel that angered me the most - ALL of the super-important stuff to the story happened TO OTHER PEOPLE, OFF-SCREEN. I, as the reader, missed it, because I was too busy slogging through what was essentially a retread of the first book. I'm sorry, but NO. I'm the fucking reader. I should have been allowed to read how the revolution was started. I should have gotten to read about the spies and the sabotage AS IT HAPPENED, not SECONDHAND at the very end of the novel. After getting to the end, I felt as if the author had put me at the kiddie table while the adults had their own conversation without me.

I've never had to worry about sequels in book form because usually, they don't end up in the same pitfalls as, say, movie sequels. Movies, because they are usually self-contained narratives, don't require a sequel - so when sequels are made in order to capitalize off the success of the first one, they often fall prey to the Same But Different trope - where they essentially tell the same story as the first movie, just with a different villain/setting, etc. Look at Home Alone 2 as an example - exact same plot, just in a New York hotel.

But with books? Where they are often written with a series in mind (as The Hunger Games clearly was), I expected Catching Fire to tell a different story. It started to, but halfway through, we get another Hunger Games, and somehow this is so much more essential to the reader than the actual revolution. And honestly, it didn't leave as big an impression on me as the first novel.