"Crazy For You," by Jennifer Crusie 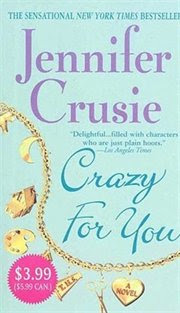 The Chick: Quinn McKenzie. When she rescues an abandoned little dog against her practical boyfriend's wishes, she realizes she's settled for a life she doesn't want because she's afraid of rocking the boat.
The Rub: She decides to dump her old life (including her boyfriend), but finds a whole new set of problems arise when she tries to start something new (including her now ex-boyfriend).
Dream Casting: Laura Linney.

The Dude: Nick Ziegler. An uncommitted mechanic who's been serially dating 20somethings for 15 years or so, he's always had a warm, loving friendship with Quinn - and thankfully, sexual attraction never got in the way, because she was always dating someone else.
The Rub: Now that she's cut loose and is determined to live the wild life, he's finding it harder and harder to keep friendship and sex separate.
Dream Casting: Sam Trammell.

Quinn: Oh look a dog! I will love her and squeeze her and she will be mine.

Quinn: OMG SHUT UP BILL. WHY DID I EVER HANG OUT WITH YOU? I know, I'll move completely out of your apartment and leave you a tidy little note. I never loved you in the first place so I'm sure it'll be like the two years you spent in love with me never happened!

Bill: And I'm sure I'll take this remarkably well with no psychotic breakdowns of any kind!

Quinn: WHAT THE FUCK IS WRONG WITH YOU NICK, MEN ARE NOT SUPPOSED TO REFUSE SEX DID YOU NOT READ THE DUDE RULE BOOK? I just want a fling!

Quinn: OMG NICK, you banged me to Fleetwood Mac - HOW DARE YOU TREAT ME LIKE ALL YOUR OTHER TARTS? I THOUGHT YOU LOVED ME!

Nick: Something is legitimately wrong with you.

Bill: Not as wrong as something is with me! *does crazy things*

Nick: Okay, Quinn, I'll protect you, but I can't commit. I can't even sleep in the same room with you.

Quinn: Why not? There's a killer on the loose!

Nick: BECAUSE I ACTUALLY *DO* READ THE DUDE RULE BOOK AND IT SAYS I CAN'T COMMIT UNTIL SOMEONE ACTUALLY TRIES TO KILL YOU, OKAY?!

Nick: That'll do it!

The Word: Okay, so I haven't read Jennifer Crusie in a while. Maybe I've lost touch. Maybe I've grown past her particular blend of humour.

Or maybe this book just sucked.

Until she rescues a tiny abandoned dog named Katie. She's always wanted a dog. Bill tells her to be reasonable, to be logical, their apartment doesn't allow pets, but Quinn is done being reasonable and insists on keeping the animal. When she comes back home the next day to find that Bill has taken Katie to the pound against her wishes - that's the last straw. She's done with Bill, she's done with boring, she's not going to wait around for life to get exciting.

And (of course) part of her "Get Life Exciting" plan is to get royally laid - by none other than Nick, her ex-brother-in-law, a pathologically commitment-phobic mechanic who, despite his ill-fated marriage and subsequent divorce from her sister, remains good friends with Quinn. And while all this is happening, good ol' Bill careens completely off the deep end and turns into a sociopathic stalker.

So let's start out with what I don't like, which is, frankly, most of this novel. I had some real problems with the characterization of the protagonists and their so-called history. Quinn is someone who wants to get some excitement, so she hits on her old friend Nick, who repeatedly spurns and dodges her advances because he's uncomfortable with mixing sex and friendship, despite his intense physical attraction to her. But Quinn is determined to have him, because she's a Free Wild Woman Now, but when she finally gets one night in bed with him, she flips her lid and labels him a jerk when he won't immediately commit - even though she made it clear she wasn't out for a relationship and just wanted Free Wild Woman Sex.

We're told that their friendship is decades long, but it's barely even referred to, and I don't think it really fits with Quinn's cavalier treatment of it with her desire for a dirty, sexy fling - especially since she emotionally reacts as if she'd expected a committed romantic relationship right away, which seemed terribly unfair to Nick.

That being said, I didn't like Nick much, either - he's described as someone who loves living alone and having no responsibility and is terrified of waking up next to another person - but I found that I kept asking, "Why?" What made him this way? Why don't we get any scenes or description that help develop why he's grown into this lifestyle? Nick is very shallowly developed, and his I Just Can't Commit! mantra comes off as a lame, stereotypical sitcom characterization, where his pathological solitude is filed neatly away under the It's Because He's Got Man Parts, Duh explanation.

And shallow is generally the impression I got from the novel as a whole - a lot of the surface appeal of the Jennifer Crusie trademarks are there (yappy dogs, romantically unsatisfied sassy girlfriends, bitchy town rednecks, colourful underwear, parents with Interesting Secrets), but everything's presented in such an offhand, underdeveloped way that it's only skin deep.

In fact, the most profound aspect of the entire novel is Bill's gradual descent into complete and utter madness - which makes it really jarring when the people he's stalking keep behaving like they're in a safe romantic comedy. Mild spoilers - there's a scene that happens directly after Bill assaults Quinn and rips her shirt off. Nick rescues Quinn and takes her back to her house - and not only does she not decide to call the cops right away to report an assault, but she decides it's a great time for her and Nick to have sex - while an unapprehended Bill watches from outside the window. Because, you know, THEY HAVEN'T CALLED THE COPS ON HIM YET.

Jennifer Crusie is also a fan of using repetition of a certain trait, word or mantra to define her characters and it can be extremely effective - but sometimes it can be way overdone. For the Crazy For You drinking game, take a shot every time Crusie uses the word "round" to describe Quinn. Seriously - every guy with romantic designs on her uses that word, over and over - soft and round, hot and round, luscious and round. By the end of the novel I was half-convinced she was perfectly spherical.

Ultimately, while Crazy For You had all the basic ingredients of a classic Jennifer Crusie novel, they weren't developed well enough. This is a book that's really, well, only okay, and worth skipping in favour of a more fulfilling book.
C
Posted by AnimeJune at Thursday, February 02, 2012