"Where It Began," by Ann Redisch Stampler 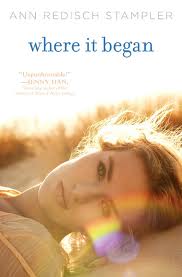 I thought I'd point out that this was my *first* eBook read - I purchased it for the Kobo my mother generously lent to me so that I could read it on the way to New York without taking up valuable room in my luggage. All in all, a good reading experience!

The Protagonist: Gabriella Gardiner. Formally a high school nobody, a strenuous summer of make overs allows her to catch the eye of golden boy Billy Nash.
Her Angst: Until she apparently crashes his car while drunk. As her future becoming increasingly uncertain, she'll have to decide how much she's willing to give up to ensure Billy Nash's love.

Vivian: Gabby's mother - incredibly vain and image-oriented. Drags Gabby along for a summer of hair treatments and clothing shopping in an attempt to create the perfect daughter.

John: Gabby's reclusive, alcoholic father whose repeated business failures keep the Gardiners at the bottom of the totem pole in their swanky neighbourhood.

Billy Nash: Insanely popular and wealthy, the undisputed king of the high school social scene can do anything, get anything, and get away with anything.

Lisa: Gabby's friend, from an incredibly religious family who restricts her social activities.

Anita: Gabby's other and equally concerned friend. Her Indian family only wants her to date nice Indian boys.

Huey: A talented if oddball photographer for the high school yearbook and friends with Gabby, Lisa, and Anita.

Angst Checklist:
The Word: The novel opens as seventeen-year-old Gabriella Gardiner wakes up drunk, clutching the keys to her boyfriend's car - which she has apparently reduced to a smoking wreck around a eucalyptus tree. She wakes up later in a hospital with her face horribly damaged, the police asking questions, and a giant gap in her memory where the particulars of her car accident ought to be. As the cherry on top of the sundae of suck, her wealthy, popular boyfriend Billy Nash is nowhere to be found.

Billy's absence hurts Gabby more than anything - as she heals in the novel's first half, she recalls how she first won the attention of the most popular boy in school, despite being an underachieving sub-regular nobody in a prep school full of the rich and brilliant. She loves Billy, and constantly strives to please him in order to keep him from finding out how truly average and unremarkable a nobody she truly is.

Once she's released from the hospital in the novel's second half, she realizes she's become worse than a nobody: now she's a teenage delinquent who stole and crashed her boyfriend's car. Amazingly, however, Billy Nash comes back into the picture, and, desperate to hold on to him, Gabby's willing to do anything he says, anything he asks, even as the consequences of her actions tighten around her.

As you can probably tell, Gabby is a real piece of work - raised by vain, vapid parents who constantly aspire to wealth and status without ever actually possessing it, she has no self-esteem to speak of. If this book had a Drinking Game, the only rule would be to take a shot every time Gabby describes herself as "sub-regular": she truly believes she's less than average. So it's no surprise how she becomes fixated on her miraculous relationship with the uber-popular Billy Nash, to the point where it seems her entire self-worth hangs on whether he stays with her or not.

In the wrong hands, a character like this could have been a doormat. However, Stampler gives Gabby a cutting, observant and hilarious voice. While she's got serious blinders on when it comes to what's important about herself, her satirical observations of the hypocrisy of the people and the situations around her are hilarious. She's flawed and funny and human - however, even in her own story, she is little more than an observer, so I had trouble considering her an actual heroine.

That, ultimately, is the largest problem I had with Where It Began - while I felt for Gabby and liked her voice, her character had no agency and makes almost no decisions for herself in the course of the entire novel. She's an utterly passive character. She's told what to do for most of the story - by her mother, by Billy, by the various therapists and doctors and care workers - and then she does it. Things just happen, and Gabby reacts to them - with occasionally hilarious snark, but she doesn't actually influence or impact any of the events in the story.

This never changes, even by the novel's end. While she comes to a few long-awaited realizations, she doesn't act or take initiative on her own. Even the glorious All Is Revealed moment at the end is orchestrated by someone else. In the end, Gabby is still being told what to do - only this time she's, um, allowing herself to be told what to do by the right people? To me, a heroine impacts her story with her specific actions and decisions, so that the conclusion to her story occurs as a result of her choices. In Where It Began, Gabby doesn't make any real choices, she just gets lucky - which weakens an otherwise entertaining story.

You can purchase Where It Began here.