"Seize the Fire," by Laura Kinsale 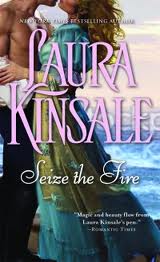 The Chick: Olympia St. Leger, Princess of Oriens. Born and raised in exile in Britain, she's at the mercy of her evil uncle who seeks to marry her in order to secure the throne for himself.
The Rub: She has a plan to introduce democracy to Oriens to prevent further terrible monarchies, but to do that, she'll have to place her trust in the famous Captain Sheridan Drake - who has some dark secrets of his own.
Dream Casting: Kristen Schaal.

The Dude: Sheridan Drake. The famous war hero returns from the Navy to discover his deceased father bankrupted him and left his own fortune to be dispensed of at the discretion of his ex-mistress - who happens to hate Sheridan's guts.
The Rub: When an incredibly gullible princess sitting on a priceless jewel collection comes to him for help, he figures separating her from her gems will be easy pickings - but what if she separates him from his heart?
Dream Casting: Wes Bentley.

Sheridan: OMG I HATE THE NAVY, THE OCEAN, AND EVERYTHING! *tries to kill commander, trips an saves everyone*

Olympia: Please help me save my country from the oppression of monarchy!

Sheridan: Please help myself to your jewels? Don't mind if I do!

Olympia: Hey, while you do that, why not introduce democracy to the sailors on our ship! *sparks mutiny* Why not reveal Sheridan's secret identity to a totally trustworthy sailor whom I've never met! *nearly gets shot* Why don't I start screeching about my jewels in front of some escaped convicts? *nearly gets raped*

Sheridan: Wow, you totally fell out of the Stupid Tree and hit every branch on the way down. It's a good thing you're hot.

Sheridan: Now I love you.

Sheridan and Olympia: *rescued and on board a ship*

Sheridan: ....and now I don't. Because I'm dark and damaged and stuff. Why don't I develop a mental illness, just to make things more interesting?

Olympia: Now it's time for me to fix you!

Olympia: Never mind. Back to being helpless until I'm rescued!

Sheridan: Hey look I'm suddenly rich now for no reason and your kingdom doesn't want you anymore, also for no reason. Let's hook up!

The Word: I honestly never believed I would be typing the following words, but, I disliked a Laura Kinsale novel and thought it was horrible.

My safe, comforting worldview has been shattered. There's some things in this world that you think are just indisputable facts: Snow falls in winter. A full moon comes every 28 days. And Laura Kinsale novels are awesome.

That belief lasted until I read Seize the Fire, an inexplicably boring and haphazardly plotted mess of a novel.

Naval Captain Sheridan Drake is a famous war hero - entirely by accident. When his crazed attempt to murder his incompetent commanding officer during a sea battle results in him accidentally saving the fool's life and the lives of his shipmates (for reals), he is knighted and his name hailed across the nation as a brave selfless hero. Too bad he's completely broke - thanks to his apparently insane father who left him a demonically booby-trapped house while placing his fortune in a trust ruled by his manipulative ex-mistress, Julia.

Olympia is the princess of the tiny nation of Oriens, but she has lived her entire life in genteel exile in England after her despicable uncle murdered her parents. She has spent her twenty-four years of life stewing in self-loathing and French philosophy with her governess, Julia (yes, that Julia) and when she discovers her uncle is about to petition the Pope to marry her and seize the throne (consent-optional), she pays a call on the one man she knows will aid her in her plight - Captain Sheridan Drake. Surely, this glowing paragon of manhood will help escort her to Oriens to introduce democracy to her loyal subjects, or at the very least to Rome so that she can prevent her marriage by asking the Pope nicely.

Now, you might think Sheridan would be the harder character to like, as he immediately decides to fleece the plump little princess of her crown jewels and leave her in the lurch. Except not. As Sheridan rapidly comes to learn, Olympia is a breathtakingly stupid and obnoxiously pathetic heroine who is Literally Terrible at Everything except for crying, biting her fist in terror/misery/self-loathing, and almost getting Sheridan shot in the face. Poor Sheridan has to spend the next 500 pages of this massive book babysitting, protecting, getting waterboarded for (!), and Not Boning 160 crybaby pounds of narrative deadweight.

The sheer number of times Olympia almost gets Sheridan killed would be funny if she wasn't such a self-rightous TSTL dimwit about it. I hated Olympia - I thought her one of the worst and most useless heroines I've ever read. She never develops any spine, intelligence, or even any ambition beyond the incredibly shortsighted one of bestowing democracy upon everyone she meets. Once she has a protector her desire to free her people slips into the background. What does she want to do with her life? What does she do in her spare time? Who is she beyond this chubby, whinging, constantly complaining mess of a person? Her "kindness" and "purity" are supposed to be the Polysporin to Sheridan's Scraped Knee of Angst, but otherwise Sheridan seems to like her mainly because her breasts are the only things more impressive than her tear ducts.

Of course, most of the romantic progression involves Sheridan yo-yo'ing between Total Adoration Despite Being a Dark, Damaged Dude and treating Olympia like a turd in order to push her away from him because he's a Dark, Damaged Dude. You can imagine how quickly this becomes repetitive in a 583-page novel.

The thing is, the whole structure of the novel is a hot mess. The plotting is like a suitcase packed by an absentminded traveller - the type who forgets crucial items, only to shove them in at the last minute, one on top of the other, even though they don't really fit. The characterization of everyone except for Sheridan is atrocious, as their storylines are picked up and dropped, seemingly at random - Julia Plumb, for example, is depicted as a villainess even though she's only "on screen" for one chapter, in which she acts quite concerned and surprised. The only reason we even know she's a villainess is because Sheridan explicitly tells us how evil she is. Or Sheridan's father, who's mentioned in the initial chapters as a madman fascinated with pranks and booby traps, until his character and his impact on Sheridan is abruptly abandoned, never to be mentioned again except in passing.

In the last act of the novel we have, without any previous development of such plot points: the sudden insertion of severe and constant PTSD into our hero's character description, an entirely random violent past, an aristocratic dandy sidekick who appears 20 pages from the end and serves no narrative purpose whatsoever, a nonsensical misunderstanding that ensures the hero has a massive fortune by book's end, and an ambiguous Arabian Sultan who is apparently crazy in love with Sheridan until he's abruptly written out of the plot.

The thing is, Kinsale's written whackadoo plots before - evil cults, poisoned shellfish, kidnapped bulls, oral sex lessons from Catholic priests, white ninjas, and magic-sword-eating sharks, to name only a few. The thing is, in those cases she developed those ideas so that they made sense as one read them within the context of the story. She didn't just cram them in with no notice or precedent.

And it's just as likely that those plots appeared believable because they were populated by realistic, well-realized and sympathetic characters. The characters and their motivations and anguish felt real, so their adventures seemed real as well. In Seize the Fire, Sheridan's backstory is too vastly complicated to take very seriously (his previous positions include naval captain, harem slave, jewel thief, death goddess assassin, and gigolo - not making this up), and, as mentioned before, Olympia is such a pathetically incompetent twit that I had no empathy for her or her travails.

Laura Kinsale's writing is solid enough, but with such a randomly plotted storyline and dippy characters, there's just no reason to go on. Seize the Fire is all noise and no substance.
D+
Posted by AnimeJune at Tuesday, October 09, 2012