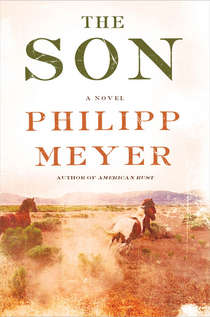 Eli McCullough: A young boy in 1850s Texas who is captured and then adopted by a Comanche tribe.

Peter McCullough: A member of a prominent ranch family who grows increasingly troubled by his town's anti-Mexican sentiment.

Jeannie McCullough: A young heiress who learns to reject the gender conventions of her time to become a successful oil magnate.

The Word: This was a weird book for me to read. It was a gift from my Amazing Roommate Emily from BEA, part of the goodie bag she received from the Harper Collins party. It sounded like a multigenerational Southern story (which intrigued me), and got an A review in Entertainment Weekly.

The most positive thing I can say about The Son is that it was just interesting enough for me to keep reading, and it taught me a bit about Texas and Native American history. For the most part, however, I was only mildly entertained.

The novel's divided between three different members of the same family over three different time periods, as they try three different methods of amassing wealth. Eli, in the 1860s, is adopted by the same Comanche tribe who butchered his family and burned his homestead. He grows into a ruthlessly practical businessman who learns that every thing anyone owns has to be stolen from someone else.

His son, Peter, runs the now-successful family's cattle ranch in 1915, until some missing cattle give his relatives and countrymen the excuse to murder the neighbouring Mexican landowners and acquire their land. Only Peter seems to recognize the hideousness of what they did, and when he winds up falling in love with the one remaining survivor of the massacre, he has to decide between his family and his morals.

Finally, we have Peter's great-niece Jeannie, the remaining McCullough heir who helps bring the Cullough family into the oil age, defying the conventions imposed on her gender to do so - but at great personal cost as well.

Eli's storyline was interesting, but Peter's was highly repetitive - full of constant self-recriminations and angst at the bloodthirstiness of his peers. Jeannie's was yet another example of Sad, Unsatisfied Rich People Fiction. Honestly, all three characters are so cold and detached, it was difficult to feel invested in any of them. I learned a little bit more about oil, cows, Indians, and why Texans hate Mexico - but about the characters themselves, I feel I learned little.

The description of the setting was vivid, and the history of the area was fascinating (especially when filtered through the McCulloughs' cynical points of view), but without relateable characters, I turned the final page without really feeling like I'd acquired anything worthwhile.
C
Posted by AnimeJune at Sunday, July 07, 2013