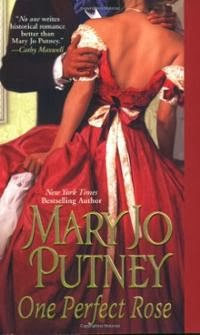 The Chick: Rosalind Jordan, a.k.a. Marguerite St. Cyr. The stage manager for her adoptive family of travelling players.
The Rub: Although her family is loving, she does long for stability and security.
Dream Casting: Anna Torv.

The Dude: Stephen Kenyon, Duke of Ashburton, a.k.a. "Stephen Ashe." When he's diagnosed with a terminal illness, he rides off on his horse to find the adventure he'd previously been too staunch and duty-bound to pursue.
The Rub: He quickly falls in love with fair Rosalind, but what kind of a future can he give her when he doesn't have one himself?
Dream Casting: Christian Bale.

Stephen: Poop. Screw this! *rides off on his steed*

Rosalind: You saved my brother! How can I repay you?

Stephen: But you can marry me and have security!

Non-Shady Doctor: Turns out you're just being poisoned!

Rosalind: I means you're going to live. With me!

The Word: I seem to be saying, "I've burned out on romance" with more and more frequency. Trusted authors are disappointing me, new authors are boring me.

Perhaps it would be more accurate to say that my over-reading in romance over the last couple of years has refined my tastes in the genre - my tastes and standards have become pretty specific and exclusive and rule out a huge chunk of the genre itself. Which makes me sad - and more than a little nervous since the vast majority of my TBR pile is taken up by romance novels.

People have suggested I take a break, but I love the romance community and industry, and I also don't want to over-read in the other genres I'm enjoying now (YA especially), because I know I'm a person who, when she enjoys something, wants to do and read nothing but that special something until I grow absolutely tired of it. My iTunes account is full of songs I've listened to thousands of times that I can't bear to hear anymore.

Long story short - I was underwhelmed by Putney's One Perfect Rose, for no real reason than I think I'm growing apart from romance.

Rosalind was a foundling child who was rescued and raised by a quirky, loving family of travelling actors. While not a great actress herself, she works as their stage manager as she helps them perform Shakespeare in remote English villages. She comes complete with a Mysterious Aristocratic Past and a Dead Asshole Husband, but to her credit, she behaves like a relatively cheerful and rational person about her baggage.

While travelling to their next gig, Rosalind's brother Brian falls into a river and is rescued from drowning by a mysterious, wealthy gentleman named Stephen Ashe. The players take him in to help him recuperate from his own injuries and he and Rosalind develop an emotional connection.

Stephen Ashe, however, is really Stephen Kenyon, the Duke of Ashburton. He's also dying of liver disease. Furious at both his diagnosis and at how he believes he's wasted his life clinging to duty and propriety, he fled his privileged life and home to try and wring some last passion from life before his comes to an end. While he's quickly coming to care for Rosalind, he's unsure of how to proceed with her now that his days are numbered.

Both protagonists are empathetic, more or less sensible people who are refreshingly honest with each other (mostly) and there's some interesting conflict and drama. There's nothing that could really qualify as bad until the last third, when the author tries to forcibly inject the hero with a spiritual awakening using ghosts and past lives in a really goofy, ham-handed way.

However, I found myself growing bored and annoyed with the use of obvious tropes (Orphan with a Past! Daddy Issues!) and the romanticized perfection of just about everyone who isn't a villain (is no one on the protagonists' team allowed to be hurtful or have flaws?) and the repetition of certain words and phrases that are too familiar and overused in the genre to inspire the romantic longing I'm sure the author intended.

I did enjoy a measure of comfort reading throughout part of it, and the hero and heroine are such genuinely nice, reasonable people, so I would recommend it - but you may want to get a second opinion from someone who's more engaged with the genre than I am, at the moment.
B
Posted by AnimeJune at Monday, September 23, 2013