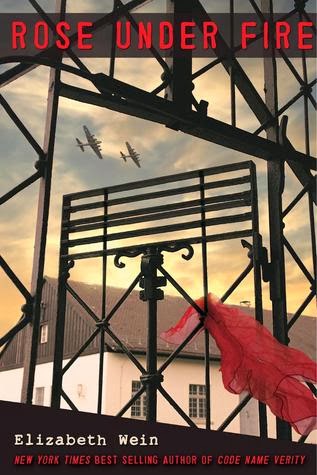 The Protagonist: Rose Justice. A young American girl who flies planes for the ATA - until she runs afoul of some German fighter pilots.
Her Angst: Interned at the Ravensbruck concentration camp, Rose must fight for survival. Because no one on her side knows where she is, if she dies - she'll literally vanish, just like thousands, millions of others.

Roza: A brash, passionate, and furious Polish prisoner and Rabbit who has been left crippled by sadistic Nazi experiments.

Lisette: The "Camp Mother" of Block 32 who nurtures her charges to help cope with the grief of losing her own children.

Gitte: Their block leader who helps protect the people in her charge - but not without consequences.

Anna Engel: The German criminal who oversees Rose and the others. While the others despise her as a German convict and collaborator, Rose comes to learn her life is harder than she realized.

The Word: At Book Expo America 2013, you would have been hard-pressed to find an ARC more lusted over than Rose Under Fire, the companion novel to Elizabeth Wein's best-selling, heart-breaking, love-taking (?) historical novel Code Name Verity.

Rose Justice is an American pilot in England who ferries planes for the Air Transport Auxiliary - Maddie from Verity is a coworker and friend and even appears briefly in the novel. When Rose gets lost transporting a plane across France, she's captured by the Germans, and winds up in Ravensbruck. A concentration camp. Oh, it's a "fairly ordinary" concentration camp. Not a death camp like Auschwitz or Treblinka. But that knowledge doesn't comfort Rose or the other female inmates she encounters and befriends.

While Code Name Verity had some pretty horrific scenes (particularly regarding Queenie's torture), the vast majority of Rose Under Fire is composed of these. Life in an "ordinary" concentration camp still involves starvation, illness, and torture while crammed into appallingly crowded living conditions. While Verity told the story of a moving female friendship that was then placed under extreme duress, Rose examines female friendships that are formed during, because, and in spite of extreme duress.

Rose is sent to live in Block 32 and befriends Roza, one of a group of girls who are called Rabbits, thanks to the hideous experimental procedures inflicted on them by Nazi doctors. Of course, these girls are also huge liabilities to the Germans because they are living evidence of their crimes against humanity. When the camp administrators decide they need to cover their tracks, Roza and the Rabbits are put in danger. Rose and her fellow inmates have to come up with a plan to keep the Rabbits safe, alive, and capable of telling the world what was done to them.

From her accounts of her life before her capture, it's clear Rose comes from a family of wealth and influence. Rose is a very privileged character, but that works in this story as she becomes aware of her privilege, and of how life at the camps turns even the most basic rights (to warmth, to food, to being able to sit down) into privileges. I loved Rose because she's also a writer (a poet, to be more specific), and when the ability to perform such a simple act is taken away from her, she turns to memorization and oral storytelling.

The concept of truth is integral to Rose Under Fire. Before her capture, Rose dismisses reports of the horrors of the camps as anti-German propaganda. "It's like trying to get us to believe the Germans eat babies!" she remarks at one point. But the truth is a precious, dangerous thing - as the Allies close in, the Nazis try to destroy the truth that would condemn them just as the prisoners of Block 32 fight to preserve it.

And yet fiction also serves a purpose, a theme I appreciated. To lift their spirits, Rose becomes a storyteller, reciting poetry and inventing tales of her boyfriend Nick coming to rescue them. Rose and her friends also become adept at lying and obfuscating details and numbers in order to protect themselves, using fiction to protect the truth. The truth may not set them free, but it does prevent them from vanishing off the face of the earth.

Like Verity, Rose Under Fire is an epistolary novel comprised of Rose's journal entries before she was captured, and the frantic, compulsively-written entries after her escape. This style of writing works both for and against this novel. The diary style renders the constant horrors of the setting bearable, as we, the readers, are buffered from it by the knowledge that these events aren't "happening" right now, but are being told to us by someone we know has escaped. The downside is that, for me, I felt emotionally distanced from the novel - but I felt the same way about Verity as well, at least until the gut-punch of the ending.

Rose Under Fire is a worthy companion novel to Code Name Verity - they both use epistolary narratives to explore the importance of truth and the strength of female friendship. Rose is definitely a darker, bleaker novel than Verity, but it is a darkness everyone needs to experience now and again, in order to remind us why light is so important.
B+
Posted by AnimeJune at Saturday, September 28, 2013

Labels: B Plus Reviews, historical, YA