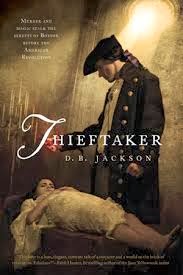 The Corpse: Jennifer Berson. The young daughter of one of Boston's wealthiest citizens, she's found dead in an alley after an anti-Parliament riot.

Abner Berson: Jennifer's father, and the head of one of Boston's most prominent families.

Cyrus Derne: Jennifer's fiance, who can't explain his whereabouts during her murder.

Mister Trevor Pell: A young minister with spellcaster's blood who is sympathetic to Ethan's magical investigations.

Sephira Pryce: A criminal queenpin who masquerades as Boston's first and most respected thieftaker. She does not take kindly to Ethan nosing in on her usual clientele.

The Word: Ethan Kaille works as a thieftaker in pre-Revolutionary War Boston. It's a risky living, made riskier by the fact that he's a conjurer - an aspect of himself he keeps (poorly) hidden thanks to widespread fear against magic users. And Sephira Pryce - Ethan's popular and much more ruthless competitor - ensures he never lands the truly wealthy clients.

Until Abner Berson, one of Boston's richest landowners, asks Ethan for help. His young daughter Jennifer was murdered on the night of a deadly riot against Grenville's Stamp Act. Berson would like Ethan to recover a priceless brooch that was stolen from her corpse - but what he really wants is to find out who killed her.

Against his better judgement, Ethan takes the job, and it doesn't take long to discover why Berson hired him: Jennifer was killed with magic. And the conjurer responsible really doesn't want Ethan interfering in his plans.

Juggling genres can be a tricky thing, but Thieftaker does an admirable job. Jackson combines a relatively unusual historical period with a sparingly-developed fantasy element. I enjoyed how the novel briefly explored both sides of the American colony situation and mined the natural conflict of that period for tone and drama. Broad, efficient strokes are used to describe and explain Ethan's powers and their influence on his circumstances in a way that develops him and the world around him without cluttering the storyline or slowing the pacing - a common flaw in crossgenre mysteries.

That being said, the interesting setting and magic worldbuilding are used to tell a fairly straightforward mystery that grows more repetitive as Ethan pursues the case despite escalating opposition. The mystery itself - as well as the revelation and payoff at the end - seem pretty small potatoes in comparison to the other things that Ethan and his allies have to deal with, but perhaps as the series progresses both aspects of the narrative will be able to balance out.

Thieftaker is a solidly-paced whodunnit with a lot of interesting window-dressing. Provided the author can learn to balance the different genres a little better, the rest of the series looks promising.
B
Posted by AnimeJune at Saturday, October 05, 2013