Good Things Come to Those Who Wait (and WAIT) 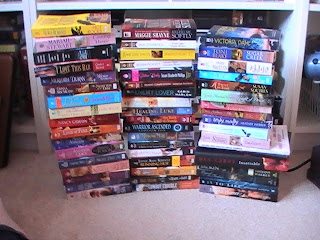 Yes, after nearly a month of waiting, my last box of RWA 2010 loot came in, fully intact! Ultimately, shipping my books in three flat-rate boxes cost a bit more than last year and took a bit longer so I guess I learned my lesson. But still! Loot! I won't be creeping into any more book stores for a long time after this. Aren't they pretty?

In other news, after a long, long and incredibly spirit-draining three months of unemployment, I now have a job. A pretty kick-ass job, as a matter of fact. A job that is about a million times better than the last job I held. Good pay, fantastic benefits, a great environment, room to advance, easy transportation, my own cubicle and name plate, work that I like and am good at. The perfect job, really.

Let me tell you, being unemployed sucks. Being unemployed for three months sucks balls. Being unemployed for three months, whilst enduring dozens and dozens of job interviews and placement agency testings that shoot my hopes up only for nothing to come of them, sucks ZOMBIE DONKEY BALLS. I mean, I kept getting all these interviews, so I thought something about my resume must be good. But months passed and I never got hired, despite all those interviews, so the creeping paranoia set in that something must be wrong with me. Something I didn't know about. Something about my interview skills - was it my fashion sense? My references? Bad breath? What could it be? How could I fix it if I didn't know what it was?

Hopelessness began to set in. I felt like the loser slacker in the sitcoms who still lives with her parents and can't get a job. I no longer felt excited about interviews - no, that's not true. I still felt excited when I got to the interview and it seemed to go well and the company seemed great, but I couldn't afford to get my hopes up afterward. I couldn't understand what God's plan for me was.

Now, of course, I know what God's plan was. I went for an interview at the Dream Job. By this point, I'd been to so many interviews I was no longer nervous about answering tough questions like What I Felt My Weaknesses Were, and now knew better than to head into an interview without researching the company first. I could easily recite the well-worn stories about going above and beyond for a client, how my previous job experience was relevant to the current job posting, how I felt communication was my primary problem solver.

But my expectations? Lower than low. This company was too good, too professional. I'd been refused a job in a mailroom. Chapters hadn't even called me back, and they were retail! I'd speed-typed my way through seven different placement agencies with no results. It was obvious I would have to work temp work or for some small, one-room office operation or call centre.

The next day, I got a call from my mum while I was at a festival with my friend. The Dream Job wanted me to call them back. I dared to hope - just a little. Something to look forward to before the very nice regional manager gave me the inevitable "thought I'd let you know that unfortunately we've gone with another candidate" speech. I called them back.

I got the job. THE job. The dream job. The manager said, "I want you to know that you were the first candidate we interviewed, and you made it really difficult to interview anyone else. I wanted to hire you on the spot but I thought I would give it to the end of the day just to be fair, but I knew I couldn't hold another day of interviews. I was so impressed with your skills, your knowledge, your professionalism" -- by this point, over the phone, I was somewhat belying my sense of professionalism by happy-dancing.

In hindsight, I could see Big G's plan. All those interviews, all those months of polishing and waiting and trying, it was all meant to lead up to The Dream Interview. I needed those months of attempts so that by the time I had the Dream Interview, interviewing was so ingrained in me that I could show the best part of myself without being nervous. I had to go through the hell of being interviewed and passed over for crapshoot, poorly-paid jobs I didn't really want (except to pay the bills) in order to be ready to ace the interview for the job I really wanted.

So now I'm hired, and I just had my first day of work today. The office is full of a lot of great people and while there is a lot to learn (and I mean a lot), it's all work that I really like. It's a place where I can really build a career and make a lot of friends - it's definitely not the dead-end, pay-the-bills-until-I'm-published kind of deal I thought I'd eventually have to settle for.

So I'm really looking forward to working my ass off!
Posted by AnimeJune at Wednesday, August 25, 2010