Well, now that it was Thursday, it was time to actually work. I met KristieJ and Wendy and we had the breakfast buffet at the Fresh Mediterranean Market - where I finally was able to get my hands on some waffles! Delicious, delicious waffles.

For my part, I adjusted my conference badge to reflect my experiences so far at Orlando: 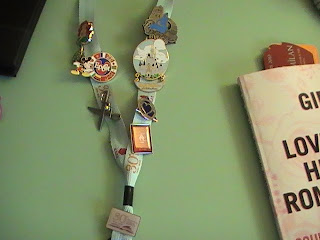 It's a common tradition at conferences to put pins on your lanyard - I have my RWA 2009 pin, my RWA 2010 pin, my FF&P (Paranormal chapter) pin, as well as one pin from each of the Disney parks I visited. Medals of honour for two blissfully exhausting days.

The first official conference function I attended was the keynote luncheon. I almost sat with Wendy, KristieJ and Rosie, but decided to set at a table nearby. Some of the best things about the conference are sitting with and meeting new people. Nora Roberts was the speaker, and I found it really inspiring. This year was the 30th anniversary of the conference, so Roberts' speech was basically a hilarious crackdown on whiners and wannabes who like to bitch that "it was so much easier to get published 30 years ago." Roberts, who's been writing since 1979, vented her thoughts on that opinion with one word: "Bullshit."

30 years ago, there was no Twitter, Facebook, or e-mail for promotions. No internet for research. No laptop computers - it was typewriters, carbon paper and white out. And now there are ebooks to widen the market. Nora Roberts did not, however, go into a "you whippersnappers have it so easy" speech - but states that writing and publishing is hard, and will always be hard, and that the only way to be published is to write and improve and submit. Whining about the times that used to be so "easy," or waiting on your butt until "things get better" will not get your book published.

Her speech also spoke about the great group of friends she made at RWA over the years, the real, lasting friendships between writers who live across oceans and countries but share the same love of writing. I think I'm going to have to read more of her books - which is good, since I got two for free on my seat at the luncheon! 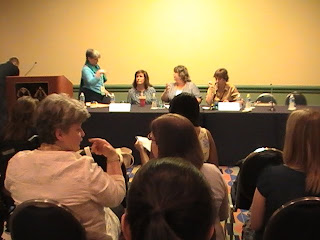 I am a pantser - I get an idea, I research, and then I write without planning anything. Claudia Dain is the same way. It was interesting to hear these authors talk about the real advantage and pitfalls of being a pantser, plotter, or somewhere in between. Dain (a pantser) talked about how it's especially difficult for pantsers to write a proposal or synopsis without finishing the book first - because we don't know how the book's going to turn out until we write it! Dain admitted that she managed to get away without writing a synopsis and no one's ever made her write one, but I know it won't always be that easy. Sabrina Jeffries (a dedicated plotter) says that plotting can make things easier, but sometimes it can take the joy out of writing. They also talked about how pantsers generally write character-driven stories and plotters generally write plot-driven stories.

As well, they talked about how their writing styles don't necessarily translate into their personal lives - pantser Dain's junk drawer is alphabetized, and Jeffries is very haphazard. What a cool workshop!

Next, I took the So You Think You Can Pace workshop, hosted by Laura Marie Altom, Margaret Daley, Michelle Grajkowski, and Winnie Griggs. 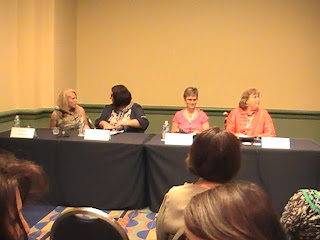 I've been told in feedback that my pacing needs work, so it was interesting to have certain aspects of it explained through the metaphor of different dances. As well, they talked about the different pacing expectations placed on different subgenres - for instance, romantic suspense novels are fast-paced, while historicals are slower paced.

After that came the Tiny Art of Elevator Pitches workshop by Carrie Lofty, which was hella helpful. Since I was pitching for the first time on Saturday, I thought it couldn't hurt to get some extra advice and feedback before the Big Day. Before the workshop, she asked if anyone wanted to write their pitches on cards and hand them up to the front. I'd actually brought my own on a card already so I handed it in.

For the first half hour, she talked about how much work it can take to create a good pitch, how many word changes it takes, how to choose words that you can say easily when presenting it to another person. She also told us how she sold What a Scoundrel Wants despite having an agent who arrived 4 minutes late into an 8-minute session by putting her pitch on her business card.

Then, she arranged the pitches that people had given her beforehand, and pulled one out. "I thought I'd read this one," she said. "Because this one really hit all the marks a pitch is supposed to make." She said that, at 60 words, it was a little long for a true "elevator pitch" (for when pitching to a poor trapped agent while riding an elevator), but for a face-to-face pitch session it did the job.

AND IT WAS MY PITCH SHE READ! She liked my pitch for Duke of Snow and Apples! Boy, was that a confidence boost! Yay!

After that, there were no more workshops for the day. I found myself alone again - most of my friends were either resting and staying in, or were invited out to things. Now, see, I'm used to being by myself, it's how I survived high school, but it also means that my ability to socialize developed more slowly than other people's. I try very hard to make up for it, but creating lasting friendships for me is very difficult - I'm a creature of habit, as well as an "out of sight out of mind" person, so I'm an inconstant correspondent, too. That means whenever I'm at a special event surrounded by other people who are like me, every minute where I'm by myself and not spending time trying to get to know other people feels like a failure. I know that's not true, but it's a difficult feeling to overcome.

So where else to drown my neuroses? DOWNTOWN DISNEY! I took the bus down to Downtown Disney - which doesn't require admission because it's not a park, but that doesn't mean there isn't stuff to do. It essentially has three sections: Disney Marketplace, Pleasure Island (hee hee), and Disney Westside. I arrived in time to watch the sunset - which, here close to the equator, means about 7 - 8 in the p.m. (sun sets at around 10:30 in the summer where I'm from). 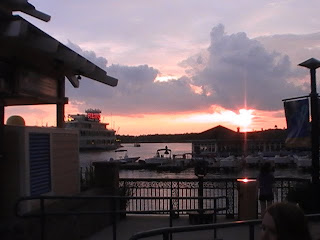 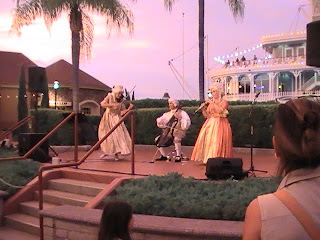 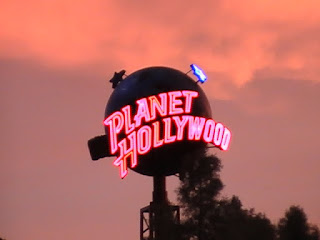 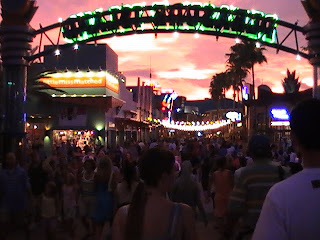 It's a great place to explore - lots of clubs, live music and restaurants. And STORES. Holy crap, the STORES. 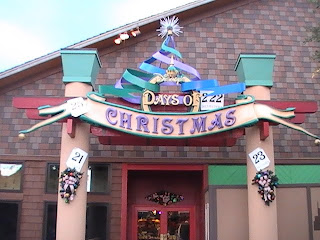 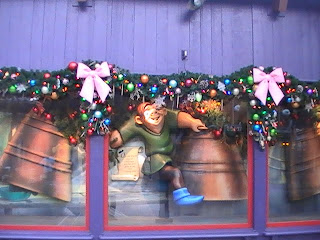 Yup - that's right. They have a store that sells Christmas-themed Disney merchandise ALL YEAR LONG. A merchandisegasm if I ever saw one.

They also had a place where you could create your own personalized t-shirts. I considered this - I love Beauty and the Beast and I'd love to wear something from that movie, but I'm not going to wear something childish (that sound you here is my parents laughing hysterically). Well, the folks at Disney will not let you print anything remotely snarky on those shirts. I tried to make a Belle shirt that said, "Seriously? You know I'm the one who can *read*, right?" but that got a no-no from the store employees. Sigh. So no shirt for me.

I stopped for dinner here, to satisfy my whimsical historical bent: 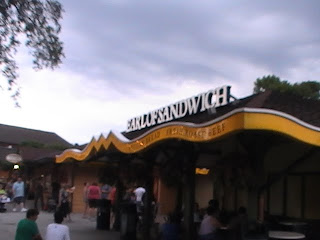 Their sign claims they have the "world's best hot sandwich," and I gotta say ... they came pretty darn close. I ordered something called the "Full Montague," with roast beef and turkey and it was seriously delish.

But let's not forget the CRAZY STORES. 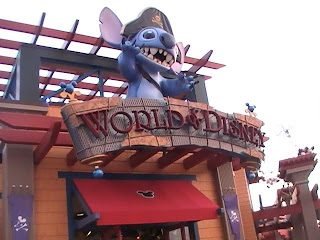 This is just one of the entrances to the World of Disney, reportedly the biggest Disney store in the world. And how much stuff in that store was Beauty and the Beast designed? Very, very little - all of it Belle, and all of it included in the general Princess Line. Oh, boo. BOO, Disney. It's only your most classic and critically claimed movie EVER. And, seriously, who puts THIS in the entrance to a TOY STORE? 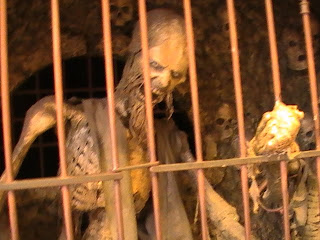 Yup, not kidding - they had moving, groaning skeletons right at the entrance and it scared one of the little kids half to death.

But Downtown Disney still had great things to look at - like the Characters in Flight balloon that takes people 400 feet up in the air. I was going to ride it, but sadly, they'd closed the ride thanks to a thunderstorm warning.

They also had live musicians, street performers, nightclubs, and a Lego exhibit: 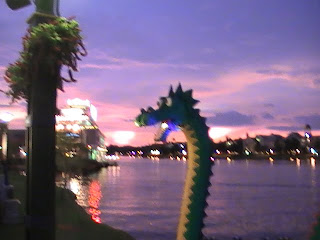 That's a sea-dragon made of Legos, and while you can't see it - it has coils that go into the water. Wow, that definitely took effort!

After that, I got tired and went back to the hotel in time to check out the Moonlight Madness Bazaar. After that, thinking there was nothing to do, I went to my room and changed into my PJs. It still felt like it was too early, that I was wasting precious time at a conference that's only a few days long in my room when I could be out making friends that will last for 30 years like Nora Roberts said.

So I actually changed back into my clothes and went down the lobby, and fell into conversation with Prism-nominee and FF&P chaptermate Jess Granger. She told me about some of the fun exhibits she'd seen at Epcot (apparently there's a place where kids can actually interact with Crush from Finding Nemo, with an actor manipulating an animated type of puppet, but it looks so seamless it's like the turtle is really there), and the super-intense Aerosmith-themed Rock'n'Rollercoaster at Hollywood Studios. It was really interesting, but even while my mind was like, Keep on Talking, Keeping Making Friends Before You End Up an Old Lonely Cat Lady, my body had pretty much hit the wall. I politely ended the conversation before I drifted off in the middle of it and went back to my room for realsies.
Posted by AnimeJune at Thursday, August 05, 2010