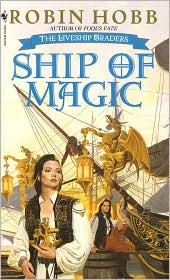 Althea Vestrit: When her sister inherits the family liveship Vivacia instead of her, she embarks on a quest to earn her ship back by any means necessary.

Wintrow Haven: Althea's nephew. Pulled out of the priesthood against his will and forced to work on the Vivacia by his brutish father Kyle. Bonds with Vivacia almost immediately but resents his loss of freedom.

Captain Kennit: Dashing pirate sociopath who wants to capture a liveship in order to become King of the Pirates.

Vivacia: Recently-quickened liveship, capable of seeing, feeling, and speaking. However, her fraught bond with Wintrow causes her to question her identity.

Brashen Trell: Former mate to Althea's father, and now out of a job. Worries about Althea's obsession with recovering Vivacia.

Amber: A mysterious woodcarver who seeks to befriend the lonely Paragon.

1 Sexy Dream In a Box

The Word: Spoiler alert, this book gets an A+. Seriously - Robin Hobb is one of my favourite authors of all time. ALL TIME. She was actually the first author I ever wrote to - and she responded and read my blog! She wrote three practically flawless fantasy trilogies, all relatively stand-alone, although if you read them in order you get some nice overlaps and one hella twist (hint: one character is in all three trilogies but you won't realize it until the third!).

Anyway, she was one of the defining female fantasy writers I read growing up, and her female characters were lush and developed - something I really noticed. The only other writer who even came close was Tanya Huff - and later, Kate Elliott (whose seven-book Crown of Stars series is a must read!). I also liked Tad Williams' Memory, Sorrow and Thorn trilogy, but his female characters? Crazy, silly, and insensible for the most part, although his later Otherland series does kick serious ass in the Awesome Ladies department.

Robin Hobb's first trilogy was The Farseer Trilogy, which seemed like a conventional medieval fantasy with psychic royals but had fantastic magic, worldbuilding, and a truly heart-breaking protagonist in the character of Fitz.

The first book in the following Liveship Trader Trilogy, Ship of Magic, introduces us to the concept of liveships - ships made of special wizardwood that, after three successive generations of family members work it, awaken into sentience and become cooperative, intelligent vessels capable of superior navigation, speed, and speech (through the figurehead, natch). While Trader families have to take on generations of debt in order to acquire one, once a ship quickens, its family's fortunes are virtually guaranteed.

Ephram Vestrit, a popular and well-respected Trader, is dying. While this is personally sorrowful news to his wife, Ronica, and daughters Keffria and Althea -- he's the third generation Vestrit to captain the family liveship Vivacia, which means his impending death also signals the impending quickening of the ship. To Ronica, a quickened liveship couldn't come at a better time - the Vestrit fortunes are dwindling dangerously with the onslaught of vulgar, money-hungry New Traders who are buying up Bingtown land and introducing the slave trade.

As for Althea, while devastated by her father's ill-health, she also sees the silver lining. Her loutish brother-in-law, Kyle, has captained the Vivacia since her father's decline, but once the ship is bequeathed to her, she'll set everything to rights. Having worked on the ship at her father's side since she was twelve, she knows everything about the Vivacia and looks forward to meeting her once she awakens.

However, things don't go as planned. Yes, Ephram dies, but, in a surprise move, he bequeaths the ship to meek, housewifely Keffria, instead - who obediently hands it over to her husband Kyle. Outraged and betrayed, Althea throws the mother of all shitfits, breaks ties with her family, and runs away - hatching a thousand different plans to get the Vivacia back, by fair means or foul. She doesn't give two shits about the law or her father's will - Vivacia is her ship.

However, even though legally Kyle owns Vivacia, the liveship still requires a blood Vestrit aboard her, particularly in her newly-quickened state. This is where Kyle's son Wintrow comes in, who is a Vestrit by way of his mother, Keffria. A quiet, contemplative, and religious boy, Wintrow's appalled when his father pulls him out of his monastery and forces him aboard Vivacia as a ship's boy. The priesthood is his life, he has no desire to be a sailor, and while he bonds with Vivacia almost instantly, he can't help but fight against the change in his circumstances and the loss of his freedom.

And along with all that, we also have the dashing pirate Captain Kennit, a ruthless and sinister rogue who, despite being motivated by the basest and most self-serving of intentions, becomes a righteous folk hero against slavery and oppression purely by accident. Acclaim is all well and good, but what Kennit really wants is a liveship of his very own, a prize that would guarantee him status as King of all Pirates. However, liveships are near impossible to catch...

What can I say about this series? The worldbuilding is exquisite - even the more down-to-earth elements like the Trader politics in Bingtown are colourful, exciting and fun to read about. Even when Robin Hobb has ships that can talk and gesture and gamble (one bawdy ship has a pair of oversized dice at hand), she never forgets the real aspects of sailing and she deftly portrays several aspects of shipboard life, across all sorts of ships (slavers, liveships, slaughterships, pirate ships, and merchant vessels).

But nothing beats those layered characters. If there's one prominent theme to be found in this novel, it's probably growing up. We start out with a lot of characters, and while some are immediately sympathetic, understandable or likeable, they are all pretty stupid or irresponsible or immature on some level and have a fair bit of development to accomplish before they come into their own - and not all of them have the chance to mature in ideal circumstances.

Althea is probably the most prominent character of the bunch - a confident Woman in a Man's Job whose dream is shot down by a misogynist idiot. However, as we read about her recovery from the betrayal and her desperate search for a legal loophole to get her ship back, we learn that a lot of what Kyle initially accuses her of at the start (i.e. of being a Spoiled Daddy's Girl instead of a Real Sailor) isn't entirely untrue.

When Althea disguises herself to try and win a ship's ticket (proof of employment) on another vessel, she discovers the work is a lot harder when her dad's not the captain. She can also be self-destructive and reckless, and drives former shipmate Brashen Trell near-insane trying to keep her from getting herself killed. Brashen, a disgraced and disinherited Trader's son before Althea's father hired him, is a nice foil as he watches out for her. He himself isn't the most responsible or far-thinking of young men, but he has to buck up pretty quickly to keep Althea's ass out of the fire. And sparks! So many sparks between them!

Wintrow's character arc is no less developed. Initially, he appears to be a pretty sensible, open-minded, and pious boy (he's 13 at the novel's start), but it's only once he's on a ship that we realize just how narrow and sheltered and naive his worldview is - but even as he learns about shades of grey, he also broadens and develops his religious tie with the world. His friendship with Vivacia is multifaceted and subtle - it's not a hate-love tie by any means. It's love-love, all the way, but neither Wintrow nor Vivacia know how to exist together and yet remain individuals, and the effects of their struggles as well as Captain Kyle's utter ignorance of the situation will have severe repercussions in future books.

Vivacia's character arc is especially interesting. In some ways, she's older than all the men aboard her, and possesses three generations worth of Vestrit sailing experience. At the same time, she's very much a child when it comes to personal experience. It's clear that every liveship keeps a close bond with its family, but Kyle's ignorance of custom, and Wintrow's unwillingness to be a sailor, cause Vivacia to develop differently, even independently of the Vestrit family - a dangerous notion. One of the novel's secondary characters, The Paragon, is a beached liveship driven mad, and the novel implies that this could be a possible fate for Vivacia if she's unable to form a true, wholehearted bond with someone.

I was initially worried about how well I might like this book - I hadn't re-read it for nigh on ten years. But within a few pages I was already sucked in, already experiencing the description and characters. If you haven't read Ship of Magic, I suggest you do. It's a classic.
A+
Posted by AnimeJune at Wednesday, August 11, 2010