Friday dawned bright and early, and I went down to eat the RWA-provided Continental breakfast, which for me involves fruit, tea, and begging the waiters to bring me cereal because they won't allow me to eat any of their pastries with my nut allergy.

My first workshop of the day was Parade of the Paranormal, by Shannon Delany, who gave us many interesting sources in which to search for unusual paranormal elements to put in your stories. I didn't really jive with her idea of trend-spotting, because it takes years between finishing a book and getting it to print, but otherwise, she gave us some good websites to look stuff up. I locked away the idea of psychic remote viewing, because my (planned) third book in my Dowagers series, Lady Toad, has a heroine who can do that - both to feed the scandal sheets and to spy.

Next up, the Avon and Harlequin booksignings! Whoohoo! 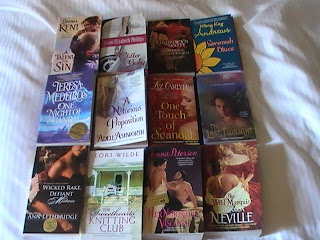 Out of all the booksignings (and I attended quite a few this year) I think I did the best at Avon and Harlequin. Although some of the books I received just thanks to dumb luck - the Liz Carlyle ARC and the Marjorie Liu were just left at the front of the room because neither author had been able to make the conference. I also broke my No Two Books By an Author I Haven't Read rule for the new Miranda Neville. Sorry! It just sounded so good!

Of course, being a doofus, I ended us missing the workshop Mining the Past by Joyce Moore. Oh well - I used the extra time to ship my first batch of books by flat-rate priority mail - a surprisingly cheap option ($14.50) that will unfortunately mean I'll have to wait a bit for my books to arrive.

After that, it was the Awards Luncheon, with speaker Jayne Ann Krentz, who did not look like her author photo at all, but otherwise gave a great speech about the many ways some authors will have to reinvent themselves if their books don't sell or their editors move away or the myriad other things that can happen to jeopardize a writer's career.

After the Awards Luncheon came probably one of the funniest and most helpful of the workshops I attended, Jo Davis' How to Tame the Man-Eating Synopsis. Jo Davis is a hoot. Her advice on how to write a synopsis was immensely useful, and not only that - she used her own work as examples. Let's just say that her synopses are so effective that I walked out of that workshop and into the book fair to see if I could buy her entire series of firemen romances (the answer: I could not - but I did find two at the library when I got back to Edmonton!).

I got out of that workshop just in time for the Berkley/Pocket Book signing! My loot: 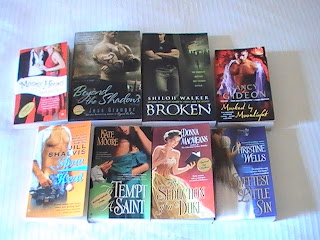 I'd had to miss the Berkley signing last year because of a competing workshop (plus I heard its organization last year had made them run out of books before half the line was over), but let me just say that lining up for Berkley first and going to Pocket second was a wise choice. I went through Berkley, picked up books, went next door to Pocket, and when I got out of Pocket there was still a line of people waiting to get into the Berkeley signing. I picked up Jess Granger's second book and finally decided to try some Shiloh Walker.

By that time, my feet hurt. They really hurt. I think running across Newark Airport/Magic Kingdom/Epcot/Hollywood Studios/Downtown Disney/and the Swan and Dolphin was starting to tell on them and I had to strap them into heels later that night for the Gathering - the RWA Fantasy, Futuristic and Paranormal Chapter's annual shindig. I decided to take a little me time and soaked them in some nice hot water - only later strapping them into my evil, evil heels for the Gathering. 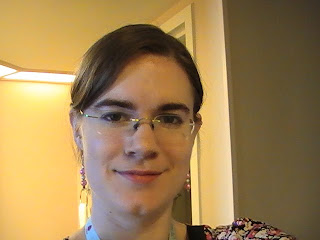 This is me all purdy'd up. I thought I'd add that to remind you I don't always look sweaty and exhausted in all of my RWA photos. I actually flip-flopped it over to the party, since it was actually in the Swan, the hotel directly across from ours. I'm sorry, but my heels have a limited window of comfortable wearability, and I wasn't going to waste it walking to the party. This year, the Gathering was actually a themed party, the theme being Steampunk. Back when RWA was scheduled to be in Nashville, our party was set to be on a steamboat, but even though that was no longer happening, that was no reason to abandon the steampunk theme! 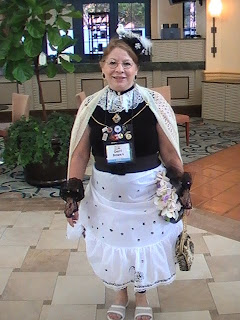 This was the year I'd actually started participating in my chapter now that I had a finished manuscript, and so I recognized a lot more names on the badges this year - such as Gerri Bowen, who faithfully critiqued the first nine chapters of The Duke of Snow and Apples. 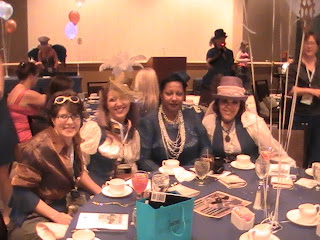 Did I mention how many fantabulous steampunk costumes there were at the Gathering? Wow! 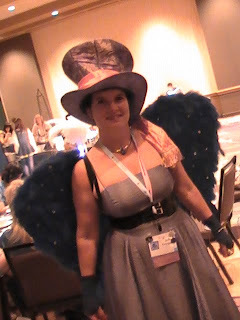 The party ended relatively early, however - it happened Friday night, when a lot of publishers hold their big parties so once the awards ceremony and the costume prizes were given out a lot of the pubbed authors scattered. I wandered off and ended up on a couch with Carrie Lofty and a woman I would only recognize as Ann Aguirre (pronounced with a hard G like Ah-Gee-Ray) the next day at a signing.

Still, all in all a good, productive day.
Posted by AnimeJune at Thursday, August 05, 2010