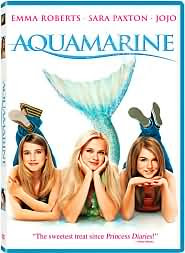 Okay, so I occasionally do film reviews on my blog, but it's not a regular thing. A movie really has to grab me, in order to inspire me to write a bunch of words on it.

Aquamarine grabbed me. But not in the good way. More like in the "I can't believe how creepy and unhealthy this movie is" way.

When I found a copy at my local branch of the library, I thought this could be a great waste of a few hours. Firstly, I like fantasy movies, and I like good teen romance films. Secondly, I adore adore ADORE Alice Hoffman, who wrote the novel upon which this film is based. I haven't actually gotten around to reading Aquamarine the book, but I think I still will - if only to see how the brilliant Hoffman actually intended the story to be like.

Aquamarine the movie, however, is essentially a story about two teenage stalkers, Claire (Emma Roberts) and Hailey (teen pop star JoJo), how they rescue a mermaid, and consequently learn absolutely nothing from the experience.

Claire is the "nerdy one," because she wears glasses and she's afraid to go in the water ever since her parents drowned. Hailey is the, er, "angry one" - although we don't really realize she's angry until later on in the movie because JoJo is good at singing but bad at making realistic people-faces.

They are also in love with the same guy - Raymond (Jake McDorman), a well-endowed surfer-dude lifeguard at Claire's grandparents' Florida beach resort.They've spent the summer stalking this poor oblivious boy, to the point where they've memorized his favourite colour, movie, song, as well as his physical mannerisms (he demonstrates his attraction to girls in a three-step process: 1) He fluffs his hair, 2) he stretches and 3) he flexes his muscles). But have they actually engaged him in physical or verbal contact? Nope.

Their love for him is jealousy free - because it's clear that neither girl is actually prepared to make an intentional move. I mean, there's a scene where Claire falls into a pool and nearly drowns until Raymond pulls her out, and all Hailey can squeal is, "You felt his biceps! If you'd gone under a little longer you could have had him give you mouth to mouth!"

But Hailey and Claire have even worse problems - it's the last week of summer, which means it's their last week together before Hailey's marine biologist mum takes her off to Australia, breaking up Hailey and Claire's BFF stalkerfest forever, as each is (so not surprisingly) the other's only friend. Oh noez!

Possible salvation arrives in the form of Aquamarine (the energetic Sarah Paxton), a mermaid who washes up in one of the resort's pools after a storm. Aquamarine is on the run from her dad, the King of the Sea, who wants to rope her into an arranged marriage. Aquamarine refuses the marriage because, unlike her father, she believes love exists and she's got three days to prove it before Daddy Dearest pulls her back into the sea to swim down the aisle.

Aquamarine uses her magic to give herself feet, and only takes a few steps before spotting Raymond and deciding that he is the one she's going to find love with. Cue more horrified screams from the Restraining Order Twins. Actually, if you're in the middle of the movie right now, you can make it more bearable by playing the Aquamarine Drinking Game:

Take a chug whenever
After much soul-searching, the two members of the Tattooing Raymond's Name On Our Asses Club choose chicks over dicks, graciously deciding to help Aquamarine win the man of their dreams in order to keep Hailey from being dragged off to another continent.

The film descends even deeper into creepyville once the BFFs decided to give the naive mermaid lessons on how to get boys - which is pretty much like getting racial sensitivity training from Mel Gibson. Yes, Aquamarine, let the isolated, shut-in weirdo girls teach you everything about things they've never even experienced!

And their advice is some of the most ridiculous I've ever heard. First, a tiresome montage where Aquamarine is forced to read millions of girly magazines like Seventeen and CosmoTeen, full of helpful advice Hailey and Claire have faithfully absorbed but never used. Then, they teach her all sorts of "perfectly normal," "flirty" behaviour - such as repeatedly calling Raymond only to hang up when he picks up the phone, "coincidentally" cycling past his house several times a day, and scrapbooking pieces of his hair (only, I'm making up that last part - but only that last part).

So can you guess what I hated most? Yes, that's right - the "protagonists." More useless, poorly written, and passive heroines I have never met. These girls never do anything for themselves. They're supposed to be the heroines of this movie, but once Aquamarine arrives, they're reduced to the comic relief sidekicks and follow Aquamarine on her adventures, spying and squealing with delight. Instead of taking action and changing their circumstances for good or ill, they essentially become spectators in their own story, living vicariously through the one decent character who actually has the balls to do something about her life.

They are doormats. They've been in love with this one guy for years, but spend most of their time staring at him from a distance and bitching about the girls who actually talk to him, muttering to themselves, "Raymond's too smart to fall for that type of girl." I'm sorry, but I'm pretty sure even MENSA candidates would prefer women who approach and talk to them than the girls who give them no indication of their existence. Moreover, Hailey and Claire have loved Raymond - and only Raymond - for all of puberty, but they just sit back and calmly watch as Aquamarine takes everything they've ever dreamed of but never bothered to try for.

What's more? They're stupid. The climax of this movie is one big, giant TSTL. Aquamarine gets pushed into the water by bitchface Cecilia. Falling into the sea not only reveals her tail, but alerts her dad who summons a giant hurricane to drag her back to his kingdom. Despite all her struggling, Aquamarine can't get away - so our two shortbus shawties jump into the water to save her. Let me break the stupidity down into manageable pieces:

1. Two human girls (one of whom hasn't gone near water in years ever since her parents drowned),

2. jump into the sea in the middle of a hurricane,

3. to save a mermaid, someone genetically equipped to swim and breathe underwater.

There is literally nothing these girls can do in the water if a freakin' mermaid can't do them, and yet this spectacular feat of brain-damaged reasoning counts as such a wonderful expression of love that the King of the Sea is forced to admit it exists and allow Aquamarine to go her own way.

But worse than all of that is this - Hailey and Claire learn nothing from the experience. You'd think these two desperate, lonely, cat-ladies-in-waiting would learn something about gumption once a hot, bubbly, confident sea creature splashes in and gets not only her man (even after he learns she has a tail!), but freedom from under her father's thumb.

Like, maybe Hailey and Claire could start looking at other boys, and actually talk to them, or stop reading Tiger Beat mumbojumbo about dating to actually date. Or just stop screaming Raymond's name like some shrill power mantra. But nooooooo - in one of the last scenes of the movie, after a besotted Raymond offers to meet Aquamarine in Fiji during his gap year, he confronts Hailey and Claire to thank them for hooking him up with Aquamarine and pecks them both on the cheek.

Our jellyfish heroines dissolve into grateful shrieks and giggles - OMG! Raymond paid attention to us! He kissed us on the cheek! - like a pair of yapping lap dogs overjoyed to receive the pathetic leavings of Raymond's affection for Aquamarine.

GET A LIFE, YOU IDIOT MORONS! GET SOME FUCKING SELF RESPECT!

GAH! I mean, seriously. Okay, okay, they change a little - Claire loses her fear of the sea (I guess jumping into a maelstrom will do that to you?), and Hailey decides not to use their wish for them to stay together because she knows marine biology is her mother's dream. Besides, what with Facebook and MySpace and Twitter, there are so many more opportunities to monitor every new development of Raymond's sexual history even from as far away as Australia.

Aquamarine: It reminded me of a reverse Twilight, but with mermaids, where two unhealthily obsessed girls stalk the innocent, gorgeous boy to the detriment of their social development and yet no one sees anything wrong with that (in fact, Claire's grandparents gently tease her for it). The story is bad, the dialogue is horrendous (especially since half of it's composed of incoherent screeching), and the acting is terrible (particularly on JoJo's part).

The only bright spots in this movie are the talented Jake McDorman as Raymond and Sarah Paxton as Aquamarine. The development of their relationship is refreshingly normal - despite Hailey and Claire's concerted efforts to "train her," Aquamarine remains "kooky" - which in this movie means going up to the person she likes and telling him so right away. Oh Aquamarine, you'll never learn, Claire and Hailey despair. You haven't even figured out his Social Security number yet!
C-
Posted by AnimeJune at Friday, August 06, 2010