"A Precious Jewel," by Mary Balogh 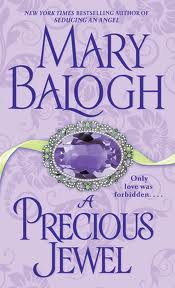 The Chick: Priscilla "Priss" Wentworth. When the deaths of her father and brother left her destitute, she fled to her old governess' finishing school only to discover it was a brothel. Nevertheless, she made do.
The Rub: When she's hired as the mistress to Sir Gerald, she runs the risk of breaking the number one rule of prostitutes: falling in love.
Dream Casting: Ginnifer Goodwin.


The Dude: Sir Gerald Stapleton. Multiple betrayals in his youth convinced him that entanglements with women can only end in tragedy. Nevertheless, when his favourite prostitute is abused by another client, he feels compelled to make her his mistress
The Rub: The longer he stays with her, the less he can do without her - but what if she rejects him like all the others have?
Dream Casting: Tom Hiddleston.

Gerald: I like Priss, but she's slightly bruised. Let's make her my mistress!

Gerald: Tend my needs! Do as I say! No backtalk!

Priss: Would you like some hot towels with that?

Gerald: WOULD I! I mean, no! NO! Commitments! Ew! Gross! Unclean!

Priss: So no hot towels?

Gerald: ... maybe one. But I'll enjoy it contemptuously!

Priss: Whatever you think is best!

Priss: Oh crap, I'm pregnant! I must leave after spinning an unlikely tale!

Gerald: But who'll take care of me when I have a cold? Who'll rub my tummy when I have gas? *gasp!* I must be in love! Marry me!

Romance Convention Checklist:
The Word: I love Mary Balogh, she's one of my favourite authors and her books have always been consistently entertaining. Because of that, I'm willing to cut her a lot of slack when she uses tropes that would normally get my hackles up.

Hence, my interesting reaction to A Precious Jewel. Sir Gerald Stapleton, the novel's hero, is an open misogynist. Thanks to two (!) mother figures who Did Him Wrong, he's firmly convinced that love is beyond the emotional capability of women (and, to be fair, most men). He has scrupulously avoided commitments and entanglements, knowing they will inevitably end with the woman's betrayal. He refuses to even keep a mistress, preferring to frequent Miss Blythe's Finishing School, an exceedingly genteel and discriminating brothel.

If this were any other author, I'd already be side-eying this novel and checking for the perfect angle at which to throw it at my wall. However, this is Mary Balogh, so I figure she's got a few more tricks up her sleeve.

When he goes to his favourite brothel and discovers his Usual is out sick, he accepts a substitute - a genial, pliant, and cheerfully obedient whore named Priss. Pleased with her ability to submit to his particular tastes, he chooses her for all of his next appointments. After two months, he arrives to find a shaken Priss sporting a nasty bruise on her jaw - an ugly souvenir left by a previous client. On impulse, he buys out her contract and offers her a position as his mistress, and this is where things go awry.

Although Miss Blythe runs a pretty tight ship, Priscilla is delighted at the prospect of becoming Sir Gerald's mistress. She harbours no illusions about the respectability of the position, but she knows Gerald to be young, handsome, courteous, and gentle, and she genuinely likes his company.

Both of the protagonists in this book are pretty unconventional as far as historical romances go, although I felt this unconventionality worked both for and against my enjoyment of the novel. Gerald is an interesting character - but a difficult one to like, at first. He's autocratic, selfish, and oblivious for much of the novel. Priss is also a completely passive heroine. She is just so completely selfless and giving, even on the numerous occasions when Gerald's commitmentphobia causes him to act like a complete turd. I wound up feeling incredibly frustrated with both of them.

However, they are both so interesting and well developed, and their romance works in such a subtle and clever way. In a departure from the vast majority of six-packed genius heroes who abound in historical romances, Gerald is of average looks and average intelligence, and he's painfully aware of how unremarkable he is. This feeds his misogynist fear of commitment - he's so certain that no woman is capable of remaining faithful to him, but part of that is because he believes he truly has nothing to offer a woman.

Priss is, yes, an incredibly passive character, perpetually asking "How may I give you pleasure?" even when her heart is breaking, even when Gerald is being an ass. She cares for and tends to Gerald in a myriad of ways, nursing him through illness, easing his angst-hangovers, and all without a word of complaint. However, Priss' character is founded on endurance, practicality, and making the most of small pleasures - enduring poverty with a smile, enduring the brothel and her daily customers. Her quiet character development occurs when she progresses from tending to Gerald by night and seeking her private pleasures by day, to discovering tending to Gerald has become a private pleasure, and an increasingly important one.

The progression of their relationship is almost a tragicomedy of errors, as Gerald keeps screwing up, underestimating Priss, and treating her callously in an attempt to distance himself before he forms an unwanted attachment - and yet Priss keeps welcoming him at the door, regardless of the hour, asking him how she can give him pleasure. Gerald spends the novel putting up barrier after barrier - only for Priss to slowly and inexorably wear them down until Gerald winds up more deeply entangled than ever.

Did I wholly enjoy this novel? Not entirely. Gerald is a grade-A Asshole several times in this novel (although he's never violent or abusive, and he comes around at the end in a sweet way) and sometimes I wish it was more obvious what Priss saw in him. However, the storytelling is so layered and clever, and the characters so wholly original, human and practical that the very novelty of that in a romance was a treat in itself.

A Precious Jewel is a fascinating and unorthodox romantic read.

You can purchase A Precious Jewel here.