So, I went a couple of weeks without a Wanting, for various reasons including Laziness, Business, and Tiredness. Also sadness.

Gave up on my novel this week. Not forever. Just - until I get a better idea so I can start cannibalizing all the good stuff from it into the new one. I just realized I didn't have a very good idea to start with - more like a general theme? I wrote 50,000 words in it thinking the more I wrote the better it would get, but when I actually tried to describe the book to other people who hadn't spent that last several months chugging away at it, I realized it really wasn't going anywhere.

So I'm taking a break from that - but I may be continuing with my Cinderella re-telling. Stronger plot, but now I will actually try some loose plotting instead of just going in half-cocked. 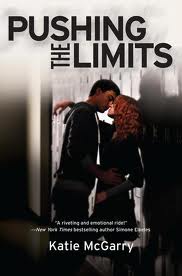 Pushing the Limits, by Katie McGarry

Genre: YA, Contemporary
Cover Snark: Hell to the no with the PDA, yo
The Story: A girl with mysterious scars and a secret past hooks up with a troubled teen with a dark past.
Why I Want It: Well, for the first few months since the marketing blitz for this book began and reviews starting showing up on the blogs, I really didn't want this book, and I couldn't skim through and ignore reviews about it fast enough. It was one part Lame-Ass Vague Cliche Title and one part Lame-Ass Boring Cover and two parts 400 Pages of Stone Cold Bummer Teen Angst Plus Amnesia.
But then it was reviewed (positively!) by Dear Author and the Smart Bitches chose it for their book club. Can't really argue with endorsements like that. So if I get my hands on a library copy, I'll give it a try. I do like stories that have darkness - I just don't like stories that seem to exploit it for drama or just to be relentlessly depressing.

Genre: Fantasy, Contemporary (ish?)
Cover Snark: I might casually suggest the Libriomancer start visiting the Personal Hygieniomancer a little more often.
The Story: Our hero is one of a group of people who can pull creatures, people, and objects into the real world from popular fantasy literature. There's also a plot where he does things but really it's the first sentence that's important!
Why I Want It: DUDE. It's Last Action Hero with BOOKS. DON'T QUESTION IT.

And that's it for me! How about you?