"The Cellist of Sarajevo," by Steven Galloway 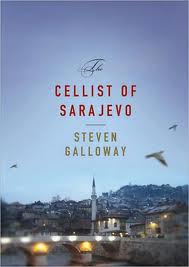 The Cellist: A musician who decides to defy the enemy forces attacking his city by playing music on the site of a horrific bombing.


Arrow: A female sniper tasked with protecting the cellist from an enemy sniper sent to silence his music and his message.

Keenan: A husband and father who must journey across his wartorn city to get fresh water for his family.

Dragan: A baker on his way to get food who find himself trapped at an intersection by sniper fire.

The Word: This is going to be a difficult book to review.

I usually don't pick up books like this. I go for particular stories. I prefer happy endings, but can also tolerate hopeful endings and even angstily tragic ones (so long as they don't involve Heathcliff). I tend to gravitate towards light stories - or very dark ones that against all odds ends up in the light. In this case, I read this book because a coworker of mine chose it as this month's book club selection, after revealing that she and her family had escaped from Bosnia in the early '90s.

The novel is set during the Siege of Sarajevo, right after a mortar destroys a marketplace, killing 22 people who were lined up for bread. A cellist (an unnamed fictionalized version of Vedran Smailović, a real-life musician whose bravery inspired the novel) takes his cello and decides to play his instrument at ground zero at four o'clock each day, every day, for 22 days - one for every victim. His stark courage inspires the people around him and serves as a catalyst for the three characters whose interwoven stories we read.

The main story is Arrow's, a talented female sniper who is ordered by her commanding officer to protect the cellist. Hers is a character shaped by war and a burning hatred for the men on the hills who send bombs and shells and sniper fire into the city. However, her careful calculations of how the enemy sniper will proceed go awry in a manner that forces her to remember her basic humanity, as well as her motivation for becoming a sniper in the first place.

As well, we read about Keenan, a husband and father who has to travel miles across the city every four days to collect fresh water for his family, risking bombs and sniper fire. However, even as he considers himself a coward, even as he encounters unspeakable tragedy, he is still capable of making selfless choices and preserving his innate decency even in the face of horrors.

Finally, we read about Dragan, a baker on his way to a guaranteed meal who is halted in his tracks by a sniper-guarded intersection. Trying to decide whether or not he can risk a crossing, he runs into an old friend who stubbornly insists on hoping against hope that things will get better.

The unifying theme in all four storylines is that true loss does not come when buildings are destroyed or people are killed - true loss occurs when the stress of warfare causes people to forsake their common humanity, decency and identity. All four characters mourn the loss of the Sarajevo that they knew - a Sarajevo represented by the streets that were bombed, the Opera House that was destroyed, the libraries and banks and schools that were shelled into oblivion. And yet they also represent how the city has survived, with their own small victories of perseverance, hope, and selflessness.

Did this book entertain me? No. It's an incredibly depressing novel, and it's intended to be. This book is full of people who have to check both ways before crossing the street - to make sure they don't get taken out by a random sniper. Where running water is scarce and electricity scarcer still. Where the temptation to turn into as indiscriminate a killer as the enemy you're fighting is deceptively strong.

No, this wasn't a fun book. And it's not one I can easily give a letter grade to because I don't know how to judge it. While well-written, it was also tedious, depressing and repetitive. But perhaps that was the point - because living in an oppressed city under siege can feel that way. Or perhaps that is just how I read it. I will definitely remember this book - but I don't think I'll ever willingly reread it or read something similar to it, at least for a good long while.

That being said, it did make me think, and it actually made me go out and look up the Siege of Sarajevo, the Bosnian War for Independence, and the genocides that resulted from it - an area of history I had only been vaguely aware of before. So as a book that expands awareness while at the same time propagating a common (if commonly overlooked) message, The Cellist of Sarajevo succeeds.
B

You can purchase The Cellist of Sarajevo here.