"Ravishing in Red," by Madeline Hunter - the 100-Page Drop 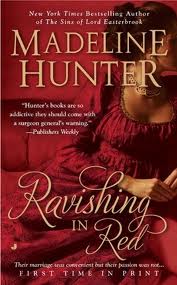 I'm losing patience with a certain type of romance.

I like to call this, the "Baby's Day Out" romance.

In the "Baby's Day Out" romance, we have a screaming twit of a heroine who is described or defined by the following characteristics:
All of these traits are usually swept under the "Innocence" rug - she's just so pure! So untainted by the ghastly, cynical common sense and self-awareness of the real world! Or, if this romance is a contemporary, she's just "quirky" and "full of gumption."

In the "Baby's Day Out" romance, our innocent marshmallow duckling heroine is possessed by a passionate desire to solve a crime or right a wrong, which she goes about in a typically nonsensical, poorly-planned way that almost always lands her in danger. The Rational, Damaged Hero spends the novel tearing his hair out and desperately chasing after her to keep her from jumping off a cliff.

And in the process she accidentally solves the crime while at the same time her Sweet Maidenly Yet Passionate Virtue pulls the Rational, Damaged Hero back from the brink of Angstville.

That's essentially what I got from the first 100 pages of Ravishing In Red. The heroine, whose name has about six letters it does not need (Audrianna Kelmsleigh), starts the novel in a dark hotel room, unaccompanied, lying in wait for a shady man she's never met (nicknamed The Domino) who left a shadier notice in the Times about information that might help clear her father's name of the scandal that drove him to suicide.

Oh, and she also hasn't told any of her family or friends where she is, but that's okay, she brought a loaded pistol she stole from her BFF.

And that's when our hero (Lord Sebastian) shows up, looking for the same shady man he's never met. Lord Sebastian helped prosecute the case against Audrianna's father, the man whose alleged negligence sent faulty gunpowder to the front and doomed a platoon of English soldiers. Only Lord Sebastian is convinced it wasn't negligence, but a greater conspiracy.

Naturally when he arrives there's a case of Mistaken Identity, but not on Sebastian's part because it's pretty clear to him that Audrianna is about as sharp as a bowling ball dipped in marshmallow fluff.
The same Audrianna who cocks the hammer on the gun she has no idea how to use in order to look more threatening.

Thankfully, Audrianna is one of those irritating heroines who comes with an "Off" switch - her Erogenous Zones. Because she's just so pure and innocent that the most basic of sexual activities sends her into deep mental shock, she is quickly disarmed by an experienced kiss from Sebastian - until the real Domino shows up, Audrianna drops the gun, and accidentally shoots Sebastian in the arm. The gunshot brings all the boys to the yard and Audrianna is promptly compromised.

Audrianna flees to her cousin's Boarding House for Sequel-Baiting Heroines while Sebastian seeks advice from his Family of Angst and Sad Childhoods (crippled war hero brother? Check! Evil image-obsessed mum? Check!). Slowly Sebastian realizes he needs to offer marriage to save both their reputations - only Audrianna bullishly and selfishly refuses because she wants to make Sebastian look bad.

And this is where I tapped out.

I skimmed ahead, however - and was kind of surprised. The rest of the story gets kind of interesting. One of Audrianna's friends has a legitimate capital-S Secret and everyone (including the hero) demands she terminate their friendship, which leads to intriguing conflict. The mystery actually has a decent outcome. Some good drama. The heroine matures.

However, I don't regret DNF'ing it. Life is short. A novel has to start the way it means to go on and those first 100 pages were pretty awful. I shouldn't have to slog through a quarter of the book before it gets good.