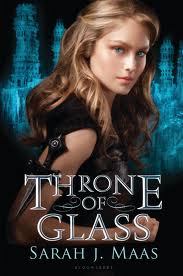 I first became aware of this book through other bloggers, and then later at Book Expo America where it was hyped up and down the Javitz Center. Upon meeting the author herself at the Apocalypsies' party, she piqued my interest when she described her debut novel as a retelling of Cinderella, one where Cinderella is an assassin sent to the ball to kill the prince.

I love fairy tale retellings and I love epic fantasies with warrior heroines (I credit a timely introduction to Tamora Pierce in my teens for that one), but unfortunately, Throne of Glass strained my credibility to the point where I had to subject it to the 100 Page Drop (i.e. read the first 100 pages and if nothing's improved by then, junk it).

Our heroine, Celaena Sardothien, isn't just a good assassin - she's the World's Greatest Assassin. Before she could get around to making it official and buying the coffee mug, she was captured at seventeen and imprisoned in a death camp for a year. Unexpectedly, she is dragged from the salt mines and brought before none other than Dorian, the Crown Prince of Adarlan, who offers her a deal.

Now, Dorian's dad is Obviously Evil - take-over-the-world, burn-all-the-magic-books Evil. But Celaena's other option is staying in the salt mine death camp. And, I mean, c'mon - salt mines. So dehydrating. So bad for the skin. So Celaena accepts and is transported to the King's palace to train in the competition against a ragtag gaggle of criminals, mercenaries, thieves, assassins and sociopaths.

Now this would all be lovely drama gravy, but nothing in the first 100 pages of this novel made any sense. First of all, I found Celaena's character entirely implausible. We're told that she's an assassin - the world's BEST assassin! - and yet nothing about her worldview, her actions, or her behaviour fits this description. She spent a year of torture in a death camp and not three days later she's whining about the agony of wet shoes. We're told she was So Good at Secretly Assassinating People that only a select few know who she really is, and yet she whines and pouts that she has to hide her true skills during the competition to protect her identity - because she wants more attention.

What we're told about Celaena is completely different from what we're shown. We're told that Celaena killed twenty-three people with her bare hands and a pick axe during her one escape attempt from the death camp, and yet all I see is a whiny, childish, shortsighted, boastful heroine who still manages to be somewhat "innocent." When you tell me that a character has been killing people for money since they were eight years old, to the point of becoming the best at it, to the point of being thrown into a torture-jail for it - I get certain expectations of what that character should be like, and Celaena doesn't meet any of those. She reads more like a plucky, naive thief caught stealing a necklace from some rich lady's purse than a mass murderer who endured torture and slavery.

Moreover, the novel's plot seemed contrived and nonsensical to me. Why throw a complicated, expensive competition to choose your Champion? Why choose from among a group of thieves, mercenaries, and murderers instead of loyal knights and soldiers? Why host the competition and house these thieves, mercenaries and murderers in your own castle? And if you're the World's Best Assassin who's been brought out of a death camp and given weapons, why don't you cut a bloody path to freedom instead of staying to serve the man personally responsible for destroying your home country?

Skimming ahead did not resolve any of my problems with the story. We find out that Celaena loves candy, books and pretty dresses and hates the idea of puppies dying. Dorian and Chaol angst about how incongruously adorable and lovable the World's Best Assassin is and discreetly argue about who'll get to kiss her underneath the Fantasy Mistletoe Equivalent during their Fantasy Christmas Equivalent. Someone's butchering the competitors and stealing their organs. Magical ghosts factor in somewhere. Saving the World becomes a top priority, which only Celaena can do, etc. etc. drop it into Mount Doom, rinse and repeat.

Fantasy novels are supposed to make you believe in the unbelievable. Sadly, I found my sense of disbelief couldn't remain airborne with Throne of Glass - at least for longer than 100 pages.
DNF

Disagree? Still curious? You can purchase Throne of Glass here.