"The Girl Who Fell Beneath Fairyland and Led the Revels There," by Cathrynne M. Valente 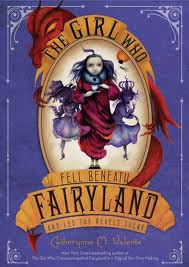 The Protagonist: September. A year after she saved Fairyland, she's more than ready to escape Nebraska and the stress of the war and go back - so when she sees a magical boat flying across the prairies, she seizes her chance.
Her Angst: Fairyland is slowly losing its magic thanks to Halloween, the shadow September gave up in the previous book, who is kidnapping shadows to live in her kingdom. Can September really go to war with someone who is essentially her other half?

Halloween, a.k.a. the Hollow Queen: September's shadow, who has decided that being free and independent is far better than being some passive lightless doormat - and now she wants all the other shadows in Fairyland to feel the same.

The Alleyman: Halloween's invisible henchman who steals the shadows from the people in Fairyland-Above and brings them down into Halloween's kingdom.

Angst Checklist:
The Word: In the previous book, The Girl Who Circumnavigated Fairyland in a Ship of Her Own Making, our heartless heroine September saved Fairyland by defeating the evil Marquess hell-bent on destroying it. During her adventures, however, she was forced to relinquish her shadow in order to save a young Pooka.

In the much-anticipated sequel, September has been waiting a whole year in Nebraska, washing pink and yellow tea cups, reading with her mother, listening for news of her father on the radio - and looking out across the horizon for the Green Wind to take her back to Fairyland. When she spies two magical figures speeding across the prairies on an inconceivable boat, she chases after them, trips, and lands back in Fairyland, a few years after her last heroic exploits.

But all is not well in Fairyland - and September is partially to blame. As it turns out, the shadow she parted with (who has since named herself Halloween) has declared herself Queen of Fairyland-Below and has started kidnapping the shadows of Fairyland's other inhabitants with the help of a terrifying, invisible figure named the Alleyman. The loss of shadows means the loss of magic in Fairyland-Above (where they now use Magic Ration Cards not unlike the food ration cards September's family uses), and September knows she has to fix this. So off on another adventure she goes!

Similar to the last book, September's travels take her on a linear path through some spectacularly imaginative examples of worldbuilding and wordplay, as she meets characters both new (such as the hysterical Duke of Teatime and his wife, the Vicereine of Coffee), old (Gleam, September's faithful talking lamp), and sort-of-old (A-Through-L's and Saturday's shadows, kidnapped by Halloween).

The concept of shadows is the novel's unifying plotline and it's fantastically developed. As September discovers, shadows have their own unique personalities, derived from the feelings and traits their casters suppress in themselves. Halloween, for example, is a less-inhibited and less responsible version of September, Saturday's shadow is far more impulsive and outgoing than the real thing (often to an alarming degree), while Ell's shadow is more timid. However, something all the separated shadows have in common is the desire to be free to live their own lives and adventures. If September finally finds a way to restore Fairyland to rights, will she be able to condemn them all to passive enslavement once again?

What I especially enjoyed about this installment of the series is that even amid all the magic and whimsy (quite a lot of whimsy - if your tolerance for tomfoolery is low, this book will exhaust you one chapter in), Cathrynne M. Valente still manages to explore and develop the character of September in a realistic and understandable way. She is no longer a heartless child - now thirteen and on the threshold of adolescence, September finds herself torn between her childish habits and her newer, stranger urges of maturity. Her greater capacity for empathy influences her to make certain choices that the September of a year ago would not have made.

The Girl Who Fell Beneath Fairyland is an endlessly inventive and creative novel - but it's definitely not a quick read. It's the type of book written for those who love language as much as they love story. If you're the type of reader who reads for fast-moving plots and doesn't care one way or the other about word play or imaginative semantics, you might find Fairyland's pacing slow and frustratingly cluttered. However, if you're like me, and you love language and poetry and clever phrasing, you'll find the novel a double treat.
A

You can purchase The Girl Who Fell Beneath Fairyland and Led the Revels There HERE.