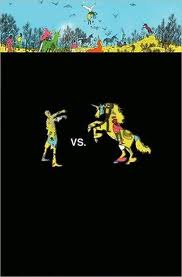 The eternal question - zombies or unicorns.

Actually, it's not so much an eternal question as one that can be answered fairly quickly - unicorns.

But I'd received a number of suggestions to read this anthology after I read both a zombie and a unicorn romance, only for both to suck various decaying/sparkly nether regions.

The anthology is edited by Holly Black (team unicorn) and Justine Larbalestier (team zombie) and was built on the premise of WELL WHY THE HELL NOT? They then proceeded to rope in a flock of supremely talented YA authors to contribute interesting stories for one or the other supernatural creature (and in one case, both).

My reactions are as follows:

"The Highest Justice," by Garth Nix (a.k.a. "The One With Both a Unicorn and a Zombie In It")
The Plot: A princess calls upon the legendary unicorn protector of her kingdom to avenge the murder of her mother, with unpredictable results.
The Word: This was a nice enough entry into the anthology - well-written, with a genuine creep factor (the zombified remains of the princess' mother factor into the revenge). However, it seemed a little too low-conflict for me, as the unicorn promptly and quickly solves all the princess' problems as they arise, with little to no effort required on the princess' part. B

"Love Will Tear Us Apart," by Alaya Dawn Johnson (a.k.a. "The One with the Gay Indierock Zombie")
The Plot: A high-functioning zombie teenager falls in love with a troubled zombie hunter with similar taste in music - but will the Eaten People in his past destroy their budding relationship before it even begins?
The Word: This was a fantastic story - firstly, because we get a zombie's point of view. Secondly, because thanks to a well-developed premise, our zombie is still capable of cutting and hilarious commentary (even if the virus ate away the part of his brain that tells him killing people is wrong). The story is tense and enjoyable, even if the violence at the end seemed a shade too over-the-top. A

"Purity Test," by Naomi Novik (a.k.a. "The One With the Unicorns In Manhattan")
The Plot: A homeless teenage girl in New York City is recruited by an unprepared unicorn to help him save a herd of baby unicorns captured by an evil wizard.
The Word: I loves me some Naomi Novik, and I never even knew she wrote YA! This story is pretty fluffy, but it's saved by the practical human heroine and her hilarious dialogue with Belcazar, the unicorn who wouldn't know a virgin if it bit him on the butt. A witty send-up of fantasy tropes set in modern Manhattan. B+

"Bougainvillea," by Carrie Ryan (a.k.a. "The One with the Zombie Pirates")
The Plot: In a world destroyed by zombies, our heroine is the daughter of a governor who's managed to keep their tropical island self-sufficient and zombie-free thanks to his strict rule - but at what price?
The Word: I've never read Carrie Ryan before - I skimmed over glowing reviews of her books (like The Forest of Hands and Teeth) because I was never that interested in zombie stories. I'm not a big fan of horror or dystopias - I'll read them, but I've never been interested enough to seek them out. I might have to change that - "Bougainvillea" is one of the best stories in this collection, a subtle, complex, layered tale that flashes back and forth in time as our heroine, Iza, reflects on how her father's quick-thinking reaction to the zombie apocalypse saved a number of lives - but also irreparably damaged his family and changed him into a man she no longer recognizes. A+

"A Thousand Flowers," by Margo Lanagan (a.k.a. "The Unicorn Story That Redefines the Definition of Horny")
The Plot: A hapless young man finds a unicorn in the woods who leads him to the unconscious body of a ravished princess, and he's then blamed for her rape. Later, the princess's midwife/jailer realizes the case wasn't as cut-and-dry as it seemed.
The Word: This story totally sucked me in with its gorgeous, poetical language and beautifully weird plot (as Lanagan demonstrated in the short story "Singing My Sister Down," she's aces at Gorgeous Language and the Beautifully Weird). The plot twist is fairly obvious (and also totally spoiled in the editors' foreword), but the story is clearly meant to be enjoyed for its marvellous description and uncanny, magical setting. A gem. A+

"The Children of the Revolution," by Maureen Johnson. (a.k.a. "The One with the ZomBabies")
The Plot: A stranded American teenager in Britain is hired by a Famous Unnamed Celebrity to babysit her flock of adopted children for a night, provided she abides by very specific childrearing instructions. Ha, that'll work.
The Word: Maureen Johnson is an author I'm more familiar with from Twitter than from reading her books, so I was eager to try this one. Ignore the fact that it uses the age-old Protagonist is Doomed By Defying Basic Instructions plot - "Children'''s real charm comes from the zany humour and sharp satire of celebrity eccentricity - where this time, a celebrity's gonzo cult religion and odd life choices have terrifying, and terrifyingly funny, connotations. A

"The Care and Feeding of Your Baby Killer Unicorn," by Diana Peterfreund (a.k.a. "The One with Unicolts")
The Plot: A devout Christian girl with a hidden gift for attracting and hunting unicorns (which in this universe are violent and man-eating), rescues a baby unicorn from drowning and starts taking care of it, against her better instincts. This causes her to question whether unicorns are really evil and if they can be tamed.
The Word: This story left me feeling I should have read Peterfreund's books first (she has a series about killer unicorns, Rampant and Ascendant), and not in the good way. The heroine keeps referencing "what happened last fall" every other page (a mysterious event that resulted in both her first kiss and the deaths of her cousins), and the ending is completely open ended. I felt like this was a prologue to something and it does not work very well as a standalone for those unfamiliar with her work. C+

"Inoculata," by Scott Westerfeld. (a.k.a. "The One with Half-Zombies")
The Plot: Our heroine, along with various children and a few adults, have spent the last 4 years since the Zombie Apocalypse living within a fenced-in farming compound, eating crops and canned food while zombies groan behind the fence day and night. When she discovers a way to inoculate oneself against the infection, but at a steep price, she has to decide between risk and freedom, or safety and stagnation.
The Word: This had an interesting but not-entirely-developed plot, but that may just have been due to the story's length. I enjoyed the theme of freedom but at the cost of one's humanity, but I felt the characters made their decisions very cavalierly and there weren't really any real consequences for that choice. B

"Princess Prettypants," by Meg Cabot (a.k.a. "The One where Unicorns Fart Rainbows")
The Plot: Our heroine gets a unicorn for her birthday and uses it to get revenge for herself and her classmates.
The Word: I've never read Meg Cabot before, but I don't think I'm missing anything. The weakest story in the collection, the story is a shallow construction of first world problems and sitcom stereotypes - the most heinous of which is the heroine's Homeschooled Sidekick who is of course Super-Christian, super naive, and unable to dress herself. After reading the gripping and profound stories that came before, I thought Cabot's story seemed ridiculously superficial and lame - like an episode of Saved By the Bell that accidentally popped up in my DVR next to episodes of Game of Thrones and Call the Midwife. D

"Cold Hands," by Cassandra Clare (a.k.a. "The One With The ZomBoyfriend")
The Plot: In a town where the dead are prone to coming back to life, our heroine uses this curse to her advantage when her boyfriend is murdered by his uncle.
The Word: I liked the setting in this book (which was contemporary but with a feudal political system of dukes and princes and such), and how the zombies had come to be accepted (or not) in the town's community. That being said, the plot itself seemed a little abrupt and oversimplified - but the ending does leave one with a nice little chill. B

"The Third Virgin," by Kathleen Duey (a.k.a. "The One With the Life-Sucking Unicorn")
The Plot: An immortal unicorn whose horn has healing properties spends centuries searching for true virgins - the only people who are capable of communicating with him. When he becomes addicted to the darker side of his powers, he hopes the next virgin he finds will be able to do what he can't - end his life.
The Word: This was an odd, dark little tale. The unicorn is such a desperately lonely figure, who's only capable of communicating with a very rare type of individual. He spends most of his life searching for one, but as he succumbs to his hungers (saving life gives him a high, but taking one gets him a stronger one), he wonders if he's worthy of companionship or compassion anymore. I liked this take on it, even if the ending is a little unclear. B+

"Prom Night," by Libba Bray (a.k.a. "The One with Mum and Dad Zombies")
The Plot: The teenage heroine is a cop (and a Zoroastrian!) in a broken-down society run entirely by children and teenagers - after the adults (who were the most susceptible to the zombie virus) were driven out.
The Word: This beautiful and hauntingly sad tale was surprisingly moving - especially considering there's only one zombie depicted in the entire story and he's quickly dispatched. The story is subtly and movingly told, of teenagers playing adult roles in an attempt to pretend the world isn't broken, while at the same time trying to hold tight to some of the traditions of adolescence while they're still able to celebrate them (like the town-organized Prom Night). A

And ... honestly ... the zombie stories got most of the highest grades. I never really pegged myself as an end-of-the-world person. I like dark stories, but I do prefer happy (or at least stable) endings, and I never thought I'd get them with zombie stories. Who knew? That being said, most of the unicorn stories held up as well.

If you're a fan of supernatural stories and desire an introduction to a whole slew of incredibly talented authors, do give Zombies vs. Unicorns a try.
A-

You can purchase Zombies vs. Unicorns here.