"The Light Between Oceans," by M.L. Stedman 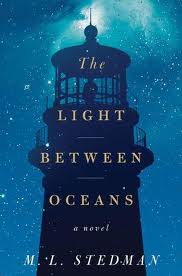 Tom: A war veteran still troubled by the horrors of war, he hopes the isolation of working a lighthouse will calm his spirit. The addition of a passionate and fiercely loving wife disrupts his peace - but in a good way.

Isabel: The deaths of her brothers in the war taught her to grab life and love however she can - it results in her marriage to Tom, and also her decision to keep a baby that washes up on their island.

Hannah Roennfeldt: Her marriage to an Austrian earned her the townsfolks' enmity, and the mysterious loss of her husband and new baby at sea earns her their pity - but hope springs eternal.

Ralph: Tom's coworker who sees him once every three months on the supply boat.

Violet and Bill: Isabel's parents, whose heartbreak at the deaths of their sons is eased by the arrival of their new granddaughter, Lucy.

The Word: The story centres around Tom and Isabel, a lighthouse operator and his wife who are the sole occupants of the isolated south Australian island of Janus. While they love each other and have grown to love and appreciate the strange, magical isolation of Janus, their attempts to populate the island have resulted in miscarriage after miscarriage.

Two weeks after Isabel's third pregnancy results in a stillbirth, a boat washes up on shore, carrying a dead man and a living baby, wrapped in a woman's cardigan. Tom's duty is to signal to shore, write it in the log books, alert the authorities, but Isabel, in a moment of desperation, stays his hand. The child's most likely an orphan, she says. The mother probably drowned. An orphanage is no place for a child. This is obviously God's will.

Tom loves Isabel and knows the toll her miscarriages have taken on her. So, with deep misgivings, he remains silent. They bury the body of the dead man and pass the child off as their own, naming her Lucy. But as years pass and they finally get shore leave, they discover the moral fantasy they built around Lucy was only that - a fantasy - and that their actions ruined the life of a tragic young woman.

The novel's central debate is on the importance of rules and morality, and the spectrum of thought and action in between. Tom, an emotionally-scarred veteran of the First World War, clings to the letter of the law in order to forge some form of order out of the chaos of life, but finds it difficult to accommodate human frailty and feeling into his rigid code. Isabel, meanwhile, lives for emotion and impulse - but quickly finds herself rewriting the rules to support her own desires.

I love how beautifully the author describes the lonely island of Janus, and the solitary work of maintaining the lighthouse. She aptly conveys how easy it is to use that isolation to build one's own moral framework - it's convenient for Tom and Isabel to assume Lucy is an orphan and that they rescued her when there's no one to gainsay them. Once they return to the mainland, however, they are forced to realize that even in isolation, they are connected to other people and that their decisions have far-reaching consequences.

A secondary theme is also the importance of human life, and how its addition or removal from a family can have long-standing effects. It's not only Tom and Isabel who come to embrace Lucy as part of their family - but Isabel's parents do, too. Grandparenthood enlivens them again, and allows them to move on after the death of their sons in the war. But the author allows us into the heads and lives of Lucy's birth family, as well, and how her disappearance affected them. With whom does Lucy belong?

It would be easy to dislike Isabel as a character, especially in the novel's second half as she retreats further and further into the willfully blind belief that she's only looking out for Lucy's bests interests. However, Isabel and Tom are so fleshed-out and intimately described that it's impossible to hate them. One can hate their decisions and their weaknesses, but not them. While Tom receives the lion's share of the POV, those secondary passages into Isabel's consciousness depict such a strong, sudden, fierce love she has bottled up inside of her, just waiting to be unlocked.

As it stands, The Light Between Oceans is a fantastic book. The pacing is swift and enjoyable (particularly in the novel's second half as the suspense builds), the characters are fascinating, the central theme thorny and ripe for book club discussions. It manages a near-perfect balance between flashy drama and thematic substance.
A

You can purchase The Light Between Oceans here.