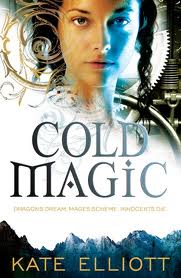 The Protagonist: Cat Hassi Barahal. An orphan raised in the household of her aunt, uncle and cousin Bee, she just wants to blend in and avoid getting involved in radical politics between the lower class and the princes and mages.
Her Angst: Her life plan is shot to hell when her "beloved" aunt and uncle bind her in marriage to a Mage House to spare their own daughter - who, in turns out, has magical powers the Mage Houses are perfectly willing to kill for.

Bee Hassi Barahal: Cat's crazy-annoying cousin who acts like a chihuahua who was force-fed espresso beans. Also has possibly world-saving magical powers. Sucks to be the world!

Andevai Diarrisso Haranwy: The powerful but young cold mage tasked with marrying the eldest Hassi Barahal daughter in order to secure her powers for his Mage House. Too bad he marries the wrong girl instead!

Roderic: Cat's Surprise!Brother! Revealing any more would spoil it.


The Word: Cat Hassi Barahal is the orphan niece of an illustrious family that's fallen on hard times. For the first few chapters, she attends university with her bouncy, perfectly beautiful and monstrously annoying cousin Bee. The world she lives in is divided by unrest - the continent of Europa is split into hundreds of puzzle pieces ruled over by spoiled princes and powerful Mage Houses, who are in turn threatened by the advent of the Industrial Age and the radical democratic notions of the increasingly rebellious populace.

Cat's personal world, however, is thrown into turmoil when a young mage from the powerful Four Moons House abruptly arrives and demands Cat's aunt and uncle honour a contract they made years ago promising the eldest Hassi Barahal daughter in marriage. Cat, being two months older than Bee, is promptly handed over to a total stranger in marriage and is told to make the best of it. Her new mage husband Andevai is, of course, arrogant, vain, pig-headed, and Inexplicably Handsome in the way of all Obvious Love Interests.

Too late, Cat realizes her aunt and uncle tricked the Four Moons House into accepting her in place of their own daughter, who has an innate magical talent the head Mage wants. Cat is then forced to flee when she overhears the head Mage ordering her new husband to kill her, in order to free him to marry Bee.

While on the run, Cat comes to learn more about the world, the tyranny of the petty princes and Mage Houses, and her own secret heritage and innate magical talents.

Confused? Well, the first 150 pages of this novel are nigh-incoherent - full of confusing staging, stilted dialogue, contrived situations, and screamingly annoying characters (can Bee just go away? Forever?), with piles and piles AND PILES of clunky exposition inexpertly wadded into every nook and crevice. I'm talking about telling over showing, "As You Know Bob*" Dialogue, and just plain infodumping, where our heroine presumably stares off into space while she relates pages of history to the reader that ultimately have nothing to do with the story at all.

I'm not kidding. It's like every character is on the Tourism Board for their particular tribe or clan or country and are incapable of introducing themselves without also listing their country's historical battles, natural resources, and cultural holidays. It's disappointing, because the worldbuilding in itself is interesting and original - an alternate universe in which Rome crumbled before it could become a driving cultural force, leaving Europe and Africa a mosaic of cultures and traditions. The majority of the worldbuilding is easily conveyed by the organic interaction of the characters with the setting.

Thus, the blatant infodumping is entirely unnecessary, which makes it as offensive as it is puzzling. I've read Kate Elliott before - her Crown of Stars septet was amazing and managed to convey an intriguingly gender-bent medieval society without reams and reams of lectures. So why does she go completely overboard overexplaining everything here? Is it because this book is more targeted towards YA readers? Because teenagers need to be talked down to and hand-held through the harder bits?

That being said, the story does start to pick up steam around the time Cat hooks up with her Arrogant, Vain, but Inexplicably Handsome hubby - basically, once the story starts being about Interesting Things That Are Happening Right Now and less about Less-Interesting Things That Happened a Thousand Years Ago To The Ancestors of Minor Characters. To Elliott's credit, once the plot gets going, it's pretty hard to put the book down. She's a master of description, setting, and suspense. However, even when the story is chugging along at full pace, the writing style still seems juvenile and even a little corny, at least in regards to the overwrought dialogue and the characters' behaviour.

It's difficult for me to truly summarize my reaction to this novel - while on the whole, I enjoyed reading it and thought the ideas and the setting were interesting, I felt enormous swathes of dialogue and exposition could have easily been cut and I couldn't really get invested in any of the characters (except perhaps Andevai - he is Inexplicably Handsome). I felt torn between Raging Frustration and a compulsive urge to turn the next page.

So I loved it - and I hated it? Ultimately, I think I loved it because Kate Elliott writes ferociously addictive set pieces and conflicts - and hated it because the author wastes so much time stopping to explain things when she could instead be writing more ferociously addictive set pieces and conflicts. Hopefully this might thin out in future books, such as Cold Steel (which is already on my TBR).

I'm just saying - most people start reading epic fantasy when they're still in their teens. Give teen readers the benefit of the doubt.
B-

You can purchase Cold Magic here.

*As You Know Bob dialogue is when two characters talk about things they both already know for no reason except to inform the reader.
Posted by AnimeJune at Tuesday, October 30, 2012