"I Kissed an Earl," by Julie Anne Long 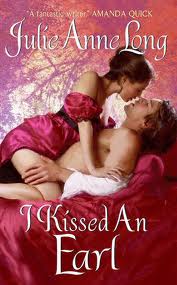 The Chick: Violet Redmond. A spoiled, petulant debutante with an inflated sense of self-worth, when she suspects her MIA brother Lyon might be a pirate, she bribes her way onto the ship of the man hired to track him down. Piece of cake!
The Rub: "What do you mean I have to eat hard tack and peel vegetables and earn my keep? Isn't my Pretentiously Wild-Spirited and Secretly Clever Presence payment enough?"
Dream Casting: Anne Hathaway.

The Dude: Captain Asher Flint, Earl of Ardmay. An American-raised bastard-turned-sea-captain, he was raised to the rank of Earl by the King and gifted with a vast estate - but if he wants the fortune to maintain said estate, he will have to find and capture an infamous pirate named Le Chat.
The Rub: The crazy mess of a woman who's stowed away on his ship will do everything in her power to thwart him - but she also has information on Le Chat that he desperately needs.
Dream Casting: A younger Liam Neeson.

Violet: I am bored and wealthy! FATE! GIVE ME PURPOSE!

Random Extra: Hey all these random facts about this random pirate remind me of your missing brother, Lyon!

Violet: TO THE SEA! *bribes her way onto ship*

Violet: Hello, peasant. Where's my feather mattress? What time are cocktails? Why is there no shuffleboard equipment on deck?

Flint: YOU'RE A MORON.

Violet: But I'm so Fiery and Clever! Even when I'm outmatched by almost everything and entirely due to my own poorly-planned decisions! Don't you find me charming?

Violet: But I'm gorgeous and rich! How is that possible?! We could work together to find and save Le Chat.

Flint: You mean find and capture and/or kill Le Chat.

Violet: Let's cross that Sibling-Killing Bridge when we come to it.

Flint: OMG, you really ARE a moron!

Violet: But this time I did it because I'm in love with you!

Flint: I am inexplicably turned on!

Shipboard Storm Sex: *is had*

Flint: Well, since you asked nicely.

The Word: Much like my reaction to Seize the Fire, I found that while Julie Anne Long's writing is as ornate and lyrical as it ever was, the stupidity and selfishness of her heroine prevented me from truly enjoying the book.

I Kissed an Earl is fourth in the Pennyroyal Green series, one that deals primarily with the feuding families, the scandalous Everseas and the snobbish Redmonds. The series started with The Perils of Pleasure (good), Like No Other Lover (very good), and Since the Surrender (dumb but charming).

Violet Redmond is spoiled and bored, and has garnered a bit of a reputation around Pennyroyal Green for being a crazy hot mess - her highlight reel includes an attempt to throw herself down a well after an argument with a suitor.

At a party in town, however, she overhears speculation about a nefarious pirate named Le Chat who has been attacking and sinking English merchant ships. Due to certain details regarding his nickname, the name of his ship, and his apparent resemblance to Violet's brother Jonathan, Violet begins to suspect Le Chat might be her older brother Lyon, who went missing ever since his heart was broken by Olivia Eversea.

Surprisingly, no one in her immediate family is willing to take her suspicions seriously (throwing oneself down a well for kicks can put a damper on one's trustworthiness). So she does what any pampered, spoiled rich girl would do - pay someone to break the rules for her. She bribes her way on to the ship of Captain Asher Flint, a man recently named an Earl by the King in return for capturing Le Chat and bringing him back to face justice.

Flint is, shall we say, less than pleased to discover a Too Stupid To Live heroine stowed away on his  ship. A TSTL heroine who immediately demands better food and a better room, and proceeds to explain how he's inferior to herself because he works for a living.

Violet is not as bad as, say, Olympia in Seize the Fire. For one thing, she's a (somewhat) better fleshed-out character who is smart in her own way but has never been given an appropriate outlet for her passions and intelligence in her stifled life in Sussex. I get it, she's sheltered, she's repressed, she's not going to know certain things, but it's like the book itself can't decide what type of Crazy she is. Parts of the story imply that she can't help being nuttier than a fruitcake because Her Heroine's Heart Is Too Big For Sussex! But there are just as many aspects of the story that suggest she acts like a hot mess on purpose because she gets off on the attention. And I found I really had no sympathy for the Paris Hilton of Pennyroyal Green.

To her credit, she does develop more understanding and intelligence as the story goes on - particularly in regards to the interesting mystery surrounding Le Chat and why he's sinking all those ships. She is someone who's been cosseted and sheltered, and she's quite aware of that, so she does need to start at the bottom, character-wise. However, she never stops pulling stupid, contrived stunts - the difference is that later in the book, instead of doing it because she's a bored prat, she's doing it because she's in love. So that makes it better?

Flint was somewhat less developed - not surprisingly, since the vast majority of the novel's POV is told from Violet's skewed perspective. A fatherless bastard, Flint was saved from rootless poverty as a child by Captain Moreheart - a man who was recently killed by Le Chat when the pirate captured and sunk his ship. Revenge fuels Flint even more than his desire for a family.

Most of the delicious tension in his relationship with Violet comes from them being completely at cross-purposes about Le Chat. Flint wants to bring Le Chat to justice for murder and theft (and also for the King's reward), while Violet wants to save him, since if Lyon is attacking and sinking ships, he must be doing it for some higher purpose. However, Violet needs Flint's ship, and Flint needs Violet's inside info on Lyon, so the two have to stick pretty close together while maintaining a pretty cat-and-mouse game regarding their intentions. Admittedly, most of this is pretty entertaining.

That being said, I couldn't really invest myself in either of the characters, although Julie Anne Long's lovely, insightful writing style tried its very best. I Kissed an Earl is not a terrible novel. It had a genuinely entertaining piracy subplot, good writing and description, interesting hero and heroine tension. However, the romance itself never fit into place for me. Protagonists should definitely screw up and make mistakes, but the romantic plot should emerge organically from a variety of decisions and factors. The story's sole existence should not rely on a character's stupidity.
B-


You can purchase I Kissed An Earl here.