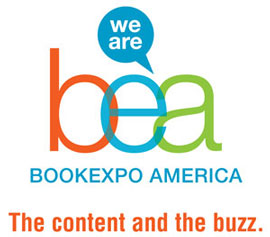 On Day Two Emily and I woke up early to get to the Javits in time to register for the blogger convention. Thanks to the location of our hotel, we didn't have to wake up that early.

Rolling up to Registration, I collected my lanyard, my BEA program, and my food and drink tickets. As the conference started, attendees were offered pretty spectacular totebags (complete with zippers and beverage holders) and some slightly-less-than-spectacular books - including an aggressively-marketed novel called Catena: Journey to Virginland that my fellow attendees and I were having absolutely none of.

The conference started out well - even though I was starving because the BEA Blogger "complimentary breakfast" turned out to be stale bagels and coffee. Thank God I'd smuggled a nut-free granola bar in my purse. A suggestion for next year, conference organizers: fruit is cheap.

Our keynote speaker was Will Schwalbe, who wrote The End of Your Life Bookclub and worked as editor in chief for Hyperion Books. I'd met him previously at last year's convention during the author roundtable, and his befuddlement at the time as to What Bloggers Actually Did left me less than enthused about what he would present as keynote speaker.

An affable man with rounded edges, he started out with some interesting questions - like, how do bloggers define success? And how does our definition of success differ from the definitions of people elsewhere in the publishing industry? He asked a number of bloggers about this and came up with the answer that bloggers define success by their influence, which made a lot of sense. For a lot of bloggers, it's not all about the numbers or the stats or the pageviews, but by how far one's opinion can travel over the internet.

Because we don't only blog - we grouse on Twitter and Tumblr and Pinterest and message boards about our thoughts and feelings about books as well.

He also talked about engagement - how a few really invested, engaged users is better than a lot of apathetic, uninvolved users. Again, I agreed - I have a pretty small readership and social circle, comparatiely speaking (although it's getting bigger), but we're all really passionate about books and express our feelings about it all the time. It seemed like Schwalbe had done his homework about the blogging community - a refreshing change from Jennifer Weiner, who pulled a Gilderoy Lockhart during her keynote last year and made it all about her (and delayed the following panel to sign copies of her own books).

....but then Schwalbe started to backslide. First, he started by making catty comments about Amazon reviews and Amazon reviewers. Which was when I thought, oh no. Then he started encouraging bloggers  to demonstrate forgiveness and cut people some slack about policing web behaviour. How do you define forgiveness, Mr. Schwalbe? If an author acts like an ass on the internet, am I somehow not allowed to let that influence my decision to not purchase or review their work? Excuse me?

And then his speech quickly dissolved into a paternal shaking of the finger at "snarky, savage" reviews, because "kindness rocks!" It sounded like the clueless teacher trying to sound relevant to a room full of reluctant students - only we're not students and we're not children and it struck a painfully wrong chord to be treated as such. It was an irritating echo of Jennifer Weiner's "Fairy Dust" comment from last year.

Schwalbe then proceeded to recite, tonelessly and apparently without a shred of irony, the chorus to Natasha Bedingfield's pop song "Unwritten." Really, seriously.

Next up, I decided to go to the YA Editor Insight Panel - because, well, I'm interested in editing for YA, and I'm also interested in the sort of decisions and trends that YA editors have been noticing lately.      On the panel was Cheryl Klein from Scholastic, Deb Noyes from Candlewick Press, Jen Doll from The Atlantic, and Emily Meehan from Disney-Hyperion. Attendees were greeted by a mountain of truly excellent free books coming in (something the Adult Editor Insight Panel apparently did not have) and I also got to meet The Booksmugglers themselves, Ana and Thea!

While the editors did speak of trends, mostly they just sold their books (including one where Marie Antoinette is a murderous ghost). They did mention that subgenres are no longer as strict now - YA's definitely getting into cross-genre books that don't have any strict definition. The editors on the panel unanimously agreed that they were looking for and preferred flawed protagonists. No Mary Sues or Gary Stus. I asked them about romance in YA, and they replied it was a bit of a chicken-and-egg deal now - publishers initially acquired a lot of romance, and as a result a romantic plot line is now a reader expectation for a lot of stories.

While there were a few interesting points discussed, it did seem (as a lot of others have mentioned before me) that it was more of a Buzz Panel, and it didn't really have anything aimed specifically at bloggers or blogging. At least the swag was nice.

After that, I attended the Adult Book Blogging Pros panel, mainly so that I could meet the fabulous Jim Hines and Sarah Wendell of Smart Bitches in person. A lot of this panel was stuff I'd already learned - but then, I've been blogging for nine years (yes, nine). Basically, get your voice out there and establish your own style and that will bring in the type of readers you want. My favourite piece of advice from Sarah was let people not like you. Because there will always be people who don't and you can't build a platform around avoiding other people's dislikes.

Mandi Schreiner of Smexy Books (who was also on the panel) advised bloggers to keep it cool when it came to Internet Drama - by all means defend yourself, your close friends and major issues (like Plagiarism), but otherwise, don't get involved in other people's fights if they don't concern you. Internet mobs can turn really nasty, really quickly and misinformation is contagious.

It was at this panel that I realized there were a couple of romance authors who had signed up for the Blogger Con in order to pick the brains of bloggers and find out how to get us to review their books. Honestly, that made me a little uncomfortable, as did a conversation we had about how bloggers shouldn't make their critical reviews funny because it hurts authors' feelings. Sorry, but as I've mentioned before, reviews aren't for authors. You have a critique group and an editor to respectfully analyze your work. Reviews are for readers.

After that came the Ethics Luncheon, hosted by Jane Litte of Dear Author with Richard Newman of Hinch Newman LLP and Professor Geanne Rosenberg of Baruch College. It was a little dry, but thankfully a couple of people from what I like to call the "Tinfoil Hat Table" made it a little more interesting.

The panel members tried to make the session about how bloggers can protect themselves from inadvertently violating American FTC regulations (which consider positive blog reviews of ARCs to be endorsements). So while they were trying to explain that the origins of your review copies should be clearly and conspicuously indicated - the two women seated at the Tinfoil Hat Table muddied the waters with questions like "Why doesn't the FTC go after Fake Mean Reviews?" Um, because negative reviews are not endorsements. This person also started babbling about how she had been asked to join a Cabal of publishers and reviewers who were dedicated to ruining authors they didn't like with negative reviews. Okaaaaay...

The other lady at the Tinfoil Hat Table table who'd claimed to have worked in journalism for many years stated that large newsgroups dodged copyright issues when showing cover art for books by using photographs taken of the books instead of the cover images themselves - which is completely and utterly incorrect. Newspapers don't do that. Entertainment Weekly doesn't do that. It was hilarious but also frustrating because the actual, educated people at the panel were trying to discuss whether displaying a book cover in your review was violating copyright (it isn't - it falls under fair use).

After the Ethics Luncheon, I went to the Blogging Platforms panel, which was an extremely informative and successful panel given by Rachel Rivera of Parajunkee, Stephanie Leary of Wordpress,  Evie Seo of Bookish, and April Conant from Good Books and Good Wine (whose voice, as she'd predicted, was just about shot). There, they explained the differences between blogging platforms such as Blogger, Wordpress, and Tumblr. I came away from that panel with a lot of new information about the different platforms.

Blogger, apparently, is a good starting point for bloggers because it's extremely easy to use and has a lot of options - however, once you have experience and want to branch out with more coding, Blogger's interface can be limited. Oh, and Google also owns everything you write on it. Eep. Wordpress, on the other hand, can be more complicated, but it has greater design options and can easily shift from being hosted by Wordpress to being selfhosted, so a lot of bloggers wind up exporting their Blogger blogs to Wordpress eventually. For now, I think I'll stick with Blogger since it is easier, but I may have to consider Wordpress later.

Next up, I went to Extending the Reach of Your Blog Online, hosted by Mandy Boles of The Well-Read Wife, Malle Vallik of Harlequin, Eric Smith of Quirk Books and Geekadelphia, and Robert Mooney of Blogads. This panel, I thought, was a nice companion to the Blogger Platforms panel because it also spoke of different social media platforms through which to talk about books and promote your blog - like Vine (Twitter but with Video), Rafflecopter, Reddit, StumbleUpon, Pinterest, Spinterest, Triberr, Distillry (how to make sure which of your Twitter followers are "influential" - i.e. have the most followers), and Twiangulate.

After that came the Closing Keynote with Randi Zuckerberg - whose speech was half an hour late because she hadn't brought a working laptop. Not a promising sign when your entire presentation is more about Cool Things On the Internet That Are Tangentially Related to Blogging than Actual Blogging. I took some notes but I don't think I picked up anything I could really use for my own blog.

Finally came the Blogger Happy Hour, where the remaining attendees took their single drink tickets (whoo! Big spenders!) to the bar, around which more swag and free books and book promotions were arranged. Most of the books being given away weren't my thing so I avoided them - and carefully stepped around the piles of (still) unclaimed copies of Catena to speak with other bloggers.

This year's Blogger Convention, barring a few missteps, was a vast improvement over the previous years. There was a greater awareness of what bloggers actually do and a variety of different topics to discuss and learn from - most of which were (or at least tried to be) aimed at how bloggers operate on their own, rather than how bloggers can serve publishers. I liked how most panels had at least one well-known blogger on them, as well as people from other areas of the publishing industry, so we received multiple perspectives on what we do and our impact on publishing.

Mostly, though, I was just glad I survived it enough to speak in coherent sentences with the blogger friends I reconnected with.
Posted by AnimeJune at Tuesday, June 11, 2013