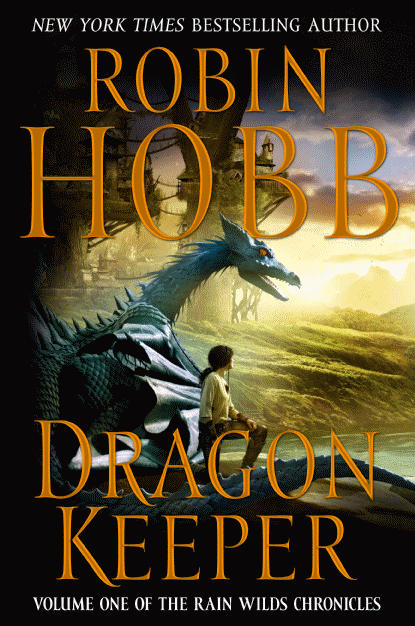 Thymara: An inhabitant of the Rain Wilds born with clawed hands and feet, she's an outcast in a society that traditionally abandons deformed children. She's hungry for the chance to prove she's worthy of life and love.

Alise: An absent-minded scholar of dragons and Elderlings who is shackled to a cruel and selfish husband. Her one dream is to be able to study dragons for real, but how far is she willing to go to realize it?

Greft: A member of the dragon keepers who isn't above using manipulation and mind games to establish dominance.

Tats: A young freed slave who joins the dragon keepers and used to have a serious crush on Thymara.

Sedric: Alise's BFF and, unbeknownst to her, her husband's gay lover. Fastidious, well-dressed and snobby, he wars between his loyalty to Alise and his love for Alise's husband.

Captain Leftrin: The owner of a liveship barge who is hired to accompany the dragons and their keepers. Starts to develop feelings for Alise.


The Word: Well, it appears this review will be yet another stop on the Favourite Authors Who Disappoint Me Tour. I'm a huge Robin Hobb fan, and I particularly enjoyed her Liveship Traders Trilogy, so when I heard she was going back to the world of Bingtown and the Rain Wilds for another trilogy, I was psyched.

The Liveship Trader Trilogy ended with Tintaglia - the last living dragon - rescuing the surviving sea serpents and helping them prepare for their own transformations into dragons with the help of the Rain Wilds and Bingtown Traders, who provided assistance in return for Tintaglia's promise to protect Bingtown's shores against invaders.

Like big, scaly butterflies, dragons start out as sea serpents and then enter cocoons of mud and shared memories - emerging as dragons the next year. Thanks to an ancient earthquake, the dragons died out, the sea serpents were left adrift, and the remaining cocoons were buried, destroyed, or harvested by ignorant Traders to create liveships.

Was that so hard to explain? No? The author takes every available opportunity to repeat this piece of worldbuilding, over and over again, with different characters and threads of dialogue, until I just about threw this book down in disgust. We get it. It's doubly frustrating for me because I read the previous trilogy, and know this information already, but even to acclimate new readers, the repetition is excessive.

Anyway, this trilogy opens when the triumphant hatching of the new generation of dragons goes horribly awry. The surviving serpents were too old and starved by the time they were rescued to build proper cocoons, and the resulting dragons are either stunted, malformed, sickly, dim-witted, or a pitiable combination of all four. Dragons being an unsentimental species, Tintaglia swiftly abandoned them to pursue other options, leaving the Traders at a loss as to how to care for these expensive, useless, and increasingly aggressive creatures.

Eventually, the Traders decide to move the dragons to a new location - the ancient Elderling city of Kelsingra. But first, they'll need to hire people to tend and feed the dragons - hopefully people with no real social ties or futures.

Enter sixteen-year-old Thymara. As a Rain Wilder born with claws and scales, she should have been abandoned at infancy, but her father saved her at the last minute. While her father loves her, she is still an outcast and forbidden to marry or have children. To her, this job might be her only chance at adventure, wealth, and independence - but she discovers the deformed dragons might be smarter than the authorities let on.

While the story seems interesting enough, the novel takes a tediously long time getting to it. The first seventy percent of the novel is spent on fanservice (several characters from the previous trilogy have unnecessary cameos) and set-up - long scenes of Alise's dissolving marriage and Thymara's angst at being an outcast, along with several scenes of concerned parties haggling over what to do with the dragons while repeating the central concept of serpents -- cocoons -- dragons -- liveships over and over and over again. The novel could have easily started when the story did, with the characters' backgrounds fleshed out with flashbacks.

The novel still retains hints of Hobb's mastery of fantasy - original settings, solid worldbuilding, a variety of female characters, moral ambiguity. This is especially true for the latter part of the novel, as the deformed yet still arrogant dragons adapt to the presence of the humans they depend on while humans bicker over what should be done with them.

While this novel was ultimately a disappointment, I'll still hold on to read future books. After all, now that the set-up is over, the second book can be all about story, and Lord knows Robin Hobb has redeemed heinously annoying characters before (I'm looking at you, Malta). If you're a fan of Robin Hobb, I recommend sticking it out. If you're not a fan, it would be better to read The Liveship Trilogy first.
C+
Posted by AnimeJune at Thursday, June 20, 2013