Okay, so you've read through my posts about my time at BEA 2013. Now it's time to succumb to the inevitable... 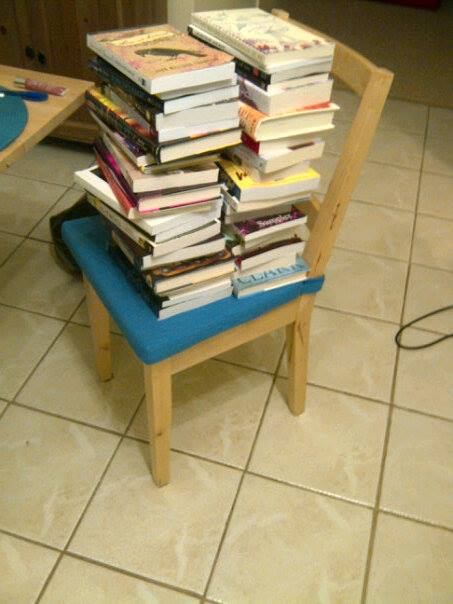 Yes, these are the precious Advance Reviewer Copies I obtained through various means during Book Expo America 2013. This year, as you may recall, I was determined to be choosy, because I knew it would be Damn Hard to drag these books all the way home (and it was!). So I tried only to take the books I was excited about reading. Because of this, I decided to list my loot in descending order of "Excited About."

1. Rose Under Fire, by Elizabeth Wein (Hyperion, September 2013): I stood in line for a long as time for this, and it was completely worth it! I adored Code Name Verity!

2. The Infinite Moment of Us, by Lauren Myracle (Amulet, August 2013): I picked this one up and got to gush over how much I loved Shine when I briefly ducked out of the enormous Fangirl line. Myracle was super-nice but she repeatedly warned me that this book wouldn't be the same type of thing. Don't care! Still excited!

3. Invisibility, by Andrea Cremer and David Levithan (Philomel, out now): I got this signed at the Autographing tables during Book Expo. I loved Levithan's Every Day, and the concept of this novel (a boy who's cursed to be invisible) sounded interesting.

4. Fangirl, by Rainbow Rowell (St Martin's Griffin, September 2013): a.k.a. the book I waited The Absolute Longest In Line For. I haven't read her previous novel Eleanor and Park, but this was a novel  where the concept (a girl who's a part of a fandom and writes slashfiction) sounded so interesting I knew it couldn't pass it up.

5. Two Boys Kissing, David Levithan (Knopf, August 2013): This one I found my accident - I knew he would be signing this book, but it was at the same time as another signing. However, on my way out with Awesome Roommmate Emily, we saw he was still signing books and so we got ourselves copies! Two Levithan novels in one day!

6. Survival Lessons, Alice Hoffman (Algonquin, out now): I will read literally everything Alice Hoffman writes - even a rewrite of Wuthering Heights. Plus getting this book meant I got to meet her in person.

7. Cherry Money Baby, by John M. Cusick (Candlewick Press, September 2013): I picked this up at the YA Editor Insight Panel at BEA Blogger Con. The story sounded sudsy and fun - involving a smalltown girl who is happy to be a smalltown girl, until a famous celebrity arrives and throws her life upside down. I'm in!

8. The Universe Versus Alex Woods, by Gavin Extence (Redhook, June 2013): I picked this one up from a huge pile at the Hachette pavilion. Kirkus' BEA guide gave it a spectacular review and the story sounded weird and magical-realismy, which runs right up my alley.

9. The False Prince (Scholastic, out now): They were handing out free copies of this at the Scholastic booth and I remembered how much The Booksmugglers loved it.

10. These Broken Stars, by Amie Kaufman and Meagen Spooner (Hyperion, November 2013): I picked this one up at the YA Editor Insight Panel at BEA Blogger Con, where it was described as Titanic in Space - apparently because it involves a rich girl, a poor boy, and a big honking spaceship crash. That plus positive blogger buzz made me pick it up.

11. Fire With Fire, by Jenny Han and Siobhan Vivian (Simon and Schuster, September 2013): This was in the goodie bag I received from the SimonTEEN party. After hearing the awesome authors gush about it at that party, I was super excited to read it - of course, I'll have to read the first book, Burn for Burn first.

12. Beautiful Music for Ugly Children, by Kirstin Cronn-Mills (Flux, out): While I was touring the expo floor, I found the Flux booth and had a great talk with the publisher about unconventional YA stories, and afterwards he gave me a copy of this novel, which has been on my Wishlist for a while. Score!

13. All Our Yesterdays, by Cristin Terrill (Hyperion, September 2013): I also found this at the YA Editor Insight Panel at BEA Blogger Con. I wasn't kidding about the amount of swag at that panel. The story sounds a lot like the romantic YA version of Terminator - a heroine in the future visits her past self to stop a friend from inventing something that destroys the world.

14. Tumble and Fall, by Alexandra Coutts (Farrar Straus Giroux, September 2013): I picked up this book at the Autographing tables because the concept intrigued me - the world is going to end in a week, how would teens react to that?

15. The Rithmatist, by Brandon Sanderson (Tor, out now): They still had tickets for his signing by the time I arrived at the Javits, so I got him to autograph a copy. I wouldn't normally be interested in this book (I read one of his other fantasies, and it bored me), but The Book Smugglers' positive review of it changed my mind.

16. When I Was the Greatest, by Jason Reynolds, (Simon and Schuster, January 2014): This was in my goodie bag from the SimonTEEN party. Jason Reynolds was crazy-charismatic during his interview as he related his adventures in New York City with his artist roommate, so I'm pretty excited to read this novel about three boys growing up in Bed-Stuy.

17. Just Like Fate, by Cat Patrick and Suzanne Young (Simon and Schuster, August 2013): This also was in my SimonTeen party goodie bag! Again - the authors' fab interiew and the great concept grabbed me: the heroine has to choose between staying by her grandmother's deathbed or going out with friends, and the story shows us how each decision would have affected her life.

18. Counting by 7s, by Holly Goldberg Sloan (Dial, August 2013): I picked this up at the Penguin pavilion because it sounded like an adorable story about a girl who comforts herself and builds a new life after tragedy by counting by sevens. Plus, it came with good buzz from Kirkus.

19. Hero, by Alethea Kontis (Harcourt, October 2013): This was an impulse signing - the sequel to Enchanted, which I've been wanting to read for a while. Kontis was signing books at a satellite autographing table because her time had run out but her books had not - and that table was right next to the line for Rose Under Fire. But I'll still need to read the first book.

20. Dear Mr. Knightly, by Katherine Reay (Thomas Nelson, November 2013): I picked this up from a pile at the HarperCollins pavilion because it sounded absolutely charming. A graduate student and Jane Austen fan gets a free education in return for engaging in an epistolary relationship with a mysterious Mr. Knightley. How could I resist?

21. That Part Was True, Deborah McKinlay (Grand Central, February 2014): I snagged this from the Grand Central booth - another epistolary novel, this time between an older woman and her favourite author.

22. The Son, by Philipp Meyer (Ecco, Out now). My Fantastic Roommate Emily gave me a copy of this from the HarperCollins party she went to. A vast, sweeping historical family saga about Texas? There isn't a single thing about that sentence that I don't like.

23. Sorrow's Knot, by Erin Bow (Arthur A Levine Books, November 2013): Another free book from the YA Editor Insight Panel. I was initially turned off by the iffy cover art and lack of a blurb, but the Book Smugglers reminded me that Erin Bow wrote Plain Kate, which was apparently pretty good. Plus the concept of LadyMagic seemed interesting.

24. Someone Else's Love Story, by Joshilyn Jackson (William Morrow, December 2013): This was another bookgift from Emily from the HarperCollins party, about a single mother who falls in love with a geneticist.  It got a lovely review in Kirkus.

25. Who Asked You? by Terry McMillan (Viking, September 2013): I picked this up at the Penguin booth as a lark. Written by the author of Waiting to Exhale, this novel's about a hotel maid who has to look after her itinerant daughter's children. It sounded like an interesting family story from an author I'd never tried before.

26. Love and Lament, by John Milliken Thompson (Other Press, August 2013): This one I got signed in-booth - thanks to another great review in the Kirkus BEA Guide. For some reason, multigenerational Southern gothic stories sound so good to me right now.

27. OCD Love Story, by Corey Ann Haydu (Simon and Schuster, July 2013): Got it in the goodie bag from the SimonTEEN party, about two kids who meet at an OCD support group and fall in love. Intriguing concept.

28. Chantress, by Amy Butler Greenfield (Simon and Schuster, out now): Another pick up from the SimonTEEN party, about a girl whose singing voice has magical powers.

30. Lily and Taylor (Groundwood, September 2013): When I was interviewing Canadian publishers, I had a nice chat at the booth for House of Anansi Press and got a copy of their newest YA title, about four kids struggling with the aftereffects of domestic abuse.

31. The Wolf Princess, by Cathryn Constable (Scholastic, October 2013): This was one of the free books given out at the start of BEA Blogger Con. I love the cover and the story has a distinct fairy tale vibe.

32. Heart Like Mine, by Amy Hatvany (Washington Square Press, out now): Picked it up as a lark. An uncertain stepmother has to help her new stepdaughter overcome the sudden death of her unstable mother.

33. The Twins, Saskia Sarginson (Redhook, August 2013): Picked this one up at random because the back cover blurb hinted at ssssssecrets. Plus - twins! Twin ssssssecrets!

And that's it for my swag! I picked up 44 books last year (and I still haven't read all of them!), so I consider this year's catch an improvement - in quality, if not in quantity. Which books are you excited to read?
Posted by AnimeJune at Sunday, June 16, 2013